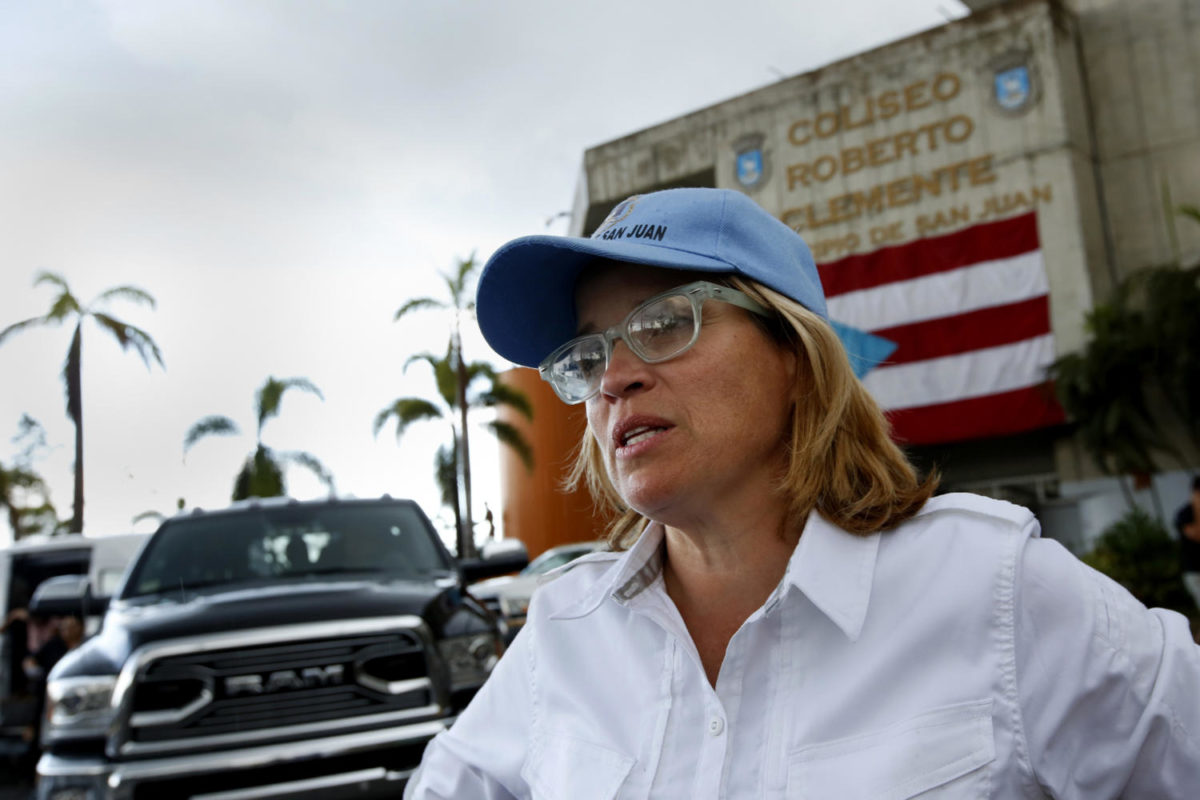 San Juan mayor Carmen Yulin Cruz, shown on Oct. 2, 2017, believes this is not the time for politics, including the discussion of statehood for Puerto Rico. She says all should come together to try to help the island recover. The debate over whether or not Puerto Rico should be given statehood has surfaced again with the attention hurricane Maria brought to the island. (Carolyn Cole/Los Angeles Times/TNS)

The island lacks voting representation in Congress or any power in presidential elections. Nearly everything costs more, including health care. And now, amid the devastation of Hurricane Maria, Puerto Rico has another reminder of its status as a non-state: the slow arrival of federal assistance.

President Donald Trump’s explanation for the difficulty of providing aid only reinforced its sense of isolation. “This is an island, surrounded by water,” he said. “Big water. Ocean water.”

With Trump scheduled to visit here Tuesday, the response to the disaster has revived a long-standing debate over the territory’s relationship to the rest of the United States and what could be done to address the inequalities.

“It is certainly the responsibility of all U.S. citizens to ask themselves if we believe in democracy, if we believe in rights and equality which are the pillars of our society, how can we still have a colonial territory with more than 3 million citizens that don’t have access to the same rights and the same political power?” Puerto Rico Gov. Ricardo Rossello told reporters Monday.

“Military veterans gave the same sacrifices to the nation they love, but they don’t get the same benefits just because they live over here,” he said.

Rossello — who said he plans to raise such questions of fairness with Trump on Tuesday — and his New Progressive Party argue that the first step to righting the wrongs is to make the island a state.

A significant number of Puerto Ricans appear to agree with him, based on five referendums held on the issue since 1967. The most recent, in June, offered voters three options: the current territorial status, statehood or independence in free association with the U.S.

Statehood won with 97 percent of the vote. But turnout was historically low at 23 percent, in part because of a boycott by the Popular Democratic Party, which favors the status quo.

Ultimately, Puerto Rico has little say in whether it becomes a state. That power rests with Congress — both the House and Senate would have to approve it — and the president, who would have to sign off on it. The last states to be added were Hawaii and Alaska in 1959.

The U.S. seized Puerto Rico in the Spanish-American War in 1898 and granted its people citizenship in 1917. They pay federal taxes, but the resident commissioner who represents them in Congress has no vote, and their votes in presidential elections are largely symbolic, since the island has no electoral votes.

The island’s deep economic crisis was already fueling new calls for statehood when Hurricane Maria hit last month. Its devastation has given new life to the campaign.

Jose Fuentes, chairman of the Washington-based Puerto Rico Statehood Council, said now is the time for Congress to put Puerto Rico “on the road to statehood” by bringing its tax, education and health care reimbursements in line with the mainland.

“The destruction in Puerto Rico gave the U.S. a chance to do the right thing and rebuild the territory as a state,” he said. “This is the time. Are we going to invest that money to rebuild Puerto Rico and be in the same position when another storm hits?”

The push for statehood has mixed support among members of Congress with Puerto Rican roots, advocates and political leaders on the island. Two of the island’s main political parties support either independence or a version of the current commonwealth status.

A member of the Popular Democratic Party, she noted that deep disparities in wealth, education and other economic-social indicators exist between U.S. states.

“I’m an advocate of a different relationship with the U.S. that allows us more power, more sovereignty, and that recognizes Puerto Rico as a Caribbean nation,” she said outside the city’s emergency operations center in Roberto Clemente Coliseum. “In the next few months we have to talk about what that relationship should be.”

She and other Puerto Rican mayors joined a conference call Monday with Trump’s Homeland Security adviser Tom Bossert and other administration officials, who she said “let us know the White House is very committed to making things work, that we’ve had some challenges but with the help of the mayors they hope things will go faster.”

Looming over the question of Puerto Rico’s status is the exodus of Puerto Ricans to the U.S. mainland, a process that was already being driven by economic hardship but seems poised to accelerate in the aftermath of Hurricane Maria, especially as shortages of power, gasoline, food and water persist.

“We don’t know if these folks are overwhelmingly pro-statehood, or pro-commonwealth. … We have no idea who’s leaving the island,” said Amilcar Barreto, an associate professor of political science, international affairs and public policy at Northeastern University.

For many Puerto Ricans, he said, “The status issue is about your identity: Do you identify as American? More Puerto Rican than American? That’s the nature of status politics. It’s like a marriage with all the emotional attachments.”

As Rossello pointed out, any Puerto Rican can simply move to the U.S. mainland and be guaranteed the full rights of all citizens.

On the streets of San Juan on Monday, it wasn’t hard to find support for statehood.

“I was born in New York. Now I live in Puerto Rico. I don’t have the same rights I had there?” said Peter Carasquillo, 50, a film writer and director who voted for statehood in the last referendum. “They should have taken up this issue a long time ago.”

He had lost his home in the hurricane and was waiting in a line for help from the Federal Emergency Management Agency. He hoped to stay on the island and rebuild.

“We are American,” said Baez, 34. “I lived in Miami for six months and there’s so much more help there: More medical help, education for children, opportunities to better yourself, to set up businesses.”

She and her father, a Pentecostal pastor 20 miles south in Naranjito, had come for help repairing their church, which lost its roof in the hurricane.

“We should become the 51st state,” said the Rev. Carlos Baez Rivera, 56. “I know the U.S. has its own problems, but we should be unified. We are part of the United States. We have problems the U.S. can help us with, like the economy, but mostly it’s the feeling inside, that we are American.”

But in Old San Juan, 73-year-old Jimmy Hastings, who was repairing his house and plans to stay, said he opposes statehood.