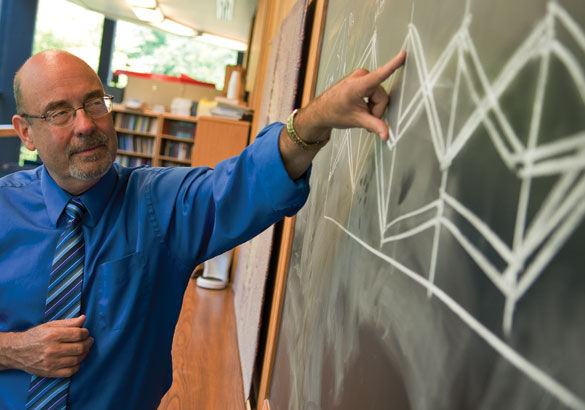 In basketball, the only numbers on the court used to be on the back of jerseys.

A research group from the SIU math department is using the men’s and women’s basketball statistics to try and find ways the teams can improve.

They based their work on Muthu Alagappan’s research, who used statistical software to study all 452 NBA players in the 2010-11 season. He found there are actually 13 role positions that are more in depth than the standard five starting positions in basketball- point guard, shooting guard, small forward, power forward and center.

Alagappan’s research showed a struggling team, the Minnesota Timberwolves, had only a couple of those 13 filled. But the Dallas Mavericks, who won the NBA Championship that year, had a wide variety in each of the 13 positions.

“We’re trying to do roughly the same thing, but at the college level,” Budzban said. “We want to find what the structural makeup is of the good teams.”

With Alagappan’s research in mind, Budzban, Staples and Li used the statistics of the 2013-14 season of all teams in the Missouri Valley Conference.

They normalized each statistic by the playing time of each player, eliminating players with less than 75 minutes played. They found how many halves of basketball played by dividing a player’s total minutes by 20. Then, they took players’ statistic totals and divided them by halves played. They created a max value for each statistic. For example, if SIU guard Anthony Beane Jr. had 300 assists and that led the league, that would be the max value. They then divided each player’s individual statistics by the max value. That created a number between zero and one, which created rankings for each player.

The statistics were put into a program called X-dimensional Data Analysis Tool, or XDAT, a free program that coordinates players with their rankings.

“I was really excited when I heard about this project,” Staples said. “I love math and I love sports so this was perfect for me.”

Working with the women’s data, Li said she found one major difference between the men’s and women’s game.

“Based on the height and weight and women, there are fewer centers,” she said. “If a girl is tall, she will be the center, most likely.”

She said having a talented center is a major advantage in women’s basketball because women are not normally as big as men.

Kathy Jones, senior associate athletic director, and Nate Mast, director of basketball operations, have been bridging the gap between the academics and athletics. They have helped facilitate Budzban and his researchers.

Mast gave the group access to the Synergy Sports website, which stores all of the team’s statistics.

Mast said he does not know if there are any immediate applications for the data, but finds the possibilities intriguing.

“The precedent that was set in the NBA has been successful,” he said. “Hopefully, we can further define these categories at the college level. We could eventually look at teams like UCONN, who won the championship this year, and see what categories they have and what we are missing.”

Jones said right now the project is just an interesting idea, but hopes this upcoming season can help make the data more useful.

“If the data creates this ‘aha’ moment, that is not something where the coach can say ‘Yeah, I knew that already,’ that’s when it’s going to be valuable,” she said.

Budzban said he hopes other math students will notice the work and want to get involved.

“I’ve been looking for interesting applications of statistics and data analysis, something that students would get interested in, but something we could also use as a recruitment tool,” he said. “Students would see this whole math thing has stuff you can actually do with it that’s not only interesting, but fun.”