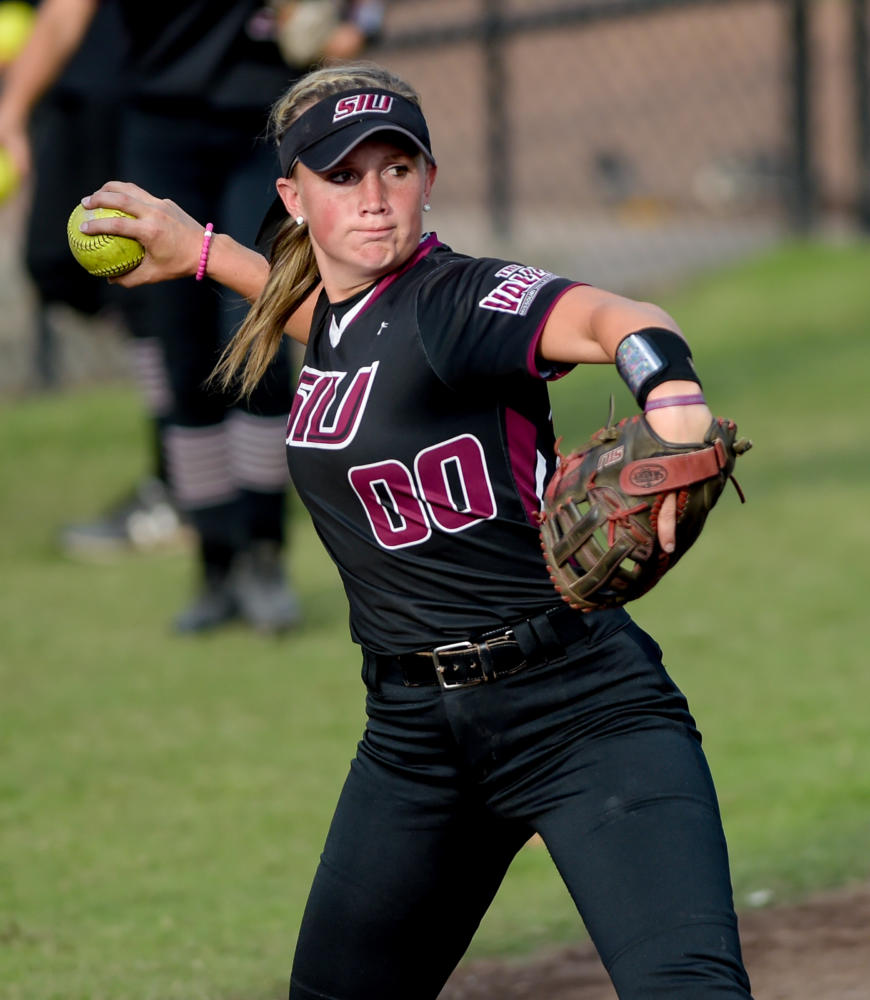 The SIU softball team wrapped up its Fall Ball season at Charlotte West Stadium Sunday afternoon with 3-2 wins over the University of Southern Indiana Screaming Eagles in game one and the Southeast Missouri State Redhawks in game two.

Senior pitcher Savanna Dover got the nod for the Salukis in the first game against the Screaming Eagles. She retired the first two hitters in the top of the first inning, but an error by senior third baseman Sydney Jones followed by back-to-back singles put the first run across the plate for USI.

Sophomore right fielder Susie Baranski led off the bottom half of the frame with double, but three straight strikeouts by USI pitcher Jennifer Leonhardt sent the Salukis back on defense empty handed.

Both starters continued to shine, retiring each of their next six batters.

Freshman infielder Jenny Jansen led off the bottom of the fourth with a hard hit double to left field, giving the Salukis their first base runner since the first inning. Jansen advanced to third on sophomore infielder Maddy Vermejan’s sacrifice bunt before scoring on sophomore catcher Katelyn Massa’s fielder’s choice to the shortstop to tie the game 1-1.

The Salukis took a 3-1 lead later in the inning when sophomore infielder Kyleigh Decker hit a two-run homer off the scoreboard in right field.

The Eagles threatened in the top of the fifth with runners at the corners and two outs, but Dover struck out USI pinch hitter Alex Logan to end the threat.

Dover’s day ended in the sixth inning after issuing back-to-back walks. She finished with 5.0 innings, surrendering one unearned run on four hits and two walks while striking out three.

Junior pitcher Brianna Jones relieved Dover, limiting the damage with two runners on, allowing only one runner to score on a fielder’s choice to the shortstop before closing out the top of the sixth inning.

Brianna Jones remained in the game in the top of the seventh inning with Southern up one run and shut down UNI to record the save, giving the Salukis a 3-2 win over the Screaming Eagles.

Brianna Jones started game two against the Southeast Missouri State Redhawks, carrying over the momentum from her game one closing role by allowing no baserunners in the top of the first.

The Salukis got on the board in the bottom of the first when senior catcher Sydney Jones crossed the plate to give Southern an early 1-0 lead.

Both pitchers cruised along from there, making it very difficult for either team to string together enough hits to put runs on the board.

The Redhawks tied the game in the top of the seventh when senior shortstop Savannah Fisher bobbled a ground ball and then made an errant throw to third base, allowing SEMO’s runner from second that advanced on the initial error to come around and score.

SEMO took a 2-1 lead in extra innings off of a triple and a sacrifice fly.

In the bottom half of the eighth inning, freshman outfielder Maris Boelens hit a single to left field and was able to advance to second when SEMO’s left fielder misplayed the ball. With one out and a runner in scoring position, Vergeran singled to drive in Boelens to tie the game.

With Boelens in scoring position due to another fielding miscue by a Redhawks outfielder, Massa drove an RBI-single into center field to score Boelens and give the Salukis a 3-2 walk-off win to end their Fall Ball season.

“Those kids stepped up,” coach Kerri Blaylock said following the second game. “Maris [Boelens], Maddy [Vermejan] and Katelyn [Massa] all stepped up there at the end.”

Blaylock felt great about the Salukis’ play this fall and going forward into the spring season.

“It’s good for us to get out there and see each other and get after it,” Blaylock said. “I’m really glad we had a walk-off win to give us a boost as we go into our speed, conditioning, and strength training phase.”

Great pitching was the theme today, with Southern pitchers only allowing two earned runs through both games.

Brianna Jones shined today, pitching 10 innings total through two games, allowing two runs (one earned) while striking out seven. She recorded the save in game one and the win in game two.

The defending MVC Champion Salukis finished 7-1 this fall and look forward to battling for their second conference championship in a row in the 2018 spring season.

Sports reporter Jacob Selsor can be reached at [email protected] or on Twitter at @jacobselsor_DE.