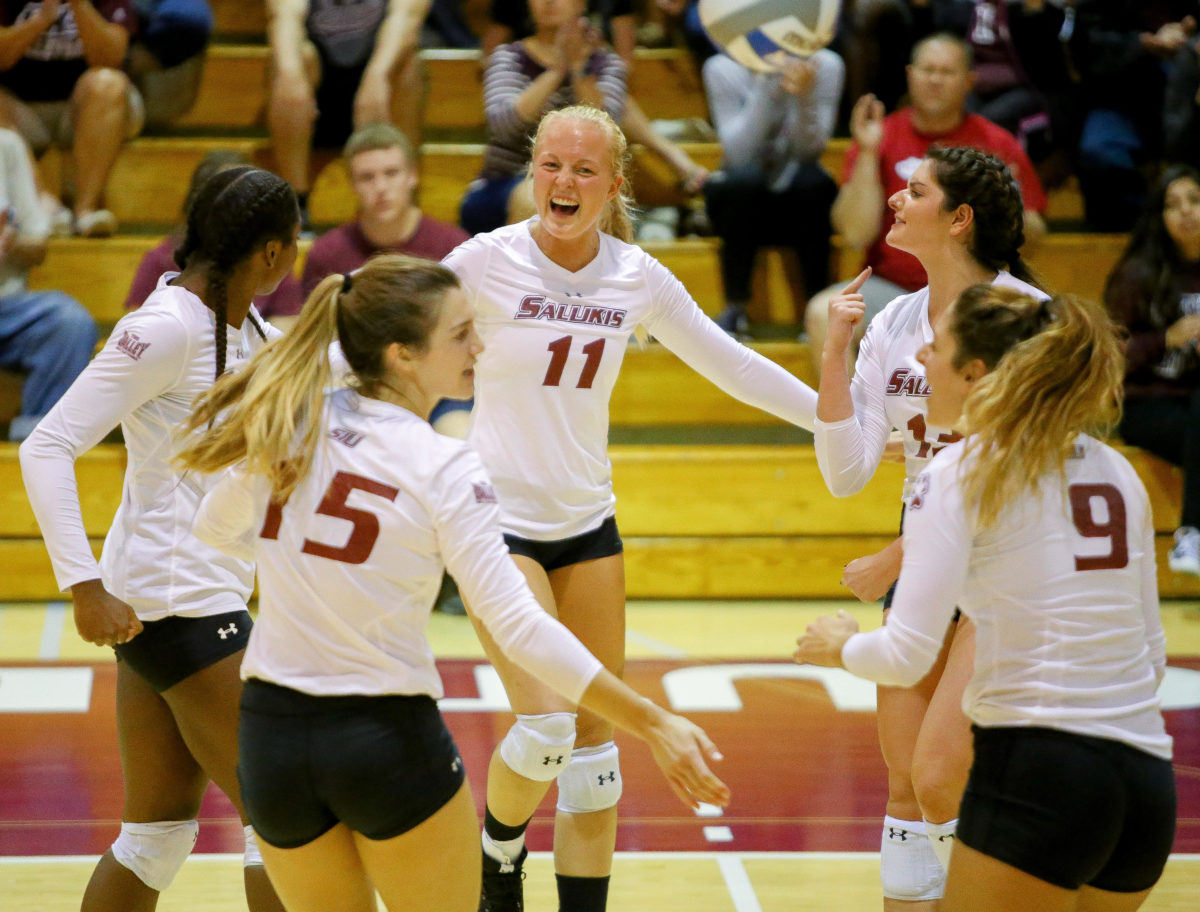 SIU came into the game looking to capitalize on a weaker conference opponent. However, they were in store for a battle, as Evansville (6-9, 0-3 MVC), led by their sophomore outside hitter Rachel Tam with a whopping 27 kills, came to test the Salukis

The first set saw both teams trading points early. The Purple Aces burst ahead with a three-point run at the midpoint of the set, taking a 10-8 lead. Southern quickly responded with a four-point run of their own to retake the lead and control of the set.

Evansville rode a back-and-forth second half to the set to a  24-23 lead, forcing a strategic Saluki timeout. A kill by senior outside hitter Nellie Fredriksson tied the match following the timeout, but Evansville claimed the next two points to claim the first set 26-24.

The second set began with a quick 4-0 run by the Purple Aces. The Salukis battled back from the early advantage to close within one point of Evansville at 21-20, but were unable to move into the lead, losing the second set 25-21 to Evansville.

After the second intermission, SIU came out firing on all cylinders. The set was swarmed with Southern scoring runs, with four different three-point runs and a match-best six-point run leading the Salukis to a dominant 25-10 third set win.

After claiming the third set to move the match score to 2-1 and stave off the sweep, everything started clicking for the Saluki offense.

The fourth set saw a quick three-point run by Southern to take a quick 4-1 lead. Evansville did not go away quietly, riding a four-point run to a 16-15 set lead.

SIU regained control late in the fourth set, as they worked a 21-21 tie before riding a four-point run to finish off the set win 25-21 and tie the match 2-2..

The final set was well fought on both sides. Both teams continuously exchanged points to an 11-11 tie. From there, Southern blasted off a three-point run to reach match point.

However, the Aces rallied with a three-point run of their own to tie it up at 14 points apiece. The teams then traded points until a kill by senior captain outside hitter Andrea Estrada gave the Salukis a 17-15 set win and the 3-2 match victory.

“The first two sets were completely unnecessary, we played awful,” Estrada said. “We learned our lesson today that even if the opponent isn’t supposed to beat us, we need to play hard regardless.”

Four Salukis reached double-digit kills in the match. Fredriksson finished with a team-high 14 kills, matching her career high, while posting a .444 hitting percentage.

Junior middle hitter Patience Brown and senior outside hitter Abby Barrow each recorded 12 kills, with the former also collecting a career- and team-high eight blocks in the match. Freshman outside hitter Maggie Nedoma contributed with 10 kills as well.

Senior defensive libero Ashley Edelen had a career- and team-high 29 digs in the contest.

“I especially like the way we came out in set three,”coach Kari Thompson said. “Evansville really fought, and we didn’t really match their defensive mentality until the third set.”