NFL players kneeling during national anthem: How Colin Kaepernick started a movement and why 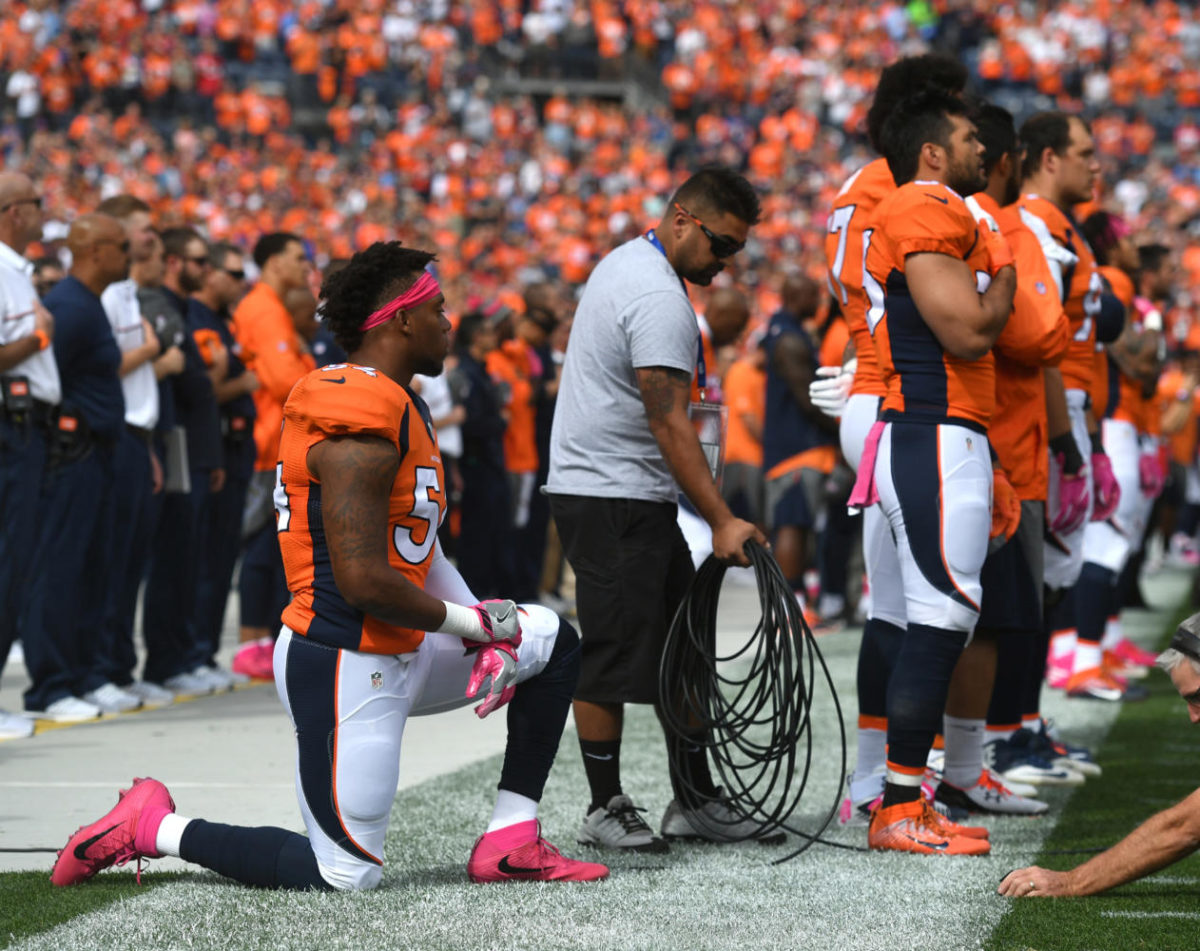 Denver Broncos' Brandon Marshall kneels during the national anthem before a game against the Atlanta Falcons on Sunday, Oct. 9, 2016 at Sports Authority Field at Mile High in Denver, Colo. (Mark Reis/Colorado Springs Gazette/TNS)

President Donald Trump has found himself at odds with a number of National Football League players, coaches and staff over the decision by some to kneel during the national anthem.

The feud between the NFL and the president began on Sept. 22 during a political rally in Alabama where Trump called any player that kneeled during the national anthem a “son of a b–,” and said they should be fired.

Outraged by the president’s rhetoric, many NFL players took a knee during the singing of the national anthem at games the following Sunday, while others stayed in locker rooms or linked arms with their teammates.

In the ensuing days, Trump has defended his initial statement, supported a boycott of the NFL and called on the league to outright ban kneeling during the national anthem.

But despite the recent media attention, the act of peaceful protest during the national anthem at NFL games has actually been going on since the 2016 season, when then-San Francisco 49ers quarterback Colin Kaepernick remained seated during the song before the team’s first preseason game.

Kaepernick started the 2016 preseason off by refusing to stand during the national anthem, but it wasn’t until the 49ers’ third preseason game on Aug. 26 that anyone took notice. Following the game, Kaepernick told NFL.com that he chose to remain seated during the traditional singing of the national anthem as a way to peacefully protest the shootings of unarmed black people and police brutality in the country.

“I am not going to stand up to show pride in a flag for a country that oppresses black people and people of color,” Kaepernick told NFL Media in an exclusive interview. “To me, this is bigger than football and it would be selfish on my part to look the other way. There are bodies in the street and people getting paid leave and getting away with murder.”

In a recent New York Times Op-Ed, 49ers safety Eric Reid said he also didn’t notice his teammate’s silent protest until that third preseason game against the Green Bay Packers, but once he realized what was going on he wanted to support Kaepernick and his message.

“I approached Colin the Saturday before our next game to discuss how I could get involved with the cause but also how we could make a more powerful and positive impact on the social justice movement. We spoke at length about many of the issues that face our community, including systemic oppression against people of color, police brutality and the criminal justice system,” Reid wrote in The Times op-ed. “We also discussed how we could use our platform, provided to us by being professional athletes in the NFL, to speak for those who are voiceless.”

On Sept. 1, 2016, during the 49ers’ next preseason game, Kaepernick and Reid kneeled together during the singing of the national anthem.

The pair, Reid said, had made the decision to switch to a kneeling position after speaking with former NFL player and retired Green Beret Nate Boyer.

“We chose to kneel because it’s a respectful gesture. I remember thinking our posture was like a flag flown at half-mast to mark a tragedy,” Reid wrote in The Times op-ed.

Following that first Aug. 26, 2016, game when people took notice of Kaepernick sitting, the 49ers and the NFL issued statements, both of which acknowledged that NFL players had a choice on whether to participate in standing for the national anthem.

“Players are encouraged but not required to stand during the playing of the national anthem,” the NFL had said in a statement.

But the backlash from the American public was swift. Even as more players joined in kneeling during the national anthem and others spoke out in support of his message, Kaepernick was crowned the least liked player in the league in a survey by E-Poll Marketing Research released in September 2016, ESPN reported.

Reid had lamented in The Times that the protest touched off by Kaepernick was — and still is — misconstrued as disrespectful to the flag, military veterans and the country as a whole.

“It has always been my understanding that the brave men and women who fought and died for our country did so to ensure that we could live in a fair and free society, which includes the right to speak out in protest,” he wrote.

Kaepernick’s kneeling had further polarized a league that holds strong team allegiances. While those who disagreed with the protest burned the quarterback’s jersey and professed to boycott the NFL, others shouted words of encouragement from the sidelines and on social media.

Kaepernick ended the season by opting out of his contract with the 49ers. He remains unsigned by another team as of September 2017.

Reid said he believes the reason Kaepernick remains unsigned is due to his politics, while others argue he’s not good enough.

The responses weren’t all furious, however, and a movement that mixed one of the most popular sports in the country with political activism continued into the 2017 season, even in Kaepernick’s absence.

While some NFL players continued to kneel during the NFL preseason in 2017, their actions had gone largely ignored by most media outlets that don’t already heavily cover sports — that is, until Trump spoke up.

On Sept. 22, while speaking at a political rally in Alabama, Trump told the crowd he believed that NFL players who kneel during the national anthem should be fired.

“Get that son of a b– off the field right now. Out! He’s fired,” Trump had said in reference to the kneeling protest.

The remark drew immediate criticism from members of the NFL, as well as other politicians, celebrities and activists.

NFL Commissioner Roger Goodell said Trump’s comments revealed an “unfortunate lack of respect” for the league and its players.

“Divisive comments like these demonstrate an unfortunate lack of respect for the NFL, our great game and all of our players, and a failure to understand the overwhelming force for good our clubs and players represent in our communities,” Goodell said in a statement released on Sept. 23.

The union representing professional football players also rejected Trump’s comment, saying it would defend their right to freedom of expression.

“This union will never back down when it comes to protecting the constitutional rights of our players as citizens,” tweeted DeMaurice Smith, executive director of the National Football League Players Association, referring to the First Amendment’s guarantee of the right to free speech.

On Sunday, teams and players across the country took a stand against the president’s comments by kneeling or linking arms with teammates. Some teams opted to stay in their locker rooms during the national anthem ahead of their respective games.

In the days since, Trump has defended his original statements in news conferences and on Twitter, has rallied a boycott against the NFL and said the league should make a rule against kneeling during the national anthem.

“If NFL fans refuse to go to games until players stop disrespecting our Flag & Country, you will see change take place fast,” Trump wrote in a series of tweets on Sunday. “Fire or suspend!”

Trump’s comments galvanized those who felt strongly opposed to the kneeling protest into action. Football fans once again outraged over the controversy posted videos of burned jerseys, game tickets and other memorabilia on social media under the hashtag #NFLBurnNotice.

As evidence of how polarizing the protest has become, the hashtag #ImWithKap, in reference to Kaepernick, also gained traction on Twitter. Many supporters also posted photos of themselves or others taking a knee with the hashtag #takeaknee.

On Wednesday, members of the New York City Council took a knee on the steps of City Hall to show their support for the NFL and the movement Kaepernick sparked.

“We decided it was time to show again that one, we believe in free speech and two, that protesting is the most American thing one can do; it is in fact the only thing that ever propelled this country to move forward,” said Councilman Jumaane D. Williams (D-Brooklyn) of the group’s message to Trump.

Many have argued that the controversy has taken away from political discourse on myriad topics, including a new travel ban, health care and tax reform, and the devastation in Puerto Rico in the aftermath of Hurricane Maria.

Caught off guard by the severity of Hurricane Maria’s damage to the U.S. island territory, Trump did not focus on the storm for days. Trump came under fire after he tweeted more than a dozen times about the NFL while only posting a series of three connected tweets about Puerto Rico in the same amount of time.

“Texas & Florida are doing great but Puerto Rico, which was already suffering from broken infrastructure & massive debt, is in deep trouble…It’s old electrical grid, which was in terrible shape, was devastated. Much of the Island was destroyed, with billions of dollars…” Trump tweeted on Sept. 25. “…owed to Wall Street and the banks which, sadly, must be dealt with. Food, water and medical are top priorities — and doing well. #FEMA”

Trump insisted to reporters on Tuesday that he was not preoccupied with the NFL controversy and that he could multi-task. He said he would visit Puerto Rico in the following week.

But with the territory’s 3.4 million people struggling to get food, water, power and shelter, Democratic leaders in Congress and some Puerto Rico residents, who are U.S. citizens, accused the Trump administration of being more sluggish in its response than to disasters on the U.S. mainland.

Mayor Bill de Blasio — who sent a task force of specially trained NYPD, FDNY and EMS personnel to Puerto Rico in the immediate aftermath of the storm — announced Wednesday that additional emergency management experts and FDNY members would be deployed to the area, bringing the total number of city workers on the ground to 147.

The White House, meanwhile, stepped up its efforts to show Trump in charge of the crisis, organizing a meeting of major Cabinet officials to go over the federal response to Puerto Rico. An official photo of the meeting in the Situation Room showed Trump at the head of a long table, getting briefed on the crisis.