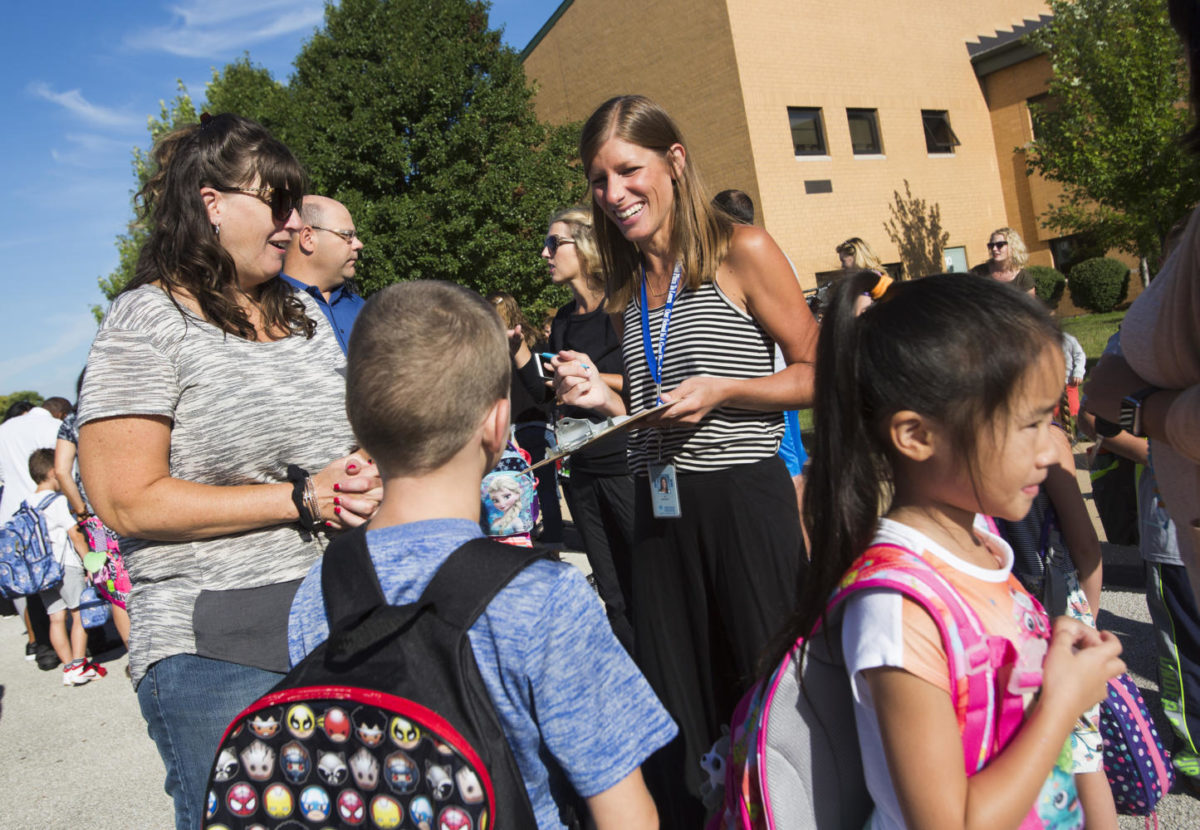 A teacher chats with students at Kendall Elementary School in Naperville in 2016. College and universities are trying to figure out how to attract more students into the education profession to reduce the nationwide teacher shortage. (Mike Mantucca/Chicago Tribune/TNS)

Colleges and universities are trying to figure out how to entice more people into the teaching careers to fill vacancies, a dilemma that down the road could pose ramifications throughout educational leadership.

The U.S. Department of Education data on the 2017-18 school year shows nearly every state experienced difficulty hiring qualified teachers in such fields as special education, mathematics, science and world languages.

Part of the reason for the shortage is the number of students enrolling in teacher education programs nationwide dropped 35 percent between 2009 and 2014, according to the Learning Policy Institute. That, the institute says, translates to nearly 240,000 fewer teachers entering the classroom in 2014 compared to 2009.

The long-term effects of the teacher shortages could send repercussions up the educational ladder if colleges and universities don’t start pumping more teachers into the pipeline, warns Jan Fitzsimmons, executive director of the Urban Education Laboratory at North Central College.

Because principals, administrators and teacher educators often start their careers as teachers, as the pool of teachers shrinks, so does the pool for administration positions, she said.

With so many career options these days, attracting more teacher candidates to the education system has been a challenge, even for Naperville-area colleges and universities.

The decision to pursue a teaching career often comes down to economics, said Richard Campbell, acting dean of Benedictine University’s College of Education and Health Services.

Students coming out of a four-year college want to know whether they’ll be able to pay off their student loans with their teacher salaries, and Campbell said careers in fields of STEM — science, technology, engineering and mathematics — are far more attractive.

“Teacher pay has not increased at the same rate as other professions,” and as a result, Campbell said, “salaries are still low for the teaching profession.”

Bureau of Labor Statistics data for 2016 shows the mean salary for those in architectural or engineering occupations in the Chicago metropolitan area is $81,600. That includes drafters with an associate’s degree, who earn a median income in the Chicago area of $52,170, to bachelor-degreed petroleum engineers, who earn median annual income is $138,590, according BLS figures.

Parents, who might have to co-sign for student loan debt, see the downside economically of a career where a master’s degree — even more debt — is needed in order to pay off the loans.

“A lot of time it’s parents and families that sway young people away from teaching,” Fitzsimmons said.

Above the costs of tuition and room and board, she said, education majors have expenses not covered by scholarships or financial aid.

Fees for assessment tests as well as transportation costs for classroom observations and student teaching can rack up, she said. Students also need to dress professionally when the go into the classroom and often need to purchase appropriate clothing.

“There are a lot of extra costs, which can be burdensome,” she said.

Working a job to pay for college can be at a disadvantage for education majors, she said, because the expectation is they’ll have no other duties while student teaching.

“A whole semester without working might not be possible,” she said. “We need to think about ways to help them through these hurdles.”

Whether it’s constantly changing expectations in the classroom or the feeling they don’t have a voice in the school district, Campbell said, “teachers overall do not believe they have the respect in their profession.”

MeShelda Jackson, department chair in the School of Education at Benedictine University, said classroom sizes of 25 to 30 students for first- and second-grade teachers are a challenge because they must develop lessons to accommodate every student in the classroom.

Teachers can get frustrated because they can’t provide the needed one-to-one contact young pupils needs, she said.

Another problem facing many school districts is attracting minority teachers. “Everybody wants to diversity their workforce,” Fitzsimmons said.

Jackson said programs like the NAACP’s Afro-Academic, Cultural, Technological and Scientific Olympics, or ACT-SO, are steering many African-American students into fields outside of education.

Founded in 1978, ACT-SO was created to recognize and reward black students who exemplify scholastic and artistic excellence.

Jackson said students experience opportunities open to them beyond the teaching profession.

“Even parents don’t see teaching is the best thing for their children,” she said.

The best place for a school district to search for education graduates, minority or otherwise, is in the district’s own backyard, Campbell said.

In general, students who attend college in a location that’s like where they were raised are more likely to get a job in a similar location, he said.

Despite attempts by Benedictine University to increase its minority enrollment by encouraging students in Chicago to tour the campus, more often the students will pick a college in Chicago, Campbell said. The same applies to students from rural areas.

Unless are incentives offered to overcome that familiar tie, Campbell said he doubts a student from out of the area would want to move into the western suburbs.

That idea of proximity is one reason school districts like Indian Prairie District 204, Elgin U46 and Oswego District 308 are trying the home-grown approach.

As such, high schools are identifying students who might make quality teachers and encouraging them to get involved with organizations such as the Future Educators of America or Future Teachers clubs.

Fitzsimmons said strong teachers provide a service to the community by setting groundwork for tomorrow’s leaders.

She suggests school districts support teacher growth by providing opportunities for new teachers to be mentored by experienced teachers and giving all teachers more time to plan and collaborate as well ways to further their education.