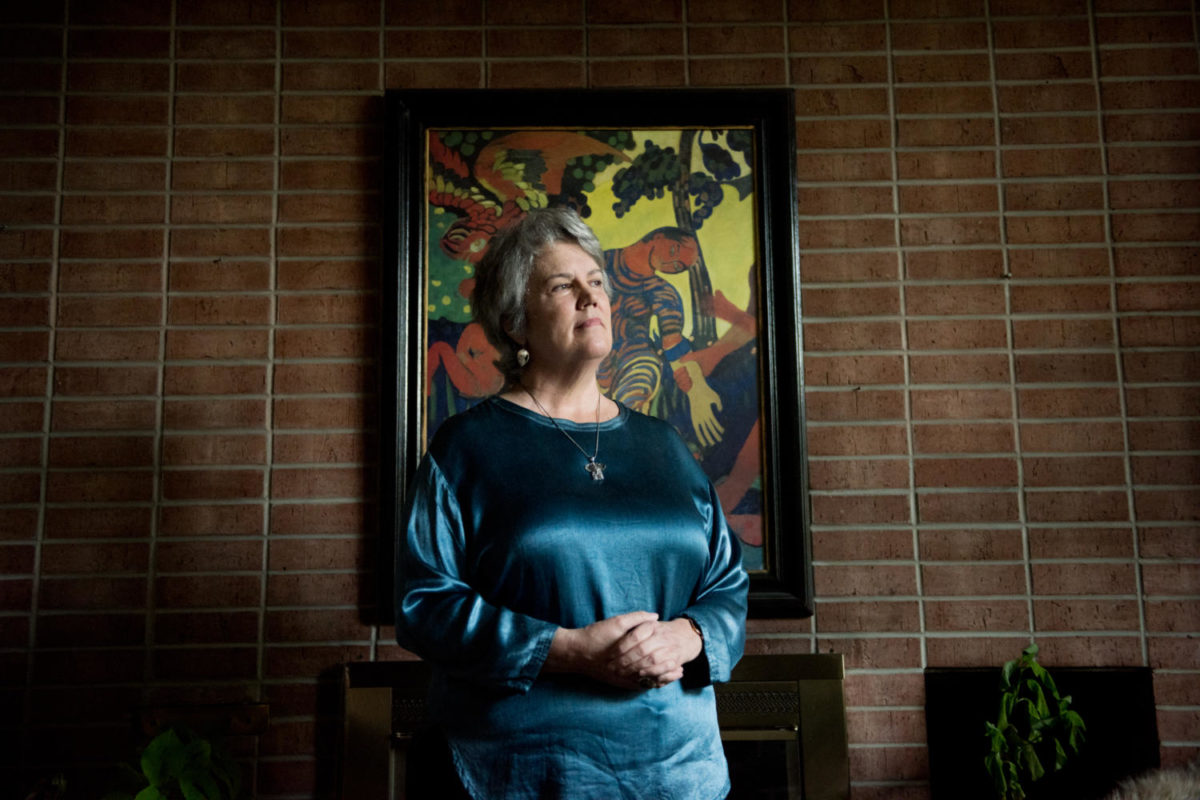 Political science professor Virginia Tilley, of Gainesville, Florida, poses for a portrait Friday, Sept. 22, 2017 at her home in Carbondale. Tilley specializes in comparative and international politics of ethnic and racial conflict. Tilley was recently subject of controversy for a report she co-wrote with Richard Faulk accusing Israel of apartheid, which was released and subsequently retracted in March 2017 by the United Nations Economic and Social Commission for Western Asia. (Brian Muñoz | @BrianMMunoz)

Political science professor Virginia Tilley has spent much of her 30 years in academia studying discrimination.

After receiving her bachelor’s degree in political science from Antioch College in 1985, Tilley took time off before getting her advanced degrees to travel the world and get an up-close look at the conflicts she had learned about in the classroom.

Her first stop was a study abroad stint in Jerusalem, and it was there she said she realized a lot of what she read about the Israeli-Palestinian conflict was true.

Tilley said this sparked in her a moral imperative to do something about the human suffering that she saw.

After going between Israel and Palestine a number of times and learning from professors and her own observations, Tilley said it was obvious to her this was oppression.

The Israeli-Palestinian conflict dates back to the late 19th and early 20th century. It is rooted in Arab and Jewish nationalist movements, with both sides seeking territorial sovereignty in the Middle East.

Though Israel was officially recognized as a state by the United Nations in 1947, territorial wars have been fought over the years. Since 1994, Israel has received both condemnation and praise from various nations for establishing settlements on Palestinian-controlled territory in the West Bank. This has been a focus of Tilley’s work throughout her career.

After her time in Israel, Tilley earned her first master’s degree Arab studies from Georgetown University in 1988. She later received her second master’s and her doctorate in political science from the University of Wisconsin-Madison in 1994 and 1997, respectively.

Though her academic pursuits eventually took her to many other places in the world, Tilley said she never took her eye off of that region of the world. While she was doing work in Central America in 2003, she said she began to realize that a two-state solution to the Israeli-Palestinian conflict was unlikely.

This led her to write an essay that was published in the London Review of Books in November of 2003 about that belief. When the essay came out, Tilley said she received a phone call from University of Michigan Press asking her if she wanted to write a book about the conflict.

“I remember spreading all of the books off of my desk and just saying ‘Yes, I do!’” Tilley said.

Over time, Tilley and other academics started to look at the Israeli-Palestinian conflict in a different way, asking a different question: was Israel guilty of apartheid?

Academics are very careful about using that label, Tilley said.

“If people are calling this apartheid, I don’t want to call it apartheid unless I know something more about apartheid than I do,” Tilley said.

For Tilley, there was one place in particular she had to go to learn about apartheid: South Africa.

Though she arrived in the spring of 2005 after the fall of South African apartheid — which is an institutionalized system of segregation — she said she wanted to compare what happened there with what was happening between Israel and Palestine.

What started as a leave of absence from a tenured position at Hobart and William Smith Colleges, which she received in 2003, led to Tilley taking a research assistantship in South Africa for six years.

After her contract expired in South Africa, Tilley said she felt the siren call to return back to academia. Rather than going back to the United States, Tilley took a position at the University of the South Pacific at Suva in Fiji.

However, fate — and the acrid salty air of the South Pacific — brought Tilley to SIU three years ago. Though her international experience could have taken her many places in the world, Tilley said SIU’s academic culture drew her in.

“I knew Carbondale,” Tilley said. “Carbondale had a really good reputation as an intellectual center, a research center. Lots of really interesting things going on in Carbondale.”

Though no longer abroad studying the conflict, Tilley continued to participate in the Israeli-Palestinian conversation.

In March, Tilley co-authored a report with Princeton professor emeritus Richard Falk that was commissioned by the United Nations Economic and Social Commission for Western Asia.

The report’s purpose was to answer the question of whether or not Israel was guilty of apartheid, Tilley said.

“We didn’t exactly accuse Israel of being an apartheid state,” Tilley said. “What we did was look at the international law that defines what apartheid is, and then we looked at what Israel was doing, and we said, ‘Yeah, that’s the same.’”

Tilley said the report received wonderful reviews from academics, scholars and jurists from all over the world when it was released.

Still, not everyone was thrilled with the conclusion. Tilley said the Israeli delegation to the UN was less than pleased and flew in to speak with UN Secretary General António Guterres to demand it be withdrawn.

It also drew condemnation from the UN Ambassador Nikki Haley, who dismissed the report as “anti-Israeli propaganda.”

Tilley soon received salls from the New York Times, the Washington Post, the London Guardian and press outlets from Russia, India and Brazil, she said. The chair of the UN commission, Rema Khalaf, resigned in protest over the reports withdrawal, which prompted another round of global media coverage.

“It hit the fan,” Tilley said.

Nahshon compared the report to the Nazi propaganda publication “Der Stürmer.” Tilley said that comparison and the charges of anti-semitism were completely unfounded.

“We had no negative reviews of the report, nothing. They couldn’t find anything to criticize in the report at all,” Tilley said. “I challenge any of them to find anything I have every written or any group or any friend I have ever had the is anti-semitic. I don’t tolerate that. I consider that to be exactly in the same package of evils as apartheid — it’s racism.”

Even after receiving such harsh criticisms for her work, Tilley said she isn’t giving up studying the conflict.

“If you want to get me really stubborn, you try to bully me,” Tilley said. “That’s when I dig in my heels. I know what’s at stake. We are talking about millions of people’s lives being ruined by this regime.”

Out of all the negative attention Tilley received for the report, she said there was a positive: all the support she received from her SIU colleagues.

Tilley said she wrote an email to university administration explaining the feedback from the report, both the good and the bad. One senior university official asked Tilley if a letter of support should be composed, an act Tilley said meant a lot to her.

“I thought, ‘Yeah, I came to the right university,’” Tilley said. “These are serious academics. They are ready to protect freedom of research and academic freedom.”

As a professor, Tilley said she expects that same serious dedication to academics from her students. She said her classes do not come with light workloads.

“Unfortunately, there is a culture on too many university campuses, and Carbondale is not immune from this, where students will read the first page or two and kind of fake it,” Tilley said. “They are not going to get it doing that. They are not going to be able to get the good jobs with the skills they’ll develop doing that sort of thing.”

Tilley said the K-12 system has insulted the intelligence of young people by teaching them only how to pass a test.

She said this generation is full of caring and thoughtful people who, when given a chance to have thought-provoking discussions, are on the edge of their seats.