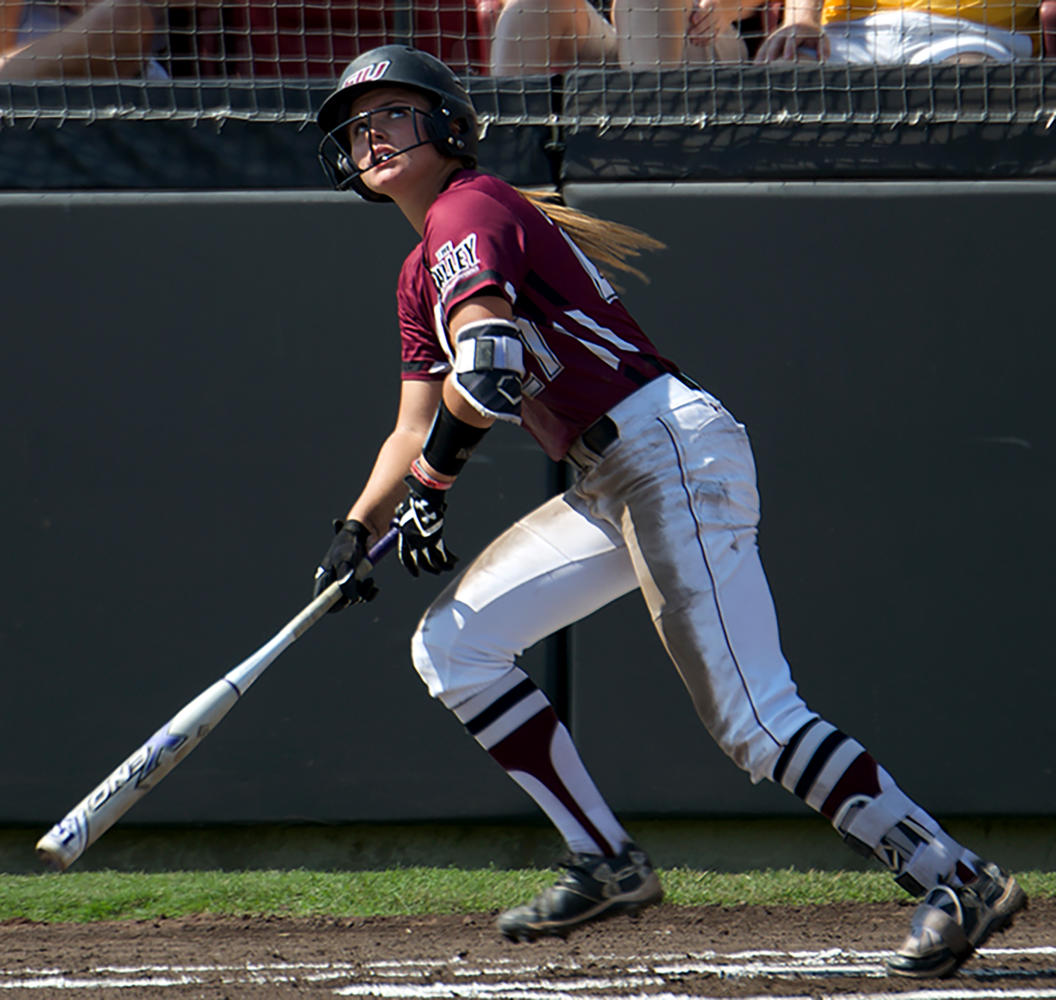 SIU softball won both games of its doubleheader Saturday at Charlotte West Stadium, taking the first game against the Lake Land College Lakers 5-0 and the second against the University of Missouri-St Louis Tritons 10-1.

Junior starting pitcher Brianna Jones toed the rubber for the Salukis in game one of the doubleheader Saturday.

She held the Lakers to very little offensive productivity throughout the game, logging a complete game shutout totaling 7.0 innings, allowing six hits and no walks while striking out eight batters.

Senior third baseman Sydney Jones put the Salukis on the board early, scoring junior left fielder Eyrika Brandenburg with an RBI single in the bottom of the first inning to take an early 1-0 lead.

In the bottom half of the second, sophomore first baseman Kyleigh Decker launched a 2-run homer to add to SIU’s lead 3-0.

Sydney Jones launched a bases-clearing triple into the right-center gap in the bottom of the sixth inning to give the Salukis a commanding 5-0 lead.

Brianna Jones finished off Lakeland College with a 1-2-3 top of the seventh to secure the win for SIU. For the sake of the scrimmage, the game was continued into the bottom half of the seventh to allow Southern hitters to earn more at-bats — but the Salukis went three-up-three-down to end the game.

Southern bats were hot to start off game two of the doubleheader against UMSL. RBI singles by Decker and sophomore catcher Katelyn Massa scored Baranski and freshman center fielder Jenny Jansen to give SIU a 2-0 lead after the first inning.

The Salukis played well in the second matchup behind senior starting pitcher Savanna Dover. She held UMSL scoreless with little activity in the first three innings, only allowing two hits.

SIU took a commanding lead in its half of the third, sparked by an RBI triple from sophomore second baseman Maddy Vermejon that scored Baranski. Massa followed with an RBI single, and Decker claimed an RBI triple of her own to give the Salukis a comfortable 5-0 lead after three complete innings.

UMSL got on the board in the fourth after three consecutive singles to begin the inning put Dover in the hot seat. She rallied through, only allowing one run to score to make it 5-1 in favor of Southern.

After being held scoreless in the fourth, the Salukis scored in the bottom half of the fifth on a 2-RBI double by senior infielder/designated hitter Haley Andrus for a 7-1 lead.

Southern added three more runs in the sixth, with freshman outfielder Maris Boelens driving home Jansen with an RBI single followed by Decker driving in Boelens and sophomore utility player Bailee Pulley with a two-RBI double, giving the Salukis a 10-1 lead heading into the final inning.

Dover held the Tritons scoreless through the fifth, sixth, and seventh innings to preserve the Saluki lead and 10-1 win. Dover pitched a 7.0 inning complete game, allowing one run on six hits and three walks while striking out four.

Briana Jones and Dover both held their own, pitching complete games in each of their respective Saluki victories.The Saluki defense played near perfect behind them, only recorded one error through both games.

Decker had a tremendous day at the plate, batting 3-for-6 with five RBIs, highlighted by her two-run shot over the wall in game one.

“They’re hitting the ball very well,” Blaylock said. “Overall, it was a really good day. We have great progress heading into our last week.”

SIU (5-1) closes out Fall Ball play next Sunday at Charlotte West Stadium. Game one against the University of Southern Indiana Screaming Eagles is slated for 2 p.m., with game two against the Southeast Missouri State Redhawks to begin at 4 p.m.