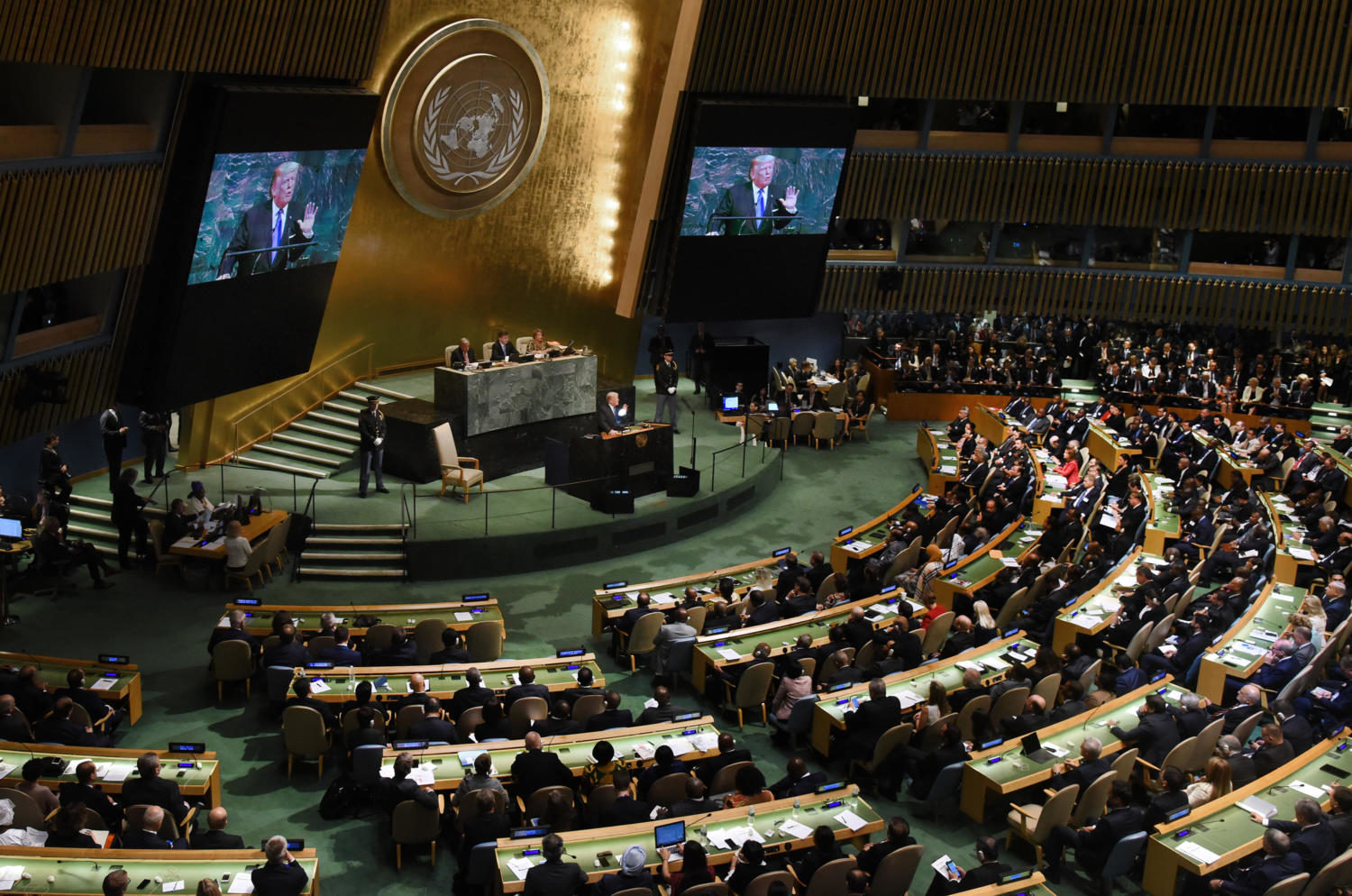 President Donald Trump delivered a forceful inaugural speech to a packed U.N. General Assembly on Tuesday, a sprawling 42-minute address — warlike at times, flowery at others — that challenged some tenets of U.S. foreign policy.

With the cavernous hall packed so full that scores of people jammed into the aisles, Trump caused a stir when he mocked North Korea’s ruler, Kim Jong Un, as “Rocket Man on a suicide mission” and threatened his “depraved regime.”

“The United States has great strength and patience, but if it is forced to defend itself or its allies, we will have no choice but to totally destroy North Korea,” Trump added.

Another buzz arose when he warned that parts of the world “are going to hell.” He also vowed to “crush loser terrorists” and condemned a “small group of rogue regimes,” including Iran, for threatening global stability.

“Rogue regimes represented in this body not only support terrorists, but threaten other nations and their own people with the most destructive weapons known to humanity,” he said.

Trump first tried out his “Rocket Man” insult in a tweet Sunday, and his U.N. speech was laced with some of the harsh language and colloquialisms that have delighted his base and horrified his critics.

But Trump also praised U.N. humanitarian aid and development programs that have fought famines and disease, helped victims after wars and disasters, sheltered millions of refugees and educated women and girls.

He applauded U.N. peacekeeping operations for stabilizing conflicts in Africa and complemented Secretary-General Antonio Guterres — who, like Trump, also took office in January — for leading efforts to make U.N. operations and agencies more efficient, taking on a problem as old as the institution.

He called for restoration of democracy and political freedoms in Venezuela and cited the “enormous potential waiting to be released” around the world.

“To put it simply, we meet at a time of both immense promise and great peril,” he said.

“If the righteous many do not confront the wicked few, then evil will triumph,” he added. “When decent people and nations become bystanders to history, the forces of destruction only gather power and strength,” he said.

“Now we are calling for a great awakening of nations, for the revival of their spirits, their pride, their people and their patriotism,” he added. “History is asking us whether we are up to the task.”

Trump began, as he often does in public gatherings, by boasting about his time in office.

The United States “has done very well since Election Day,” he said, claiming credit for a rising stock market, low unemployment and a military that he said “will soon be the strongest it has ever been.”

Trump jettisoned traditional U.S. positions advocating for human rights and democratic reforms as part of his “America first” doctrine. He instead promoted national sovereignty as the bedrock of international cooperation, calling it key to his foreign policy.

“In foreign affairs, we are renewing this founding principle of sovereignty,” he said.

Without mentioning Russia or China by name, he said that “we must reject threats to sovereignty, from the Ukraine to the South China Sea.”

The United States and its allies have accused Russia of illegally seizing the Crimean peninsula and backing an armed insurgency in eastern Ukraine, and have sought to counter China as it builds up disputed islands and shoals in the resource-rich South China Sea.

Trump has used that argument to try to renegotiate the North American Free Trade Agreement, to announce plans to withdraw from the 200-nation Paris agreement on climate change and to refuse to support an 11-nation trans-Pacific trade agreement.

He also renewed hints that he would withdraw from the landmark nuclear disarmament deal with Iran, which he called “a corrupt dictatorship” and “a murderous regime.”

The 2015 deal, which eased international sanctions in exchange for Iran’s destroying or dismantling its nuclear development infrastructure, was blessed by the U.N. Security Council and is monitored by a U.N. nuclear watchdog agency.

“We cannot abide by an agreement if it provides cover for the eventual construction of a nuclear program,” Trump said.

He called it “one of the worst and most one-sided transactions the United States has ever entered into” and “an embarrassment to the United States. And I don’t think you’ve heard the last of it, believe me.”

The Trump administration faces an Oct. 15 deadline to certify to Congress that Iran is complying with its obligations under the deal. If Trump refuses, Congress will have 60 days to decide whether to re-impose nuclear-related sanctions, in effect breaking the U.S. part of the agreement.

Secretary of State Rex Tillerson conceded this weekend that Tehran is in “technical compliance,” but he accused it of fostering instability across the Middle East that he said violated a preamble of the accord.

“Trump’s ignorant hate speech belongs in medieval times – not the 21st Century UN – unworthy of a reply. Fake empathy for Iranians fools no one,” he wrote.

Any U.S. president’s first U.N. speech would merit global attention. Trump’s garnered unusual interest because of his unpredictable policies and because he fired barb after barb at the U.N. during his campaign, calling it wasteful, useless and ineffective.

That criticism seemed distant history Tuesday afternoon when Trump offered a generous toast to what he called the “great, great potential of the United Nations” at a luncheon Guterres hosted for 200 presidents, prime ministers, monarchs and diplomats in a ballroom at the U.N.

“The potential of the United Nations is unlimited,” Trump said. “I’ve met your representatives, and I know you well. You are going to do things that will be epic, and I certainly hope you will. But I feel very, very confident.”

(Wilkinson reported from the United Nations and Bierman from Washington.)