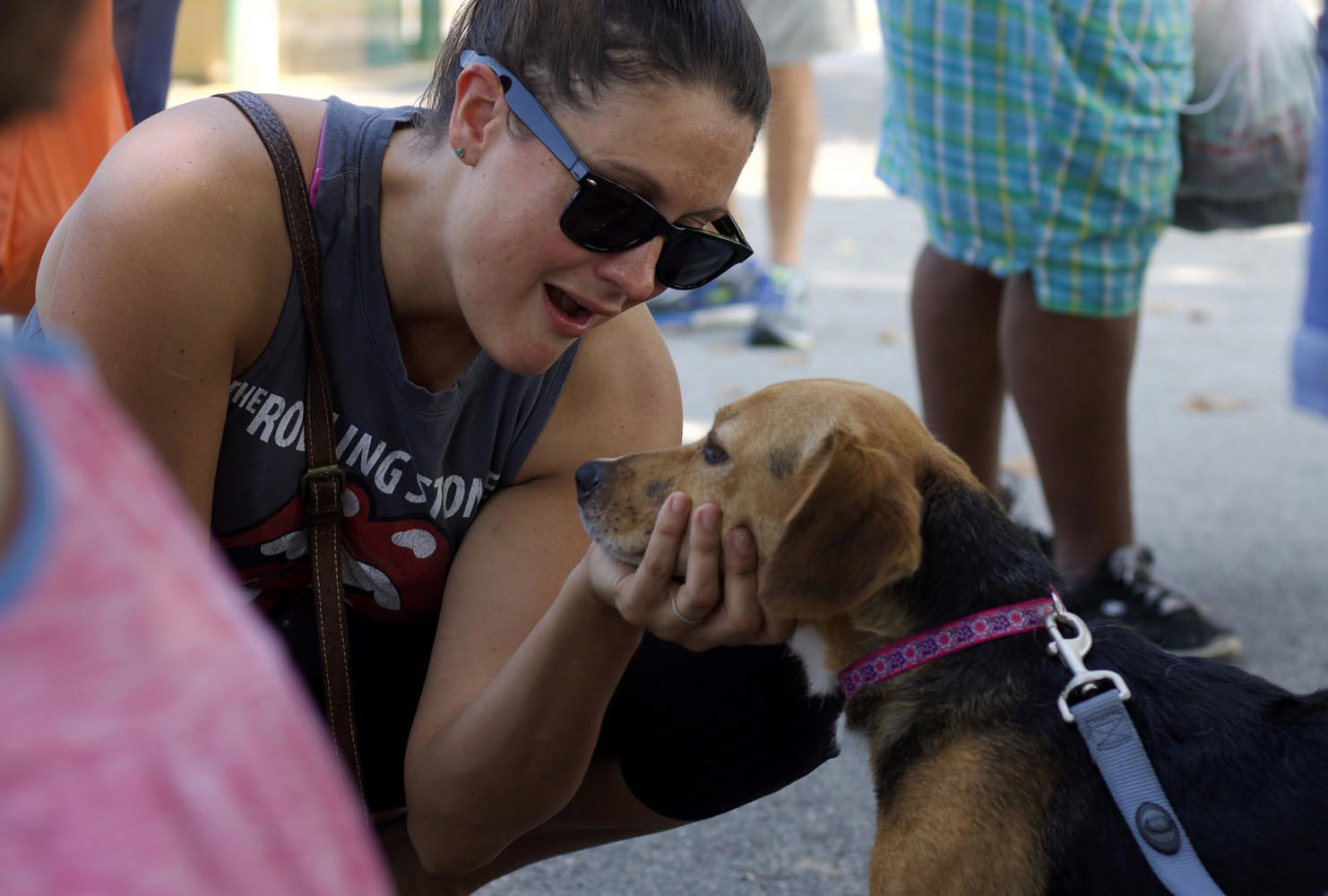 Assistant director of conference and scheduling services Sarah VanVooren of Carbondale, holds Jaz’s face, a 3-year- old rescue from Wright-Way Rescue, Saturday, Sept. 16, 2017, at the farmer’s market at Murdale Shopping Center. “We have a dog at home that we adopted, and so we like checking out the puppies just in case we ever find one,” said VanVooren. (Mary Newman | @MaryNewmanDE)

In the clamor to escape the hurricanes that recently battered the United States and Caribbean Islands, four-legged storm victims were often left behind.

Some southern Illinois shelters have kept these forgotten pets in mind and taken it upon themselves to rescue the animals left stranded by Hurricanes Harvey and Irma.

King said by taking in animals from Houston, the local shelter was able to take in more animals displaced by the hurricane flooding.

St. Francis, along with Midwest Animal Rescue, transported 55 dogs and cats from Houston, with St. Francis taking in 37 of them, King said.

“We actually just kind of make room for these animals,” King said. “We just set up more temporary kennels for them, and just kind of worked around the fact that we were already full.”

She said they haven’t had any issues getting the dogs adopted.

“We’ve already adopted eight dogs that came back with us from Houston,” King said.

She said animals easily get overlooked during natural disasters.

“Obviously the people are very important, but the animals are important as well since they can’t help themselves,” King said. “We just wanted to show support from the southern Illinois community.”

She said shelter workers asked the community for donations to take to the shelters in Texas and they were very proud of the response. They were able to take dog food, cleaning supplies and money, King said.

Wright-Way Rescue Shelter in Murphysboro also utilized outside help to make their efforts a success.

Christy Anderson, the shelter’s executive director and founder, said Watermark Ford of Marion donated a vehicle and gas to transport over fifty dogs they rescued from Texas.

“We’ve been able to do all of these things extremely efficiently, which is important so we can use each donated dollar to the fullest extent,” Anderson said.

Wright-Way is the largest rescue shelter in southern Illinois, with over 80 transfer partners throughout the Midwest. They save about 5,000 dogs and cats every year, Anderson said.

Anderson said prior to their trip to Texas to rescue animals, the shelter started soliciting foster homes outside of their normal base, and as a result it was able to welcome 50 new foster homes to its network.

“Housing them became possible through those efforts,” Anderson said. “Otherwise it probably would’ve become a problem.”

Every rescue needs to go through a two week quarantine to make sure any medical issues it could’ve been exposed to prior to being taken in have been addressed by veterinarians, Anderson said.

The animals that were rescued will become eligible for adoption this week, and Anderson said they don’t anticipate have any issues placing them into homes.

Wright-Way Rescue is currently on trip number four to rescue animals affected by Harvey, and Anderson said they also have plans to rescue dogs in Florida who were displaced by Hurricane Irma.

Anderson and King said the best way to help is through volunteering, adopting and donating to the shelters.