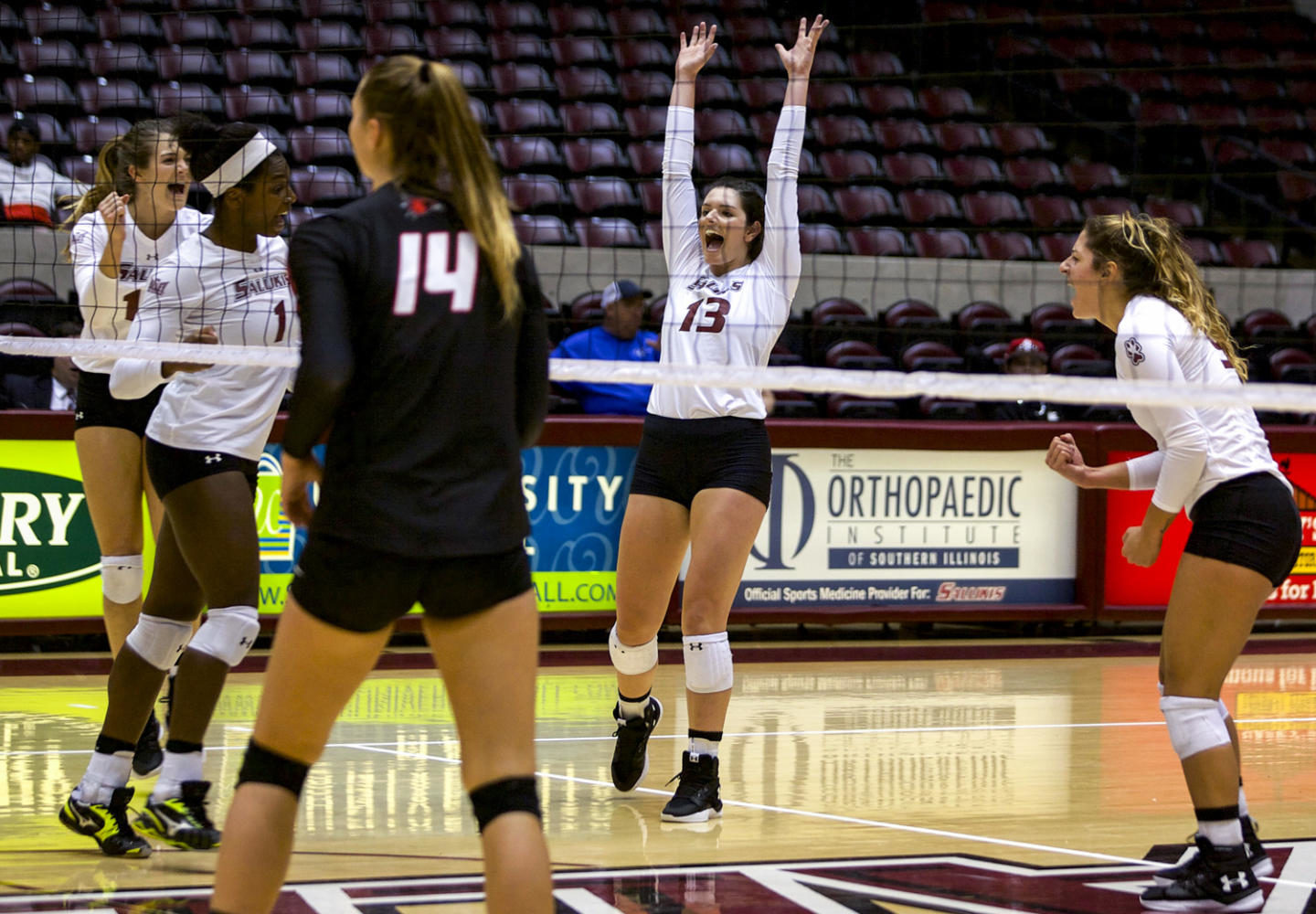 Freshman setter Rachel Maguire, 13, celebrates with her teammates, Tuesday, Sept. 12, 2017, during the Saluki's home game at SIU Arena. The Salukis beat the Redhawks in the fifth set, 15-13. (Mary Newman | @MaryNewmanDE)

The Salukis came into Tuesday’s matchup looking to take their first win of the season against long-time rival SEMO. SIU has won seven out of the last eight matches against the Redhawks, sweeping them in three straight sets in their two previous contests.

The first set of the match was a battle for both teams.

SIU hit the ground running with a quick four-point run for an early 5-1 lead. They led the majority of the first set, but SEMO battled back late on two different three-point runs to tie the match.

The Redhawks carried their momentum over into the second set, scoring three unanswered points to take an early 3-0 lead.

SIU stifled the early run by SEMO, scoring five of the next six points in the set to take the lead away from the Redhawks 5-4.

Both teams continued to battle back and forth throughout the set, with neither team letting the other take more than a two-point advantage.

At 15-15 in the second set, the Salukis caught fire as senior outside hitter Abby Barrow took control of the game. Her three kills and two aces helped SIU close out the second set with a 25-21 win, tying the match 1-1.

The third set proved a back-and-forth affair early, with neither team letting the other take a significant lead.

SEMO found its footing and pulled away from SIU midway through the match, riding a three-point run to take an 18-13 lead. The Salukis were once again forced to utilize timeouts to slow the Redhawks down.

Coming out of the timeouts, the Salukis managed to string together a couple of two-point runs to close the gap 23-21.

Despite SIU’s efforts to come back late, SEMO closed out the set 25-21 on the back of a two-point run punctuated by an ace to go up 2-1 in the match.

Southeast Missouri looked to put Southern away early, taking a 3-0 lead to begin the fourth set.

The Salukis stifled the Redhawks charge out of the gate, keeping the set close early on before bursting ahead with a five-point run followed by a four-point run to take control of the set at 15-6.

SIU never looked back, with Barrow leading the charge with six kills to take the fourth set 25-17, tying the match at 2-2.

In a race to 15 points in the decisive fifth set, SEMO jumped out to an early 4-0 lead.

The Salukis once again held strong against an early Redhawks lead, fighting back and tying the game at 8-8.

The two teams flip-flopped back and forth to a 13-13 tie before Southern claimed the final two points of the fifth set to take a 15-13 win and a 3-2 match victory — its first win of the young season.

“It’s nice to get that win,” head coach Kari Thompson said. “Now they can see that what they have been working on pays off.”

Barrow led the team in kills with a season-high 16 on the night, and set a career-high in service aces with a total of four.

Freshman opposite hitter Maggie Nedoma added 13 kills of her own to the team’s match total of 70.

Meeks led the team in blocks, tying her career-high of nine while claiming 10 kills.

Sophomore setter Alayna Martin led both teams in assists with a total of 32.

Senior libero Ashley Edelen led both teams in digs with 22 on the night.

Senior outside hitter Nellie Fredriksson put up a total of 10 kills and four blocks in the match.

SIU (1-7) travels to South Bend, Indiana to compete in the Notre Dame Shamrock Invitational. Its first match will begin at 4:30 p.m. Friday in Purcell Pavilion against Central Michigan University (7-2). The Salukis play their final two games of the tournament Saturday against Notre Dame (7-1) at 12:30 p.m. and Michigan State University (5-1) at 4:30 p.m.