Florida-native SIU student deals with Irma from 14 hours away 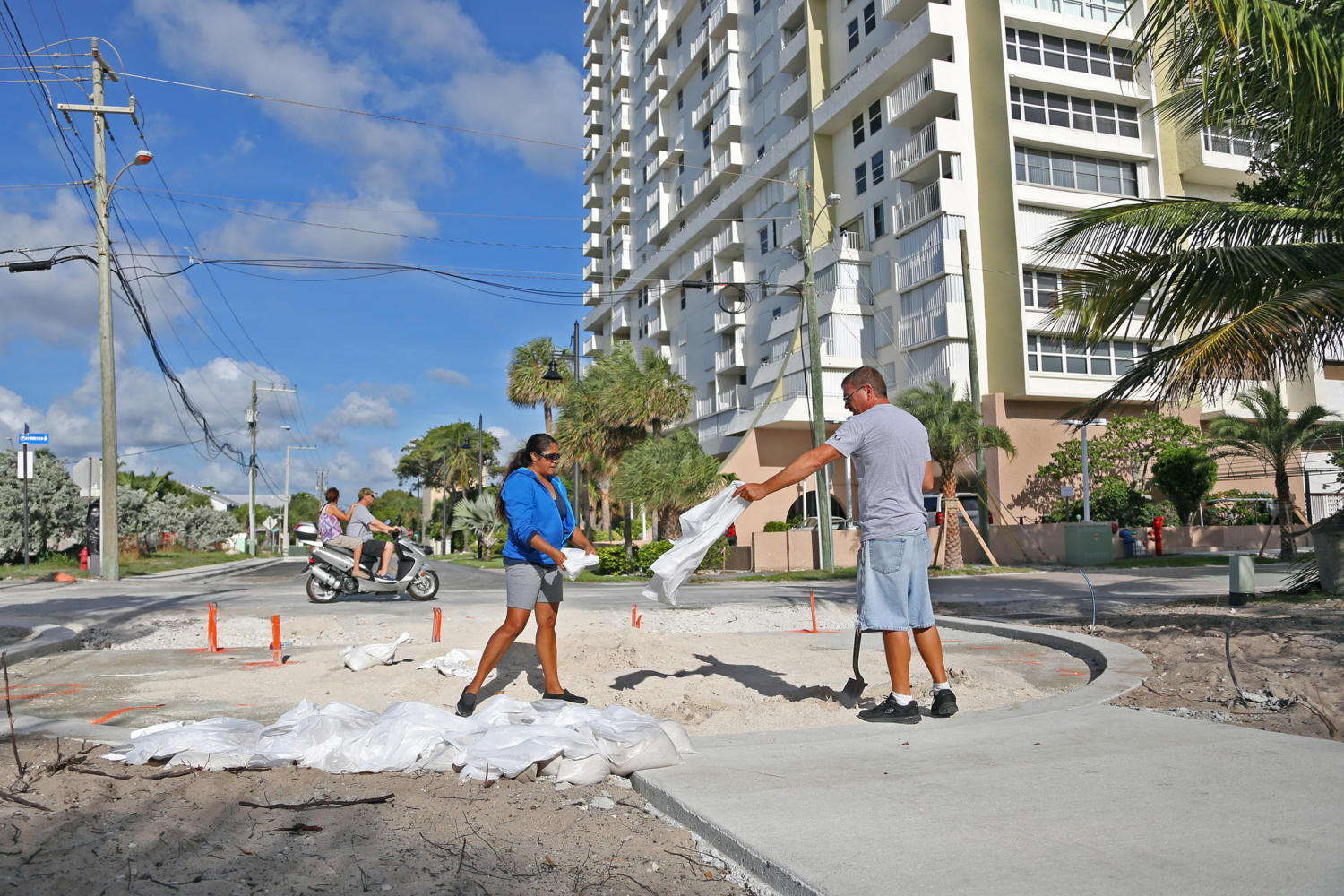 Liz Hankins and James Kiernan, of North Lauderdale, fill trash bags with sand on Pompano Beach in preparation for Hurricane Irma on Friday, Sept. 8, 2017. (Amy Beth Bennett /Sun Sentinel/TNS) SOUTH FLORIDA OUT; NO MAGS; NO SALES; NO INTERNET; NO TV

John Lawless, a junior studying physiology from Lake Mary, Florida, waited all of last week to see if Hurricane Irma would aim its fury at any of his family members or beloved childhood stomping grounds when it touched down over the weekend.

“I’ve lived through a few hurricanes but it was daunting, just the sheer size of Irma,” said Lawless, who grew up about 20 minutes north of Orlando. “It’s hard … being 14 hours away from everybody. If something bad did happen, I would be so far away and that’s scary.”

Lawless said his parents, two younger sisters, cousins, grandparents and eight aunts and uncles all made it through unscathed.

Irma, which has now been downgraded to a tropical storm, was expected to pass directly through Tampa Bay, but made an unexpected northeast turn Sunday night. It crossed the Orlando area around 2 a.m. on Monday.

Regardless of where Irma passed through Florida, Lawless said his family could’ve been at risk.

“I have family pretty much scattered all over the state,” he said. “I was up late, I talked to them before I went to bed and everyone seemed to be good. My family’s house is still without power.”

Though Orlando, which is about 35 miles inland, wasn’t at risk for a storm surge, wind gusts are reported to be in the 80 to 100 mph range by the Orlando International Airport and the National Hurricane Center.

Lawless said at this point, his family members on the coasts have all moved inland and everyone has congregated in the center of the state.

“Usually by the time it gets to us in central Florida it’s slowed down,” Lawless said. “But you never know what to expect. It’s always just expect the worst and hope for the best.”

Some of his relatives live on the beach in St. Petersburg, which, like Tampa, was spared a direct hit. But Lawless said they still haven’t been able to get home to assess their property damage.

Now that his family is safe, Lawless said his childhood beaches are some of his biggest concerns, and he’s still not sure how much damage has been sustained.

“These are places I have memories possibly being destroyed or damaged,” Lawless said. “The beaches I grew up at were definitely expected to get some more catastrophic damage than the inland places.”

The storm left at least six dead and millions without power in Florida, according to local officials.

“In the next day, there’s no way to predict if my family will run out of power,” Lawless said. “If the power doesn’t come back on, if the generator goes down, I might lose contact with my family for a couple days until they can get somewhere to charge up.”

In the days leading up to Irma’s landing, Lawless said the state was a “madhouse.”

“My dad waited in line for two hours to get propane on Thursday, and and my mom waited in line at the grocery store for a couple hours to get three cases of water,” Lawless said. “The line was wrapped around the entire store and they still ran out.”

Gas stations didn’t have enough gas for everyone trying to flee the state and hardware stores ran out of plywood for people staying and boarding up their windows, he said, adding that generators, food and water were also scarce.

“You need to be ready to be hunkered down in your house for possibly a week or two with no electricity,” Lawless said. “You never know if the power is going down in your street and when they’ll get to it, so it’s just madness.”

Though Lawless said no one ever wants to deal with severe weather and the destruction is causes, he added that some of his best memories growing up happened during hurricane seasons.

“Part of me wishes I could be there,” he said. “Since there’s no power, it’s a lot of board games and everyone is together. We always try to make the best of the situation and have a good time. People who are raised in Florida have a different outlook on hurricanes than people who are looking from outside.”

Lawless said he won’t be able to make it home until winter break, and his family’s house didn’t suffer significant damage from the storm.

Still, he said he knows the community will come together to clean up in Irma’s wake.

“I know there’s a lot of damage and people who aren’t as fortunate as my family may not have their homes,” Lawless said. “It’s all about pulling together and helping each other. That’s all anyone can do right now, is just lend a hand to your neighbor.”