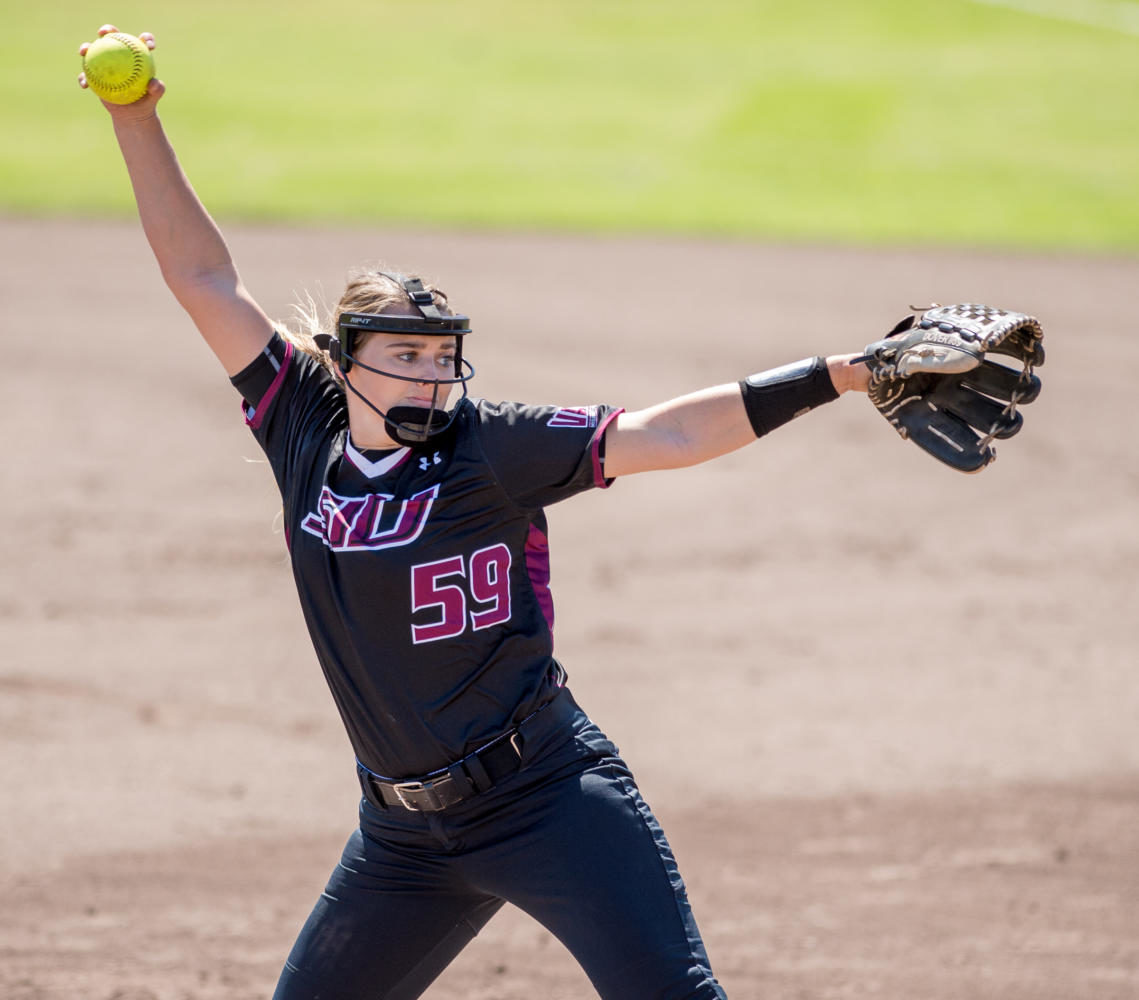 SIU softball opened up its fall season on Sunday with a doubleheader at Charlotte West Stadium against visiting teams from Rend Lake and John A. Logan Colleges, taking the first game 8-0 over Rend Lake before claiming another shutout win 9-0 over John A. Logan in game two.

The Salukis came out strong in their first game against the Rend Lake College Warriors. Junior starting pitcher Savanna Dover allowed a leadoff single to Rend Lake outfielder Nicole Johnson before striking out the next two batters looking. She inducing an inning-ending fly out from the Warriors’ clean-up hitter to strand the runner.

Saluki offense wasted no time on Sunday, putting up three runs in the first inning.

Sophomore right fielder Susan Baranski led off the inning with a single, and junior left fielder Eyrika Brandenburg followed with a walk to give SIU runners on first and second with no outs.

Sophomore second baseman Maddy Vermejan bumped both runners over with a sac bunt, allowing sophomore catcher Kyleigh Massa to drive both runners home with an RBI double. Southern tacked on one more run before the bottom half of the first inning came to an end, taking an early 3-0 lead over Rend Lake.

SIU’s Dover shut down Rend Lake in the top of the second inning, striking out the side to keep the Warriors off the board.

The Salukis were able to carry their offensive momentum into the bottom half of the second, as senior shortstop Savannah Fisher worked a leadoff walk and advanced to second on a single by Baranski. Brandenburg knocked in Fisher with an RBI single, putting runners at the corners for Vermejan while extending Southern’s lead to 4-0 over Rend Lake.

Vermejan connected for an RBI triple to score both runners and put the Salukis up 6-0. SIU added another run on an RBI single by Massa, her second hit and third RBI of the game, to give Southern a 7-0 lead through two innings.

The Warriors managed to get a two-out hit in their half of the third, but the runner was promptly thrown out trying to steal second.

The Salukis also went down quietly in the third inning, with two groundouts and a line out.

Rend Lake began the fourth inning with a leadoff single by infielder Keely Barnes, but Dover struck out the next three batters she faced, bringing her total strikeouts to 8 through four innings while protecting SIU’s 7-0 lead.

Southern scored one run in the bottom of the fourth inning, as junior Brittany Turner was called on to pinch hit for Brandenburg and led off with a single. She then caught the defense sleeping as she took second with some great heads-up baserunning.

Turner advanced to third on a wild pitch and scored on freshman second baseman Meredith Wernig’s sacrifice fly to shallow left field for an 8-0 Saluki lead.

With SIU up eight runs entering the top of the fifth inning, Rend Lake was in jeopardy of losing by NCAA’s mercy rule — wherein a game is called if one team is ahead by eight runs or more after five innings.

Dover allowed a leadoff walk to Rend Lake’s Chelsea Hill to start the fifth inning, but bounced back with two straight strikeouts. The Warriors’ Johnson came to the plate with two outs and hit a single to right field. Hill tried to go first-to-third on the hit, but Saluki right fielder Baranski made a brilliant throw to cut down Hill on the play, ending the game in an 8-0 win for SIU after five innings due to the mercy rule.

Saluki hitters scored eight runs off of 11 hits and three walks while only striking out twice. SIU’s Massa went 3-for-3 with three RBIs in the game.

Dover completed the mercy-rule shortened game with an impressive 10 strikeouts through five innings while only allowing one walk and five hits. She was aided by a rock-solid defense behind her that committed no errors in the game.

The Salukis kept the intensity high in game two against the John A. Logan College Volunteers. After a blank first inning for JALC, Southern built a commanding lead with its first turn at the plate.

Brandenburg led off the bottom of the first inning for SIU, working a walk and moving over to second on a single by freshman center fielder Maris Boelens. Southern proceeded to pull off a double steal to put both runners into scoring position.

Vermejan came to the plate and delivered a deep RBI single to center field that was mishandled by the Volunteers’ outfielder, allowing Vermejan to advance to third while both Brandenburg and Boelens scored to put the Salukis up 2-0.

SIU was aided by more lackluster defense when senior third baseman Sydney Jones reached on an error. She was able steal second before advancing to third on a passed ball that allowed Vermejan to score the third run of the inning.

Freshman shortstop Jenny Jansen reached base via walk and advanced into scoring position as Sydney Jones scored on a wild pitch. Freshman right fielder Megan Brown delivered an RBI single to score Jansen and give SIU a 5-0 lead.

While John A. Logan College was throwing the ball around trying to get an out, Brown snuck in for another run. In total the Salukis put up six runs in the first inning on five hits and three errors, claiming a commanding 6-0 lead.

The Volunteers were able to put a runner in scoring position in the top half of the second inning when leadoff hitter Rebecca Moffett reached base after being hit by a pitch, and advanced to second on a one-out single. Saluki junior starting pitcher Brianna Jones bounced back by striking out the next two batters, stranding both runners while protecting Southern’s six-run lead.

The Salukis scored once again in their half of the second inning. Vermejan was hit by a pitch to lead off the inning, and advanced to second on a Massa’s fielder’s choice ground out. Sydney Jones followed with a single to load the bases.

Jansen put the ball in play during her at-bat, forcing a play at the plate that Vermejan was able to beat out to score a run. The Salukis were unable to score again in the inning due to solid defense by the Volunteers, keeping the score 7-0 in favor of Southern through two innings.

JALC would go quietly in the top of the third inning as they went three-up-three-down on two groundouts and a strikeout.

The Salukis managed to load the bases on two singles and a hit-by-pitch in the bottom half of the third inning, but were unable to capitalize. The inning ended with Vermejan getting thrown out at home.

John A. Logan would again go three-up-three-down in the top of the fourth on two strikeouts and a groundout.

Southern started the bottom of the fourth with Jansen reaching on an error. Wernig entered the game to pinch run for Jansen and utilized her speed to advance to third on an error by the Volunteer’s third baseman — JALC’s second error of the inning and fifth of the game.

Freshman catcher Shelby Hodo reached on a single and scored along with Wernig on Boelens’ RBI single to put Southern in front 9-0 through four innings and threaten JALC with a mercy-rule loss heading into the fifth inning.

The Volunteers opened up the fifth inning with a lead-off single, their first baserunner since the second inning. Brianna Jones forced the next batter to fly out to shortstop, then struck out the next batter looking for two quick outs. The game ended on a groundout to third base, securing back-to-back shutout wins for SIU.

SIU capped off a great day of softball with nine runs on 10 hits and two walks in game two. Four Salukis finished the game with multiple hits, including Vermejan who went 2-for-2 with two runs scored and two RBIs.

Notes & Quotes of the Day

“I thought we were great,” head coach Kerri Blaylock said. “I’m really, really pleased with our pitching and offense. I thought we played complete ball games.”

The Salukis were nothing short of dominant today, scoring 17 runs on 21 hits throughout the day. The pitching tandem of Dover and Brianna Jones only allowed seven hits and one walk in both games combined.

“I feel like I went out there today with the mindset to compete,” Dover said. “I just let my defense work behind me.”

The Salukis, who made an appearance in the 2017 NCAA Tournament last season, know the importance of a good defense.

SIU (2-0) takes on Saint Louis University and Murray State University next Sunday at Charlotte West Stadium as part of another midday double header. Game one against Saint Louis is scheduled for 12 p.m., with game two against Murray State to begin after completion of game one.

Sports reporter Jacob Selsor can be reached at [email protected] or on Twitter at @jacobselsor_DE.