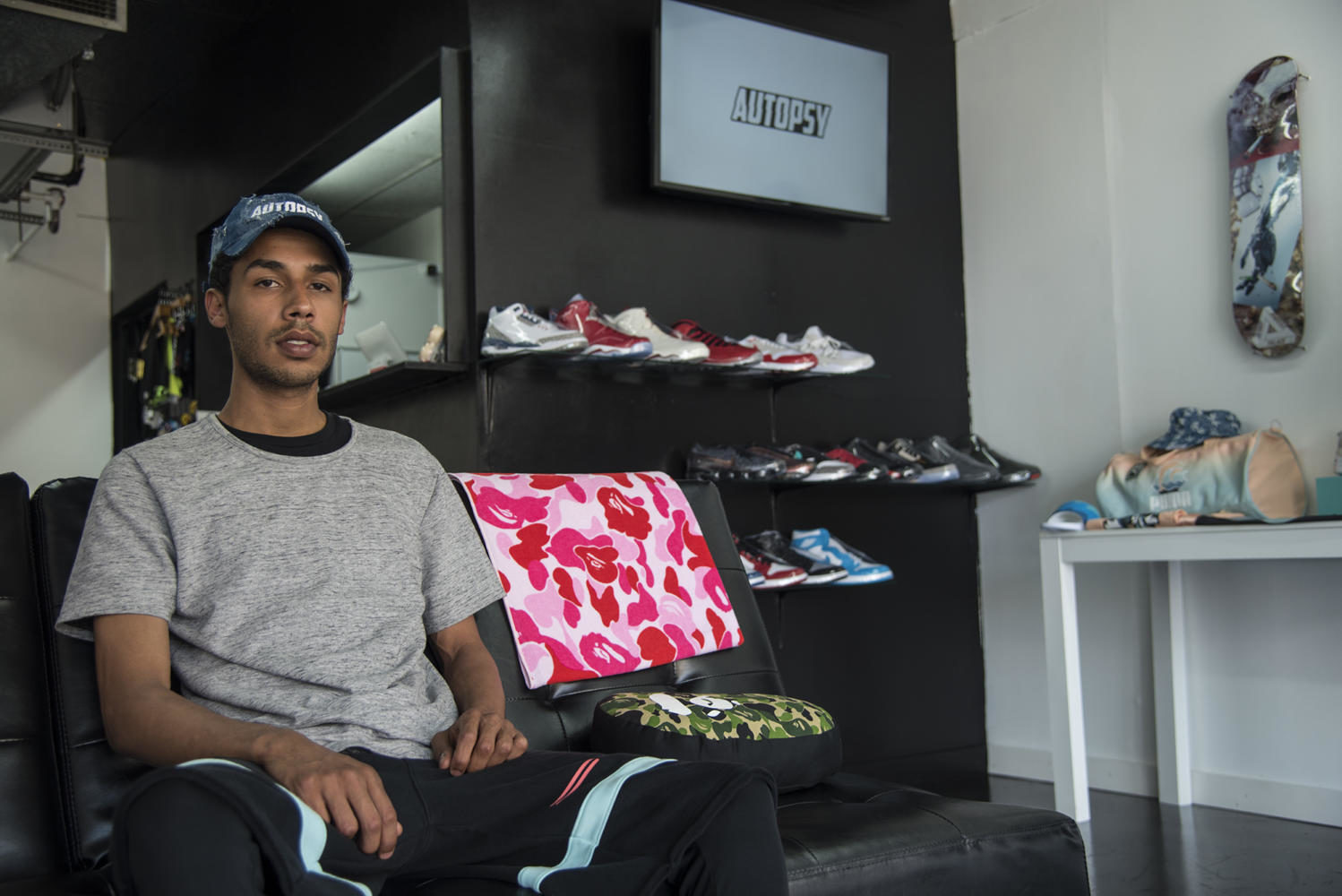 Miles Davis, a senior from Durham studying theater, poses for a portrait Monday, Sept. 4, 2017, at his boutique Autopsy on West Walnut St. “Be original and make sure nobody tells you you can’t do something,” Davis said. “That’s what happened to me in high school, people pushed past my ideas and my dreams. Now I am bringing it into reality, so it’s deifnitely possible to do whatever you want to.” (Athena Chrysanthou | @Chrysant1Athena)

Ivy Park, Yeezy, Bape, Supreme, Kylie Cosmetics, Kendall + Kylie, Pink Dolphin, and Goon are just a few brands that can likely only be found in one store in Carbondale.

Born in Carbondale, Davis and his family moved to Iowa City when he was two years old. He came back to Carbondale for college, but left again in 2014 to work in a music publishing company and with music artists in New York and Los Angeles, respectively.

When he came back to Carbondale again in 2016, Davis said he was inspired to open his store after living in the back of a high-end fashion store in Los Angeles, and because of the array of fashion options available in the two large cities.

“I wanted to basically start something here because I went to school here, and I knew there was nothing really cool or exclusive that kids can go around to shop or be in a cool environment,” Davis said.

Randle Hite, a sophomore from Chicago studying business agreed that Carbondale was lacking a place for high-end shoppers.

“I’m from Chicago, so I’m into the urban fashion,” Hite said. “Once I went in, seeing all of the stuff I was used to in a big city, it was most definitely a top pick, because Carbondale really doesn’t have anything of that nature.”

Davis said the basis of his store is exclusivity, and you won’t find two of the same item on the racks.

“I really like to give the people in the community here a chance to get these products, because everything we have here is sold out elsewhere,” Davis said. “That’s what we go for, exclusive things, and not everybody having the same thing on.”

He said although a select number of items are available online at www.autopsy.shop, most of it is only available in the store.

Davis said people responded really well to the store when it first opened.

“A lot of people were amazed and kind of thought it was a myth or something, because no one would’ve ever thought this would just land in Carbondale,” he said.

He said he doesn’t go anywhere else for these items anymore because having Autopsy in town is more convenient.

“If I want something, I want to be able to try it on and make sure it fits,” Hite said. “I want it there. I want it now. The commute for anywhere else for anything like this is far.”

Now that students are back in Carbondale, Davis said business has been much better.

“Business has picked up [like] crazy,” he said. “Ever since the solar eclipse the store has been doing really good.”

Davis said owning his store has been pretty hectic so far, especially as a student trying to balance managing his business with classwork. But he said being a student helps him relate to other students around the community.

But to maintain his sophisticated selection, he also has to travel to different weekly product releases.

“To be able to have these products, you have to be at the right place at the right time,” Davis said. “It’s definitely hard, but we get through it because it’s really cool when the customers come in and they really are happy that something is here.”

As an example, Davis said he had to go to Chicago over the weekend to camp out and buy a pair of rare Nike shoes for the store.

“We’re just working everyday to make it happen regardless of school,” Davis said. “School definitely comes first, but trying to get this business on its feet is definitely a priority for me also.”

Davis said he likes to give back to his customers by holding raffles. In a few weeks, he is raffling off a limited release pair of Yeezy shoes.

“I’m trying to give people the opportunity to get these products,” Davis said. “I feel like the raffle is a fair chance for everybody.”

Davis said the store’s Instagram page @autopsy.me is the best place to go to browse all of its  current merchandise and to learn about sales and raffles. The store is open every day from 12 p.m. to 8 p.m.