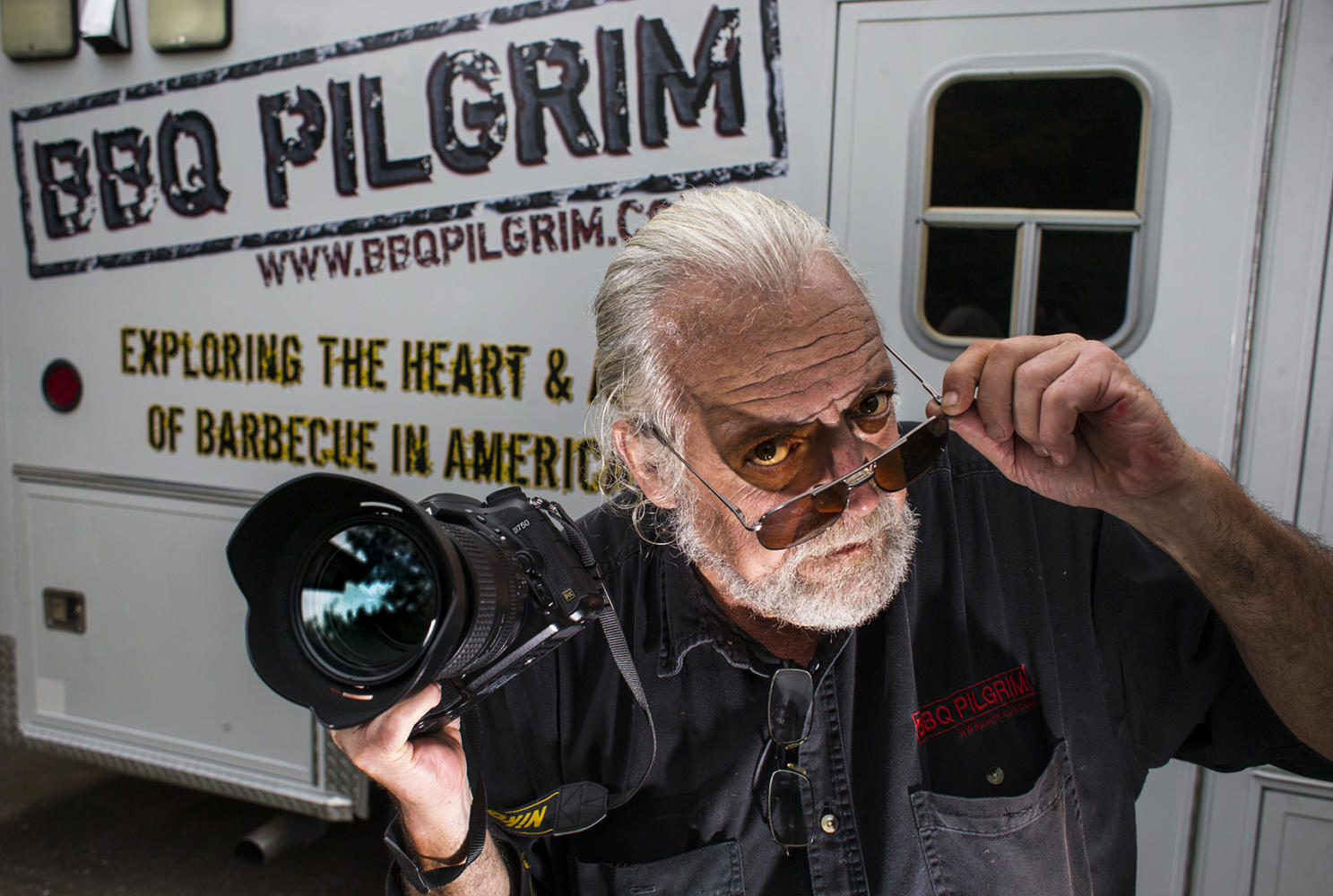 Mark Dolan has worn many hats during his lifetime: radar operator for the U.S. Navy, watermelon picker, truck driver, bartender, asphalt layer, and, for the last nine years, a photojournalism professor at SIU.

He embarked Tuesday on a yearlong journey in another one of his familiar roles — captain of the BBQ Pilgrim, a military ambulance he repurposed into a vehicle he drives cross-country to “to explore and celebrate the diversity with which we approach barbecue in America.”

Dolan’s first odyssey on the BBQ Pilgrim was in between two teaching gigs, from 2006 to 2008.

“I had to come up with a name,” Dolan said. “When I came upon ‘pilgrim’, it just felt right. The pilgrims were out there searching and traveling and that’s what I was doing.”

The 62-year-old said he initially became interested in barbecue at age 50 when he came across statistics that showed a rise in sales of grills and smokers. Upon further research, he said he discovered the craft and its practitioners weren’t getting the attention they deserved.

“Barbecue didn’t have a lot of people documenting it like the way I wanted to,” Dolan said. “This is just story-telling.”

Some of the many stories Dolan has told during his barbecue expeditions are those of a biker who started selling barbecue out of a drum at biker rallies — and turned it into a multimillion dollar operation — to a family that sold the first barbecue in North Carolina and a man in Vermont whose pet pig roams his barbecue pit.

Dolan has written many of these prior experiences into a book, and he said he wants to use the trip he’s on now to fill the last chapters. He plans to fill it with his own recipes, which he said he will create and photograph himself.

Though he is known for his love of barbecue, Dolan said his true passion is teaching. He has been a mentor to budding journalists for nearly two decades — but he wasn’t always fond of academia.

Born and raised in Long Island, Dolan dropped out of high school at 17 to join the Navy. From 1973 to 1975, he served as a radar operator on the USS Dyess.

It was in the Navy that Dolan said he started thinking about going back to school. He said one of his friends in the Navy took him under his wing and pushed Dolan to continue his education.

Dolan followed that advice and graduated from St. John’s Community College in Palatka, Florida with honors in 1979.

His next stop was Arizona.

“I don’t know, I just had it in my head that I wanted to go to Arizona,” Dolan said.

Upon arriving in Phoenix, Dolan got a job in airline catering. After two years, the airline business faced difficulties due to an air traffic controllers strike.

Dolan, who had just made supervisor, said he could have found a way to avoid layoffs. Instead, he decided to take one for the team.

“I said, ‘Hey listen, I’m kind of restless, why don’t you just lay me off instead of one of the other people?” Dolan said.

The airline obliged, and from there, Dolan was able to collect unemployment, camp out in Arizona for a while and finally begin the next leg of his academic pursuits.

He went back to Florida and enrolled in the University of Florida to get his bachelor’s degree in journalism.

It was there, after a brief foray into print reporting, he said he got the photojournalism bug.

“You’re really capturing moments,” Dolan said. “Some people have this thought that it’s just snapping pictures — it is so much more than that. You’ve got to be a journalist, you can’t really make good images that have meaning unless you know what the story is.”

During that time as an undergraduate, Dolan worked as an intern at the Gainesville Sun. After he graduated in 1985 at age 30, he got a job as a staff photographer at the Sarasota Herald-Tribune — but his goal was always to get back to the Gainesville Sun.

Fortunately for Dolan, the Gainesville Sun was hiring. Dolan worked there until 1989 before a friend of his became an editor at the Anchorage Times in Alaska and called Dolan up.

Dolan took up the role of director of photography at the now-defunct Anchorage Times, running the publication’s photo department and finding ways to make it run more smoothly and efficiently.

After nearly two and a half years there, the McClatchy Company bought the Times and forced them out of business.

Though he was out of a job, Dolan said he made the most of it.

“I got to spend the summer in Alaska — I was fishing, I was catching salmon like they were nothing.” Dolan said.

After the summer, and with cases of canned salmon, Dolan got on the road back to Florida.

However, the route he took was a bit unconventional.

“I went from Alaska down to Seattle, to the east coast and New York, then I went back to the west coast and then I went east again to Florida,” Dolan said. “It was an 11-week road trip.”

As he crossed the country, Dolan was visiting colleges and universities.

“I had it in my head about getting a masters degree,” Dolan said.

He was also getting offers to be a teacher’s assistant, he said. Ultimately, Dolan made his return to New York and attended and graduated from Syracuse University in 1994 with a master’s degree in visual and interactive communications.

After receiving his masters, Dolan became the senior picture editor for the Providence Journal in Rhode Island.

A little over two years later, Dolan received a call that led him back to the classroom. Syracuse University wanted him to teach.

“I … had what I like to call my first midlife crisis,” Dolan said. “I decided it was time for a change. So I quit my job and sold my house.”

He traveled the country telling the story of American barbecue until 2008, when he landed a teaching position at SIU.

During his time at the university, Dolan said he’s earned a reputation.

“Make no mistake, I’m known for being hard, for having high expectations,” Dolan said. “But I make it clear what they are and what I expect from people is to try.”

Dolan said it’s important to impress upon budding journalists the sacredness of deadlines.

Students in Dolan’s classes also receive critiques to their work during class time, which Dolan said is invaluable to improving a student’s photo skills.

“It doesn’t do anybody any good to have somebody say ‘Oh, I think that’s nice,’” Dolan said. “What the hell does that mean?”

A self-described workaholic, Dolan said his favorite part of his job is being able to help his students improve.

Dolan said, above all, he wants his life experiences to show students they don’t have to have their future figured out just yet.

“I tell this to parents all the time: I was a high school dropout and now I am a professor,” Dolan said. “I have parents who are worried about their kids and I say ‘they’ve got plenty of time to figure out what they want to do.’”