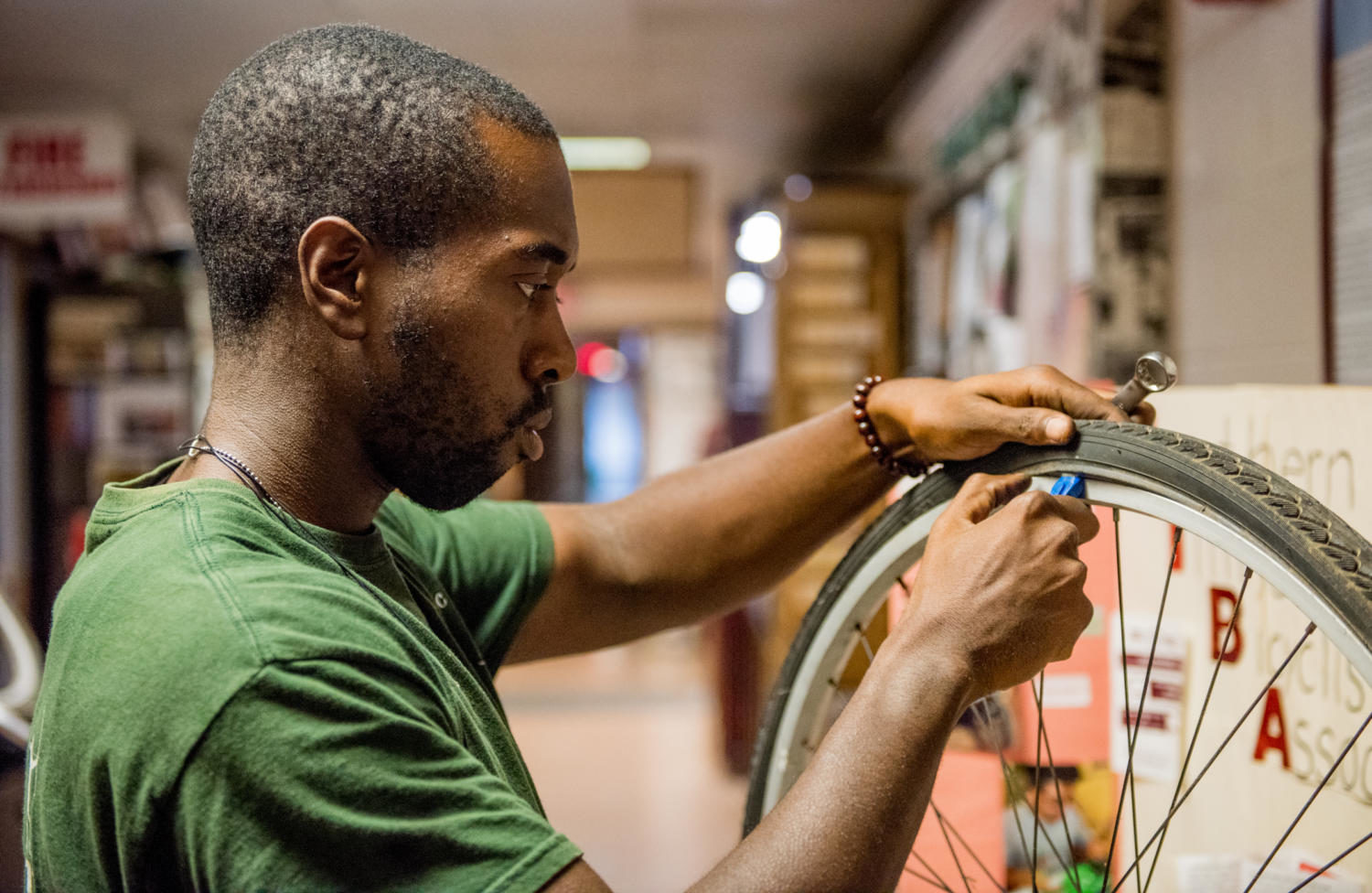 Darrien Moore, senior aviation major, of Blue Island, takes a wheel off of a student’s bike Monday, Aug. 28, at Saluki Spokes in the Student Center. Saluki Spokes provides free to use tools in order to get students bicycles back up and running. (Dylan Nelson | @DylanNelson99)

With the semester back in full swing and the hint that fall weather is on its way, some students are choosing to ride their bicycles to class rather than driving or hopping aboard the Saluki Express.

Those who do favor bike rides to car drives may want to familiarize themselves with the various services around campus — services which earned SIU the distinction of being a “Bicycle Friendly Campus” in 2016 by the League of American Bicyclists.

One of these programs is Saluki Spokes, a bike repair shop located in the basement of the Student Center in the Craft Shop.

Bicycle riders are no stranger to mechanical issues: flat inner tubes, broken chains and bent derailleurs are just a few examples of the problems riders may face. Saluki Spokes can handle it all.

“Basically, if there is any way a bike can be fixed, we’ll do it,” said bike mechanic Darrien Moore, a senior from Blue Island studying aviation.

The shop also allows students to rent out tools to fix their own bikes if they know how to do the repair, Moore said.

“Anything a student needs, we have it,” Moore said.

Saluki Spokes also advocates for following proper bike safety, because if the cyclist uses improper techniques or wrecks, they could find themselves back in the repair shop, Moore said.

Moore said there are a few basics he sees campus riders not following.

“Not every student wears a helmet,” Moore said. “Safety always has to be the primary concern. When you are on a bike, you have to think both for yourself and for the people around you.”

In the past, cyclists riding their bikes through crosswalks has also been an issue, as in October of 2016 when a bike rider was struck by a car in a crosswalk and issued a citation.

University policy states bikes and skateboards must be walked or carried through pedestrian crosswalks.

SIU also permits cyclists to ride on all campus pedestrian pathways except where prohibited by a sign or marking. In any case, pedestrians always have the right-of-way.

Aside from safety and repair services, SIU also has an outlet for cyclists to meet and ride together.

The SIU Cycling Club meets Wednesdays at 5:30 p.m. at the Bike Surgeon on 406 S Illinois Ave. The meetings include a ride of approximately 25 miles, according to the club’s president, Mitchell Gray.

Gray, a junior from Peoria studying horticulture, said the club is perfect for anyone looking to ride and be healthy.

“You’ll learn about the importance of physical health, as well as be able to learn about all the tactics and all there is to know about bicycling,” Gray said.

Gray said he has been racing at the semi-pro level for the past seven years.

“Most of the members don’t race, but I hope to have them race next year and possibly do collegiate nationals,” Gray said.

Though Gray is a semi-pro racer who, under optimal conditions, tries to ride about 400 miles a week, he said he stresses the club is not just for experts.

“We encourage kids who are just getting started with the sport by teaching them,” Gray said.