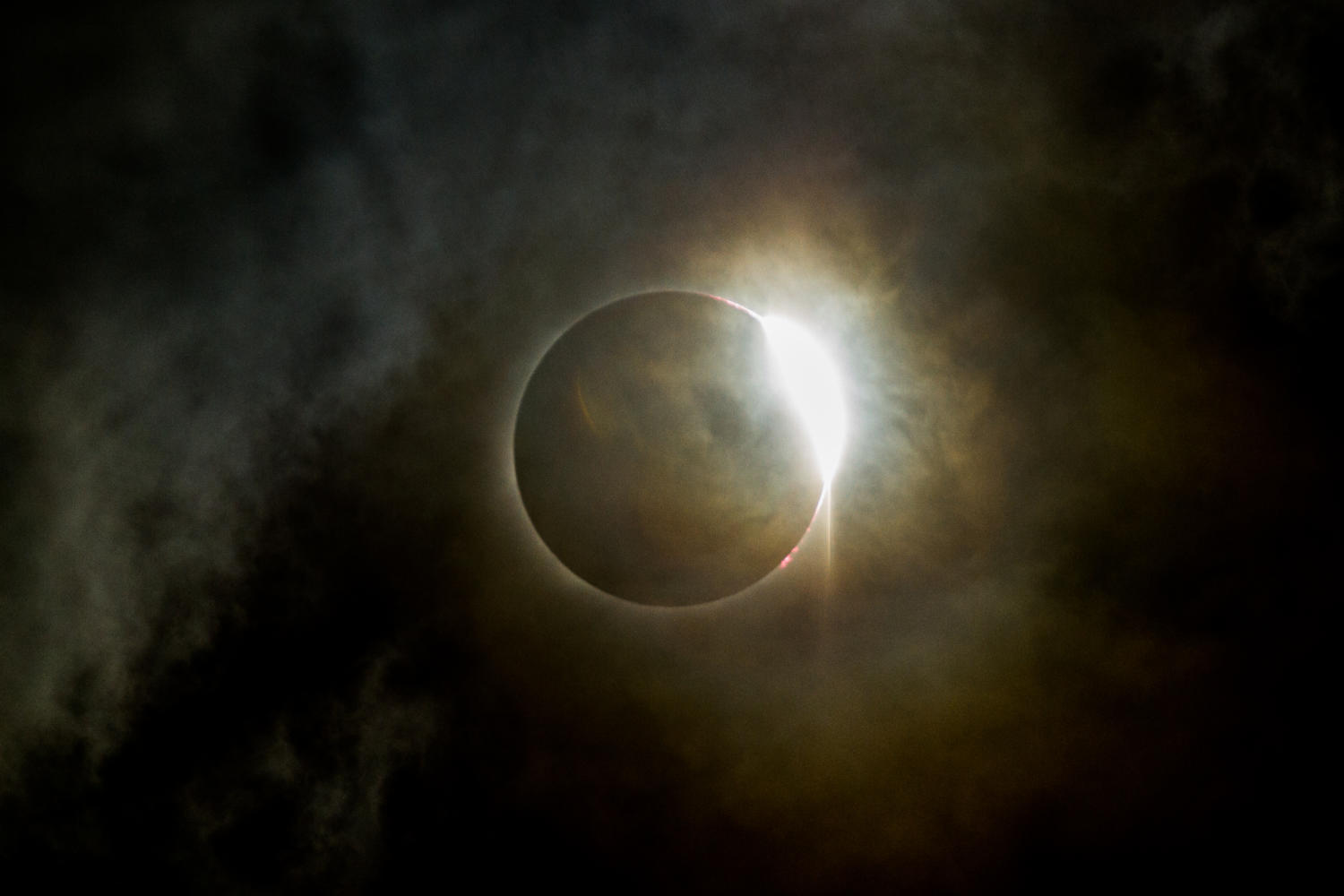 Physics masters student Christopher Mandrell said he didn’t get to see the moment when the moon first blocked the sun and a total solar eclipse began because he was too busy shielding a telescope from the sun with his back.

“I turned and my jaw just dropped, shocked,” He said. “[I’ve] seen hundreds of pictures of it training for this, so I knew exactly what it was going to look, like but it didn’t even come close.

As a cloud loomed over Saluki Stadium just moments before the eclipse began, Mandrell, a native of Marion, said that same cloud had just left an area known as the “dark site,” a field at University Farms where many researchers were set up with telescopes.

“From the second totality started till the end, all of our images that we took are crystal clear,” he said. “It was a spectacular data that we were able to collect.”

The team used an 80 mm refractory telescope with a solar lens attached, which was then removed during totality.

Mandrell was part of the Citizen Continental-America Telescopic Eclipse (CATE) Experiment, which recruited students from high schools and colleges, as well as other everyday citizens, in a nationwide project to capture images of the eclipse from its landfall in Oregon to its exit in South Carolina.

The project was composed of 68 groups across the continental United States, with four in or near southern Illinois: one at SIU, one at Bald Knob Cross, one at Giant City State Park and one at Southeast Missouri State University.

According to the experiment’s website, each station captured roughly 1,000 images, which are in the process of being compiled into a 90 minute video that spans the path of the eclipse. While that video has yet to be released in full, the National Solar Observatory, which organized the CATE Experiment, has released a brief 3-second video of 25 images of the eclipse.

Mandrell said the team sent the National Solar Observatory initial images within minutes of the end of totality and later sent their full data to the organization.

According to the National Solar Observatory, this test footage is only one percent of all of the data the organization expects to process. It is unknown when that full data will be released, but Mandrell said the organization is working to clean and refine the “junk” from the images and fixing the image alignment.

As a side project, Mandrell also placed an audio device in a spot away from the dark site, at the request of WSIU Radio reporter Kevin Boucher, to see if animals responded to the change in daylight. Boucher said during the few minutes of totality, animals and insects that usually come out at night began to make noise.

And after a year and a half of preparing, Mandrell’s part in the experiment is over.

“When I first came in, I didn’t really know anything about it,” he said. “I just thought, ‘It’s a neat thing to do.'”

Mandrell said that all began to change as the eclipse neared and he continued to prepare and meet with many other researchers who were all equally excited about the eclipse and eager to see it spark public interest in science.

Seven years from now, Mandrell said he wants to sit back and enjoy the 2024 solar eclipse as a visitor.

“I couldn’t really put into words my emotions, other than just a lot of hooting and hollering and high-fiving people,” he said. “How do you put that in words, that experience? I don’t know.”

Staff writer Cory Ray can be reached at cray@dailyegyptian.com or on Twitter @coryray_de.