Harvey aid, seen topping Katrina and Sandy, may be in batches 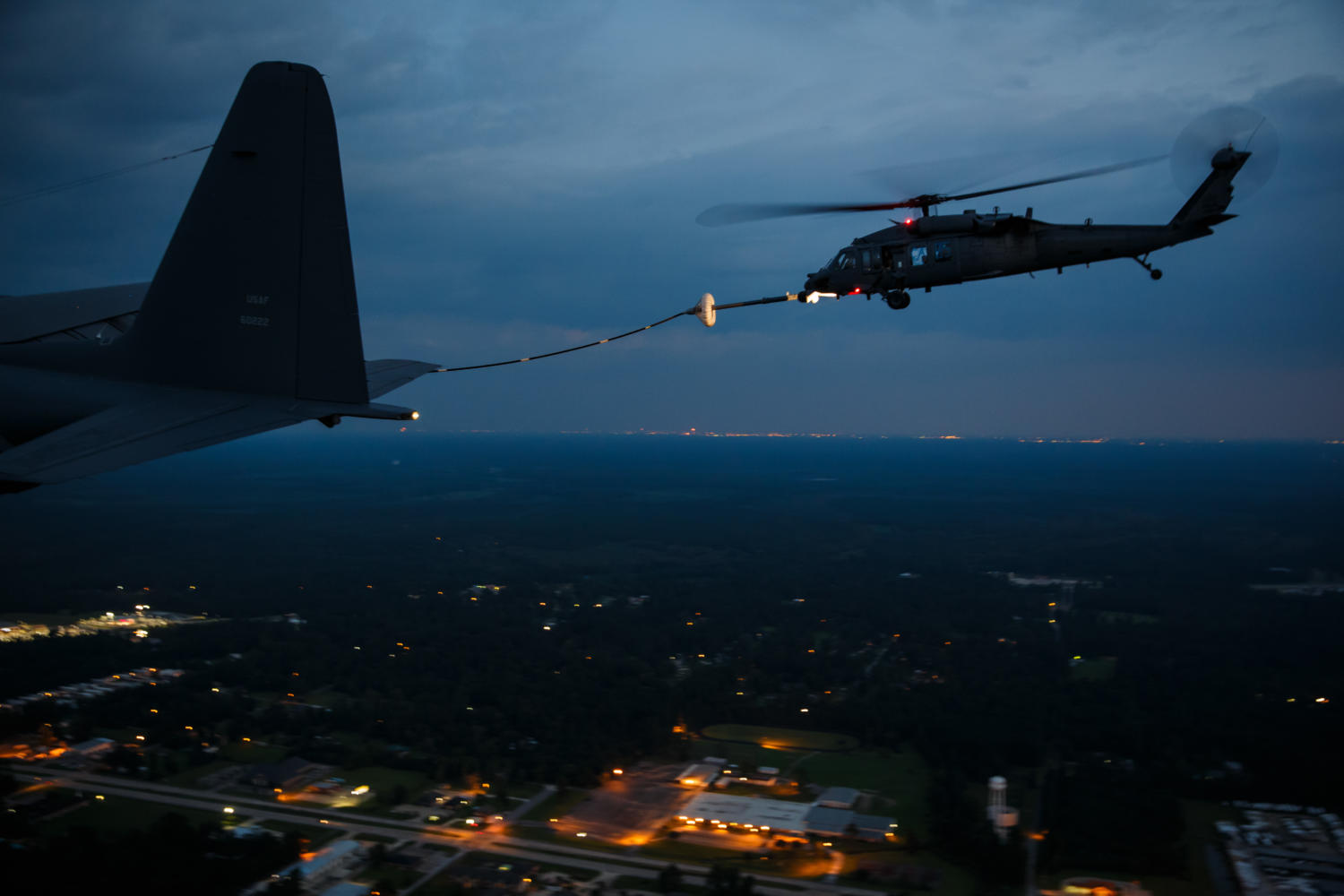 A military search and rescue helicopter is refueling mid-flight before resuming nighttime missions over areas flooded in the aftermath of Tropical Storm Harvey in Lumberton, Texas, on Thursday, Aug. 31, 2017. (Marcus Yam/Los Angeles Times/TNS)

The rebuilding of parts of Texas and potentially Louisiana after Hurricane Harvey may be the most expensive disaster relief effort ever, with early projections of federal aid soaring to $150 billion and raising the prospect of several congressional actions to pay for it.

Texas Gov. Greg Abbott, a Republican, said Wednesday he thinks federal aid in the wake of Hurricane Harvey should top what was provided after Hurricane Katrina hit New Orleans in 2005 and Superstorm Sandy struck the Northeast in 2012.

Congress approved about $120 billion in long-term relief after Katrina, according to the Congressional Research Service.

The uncertainty about the cost of rebuilding after Harvey becomes another unresolved issue for lawmakers returning to work Sept. 5 after an August recess. Congress also faces decisions about the debt limit and fiscal 2018 spending before the end of September.

Democratic Rep. Sheila Jackson Lee, whose Houston district has seen some of the worst flooding, has called for $150 billion in federal aid — more than Congress doled out after either Katrina or Sandy.

The size of the need may make it less likely that Congress will provide all the needed funds with a single spending measure. House Speaker Paul D. Ryan has already said Congress would need a continuing resolution to provide funding when the current spending law expires at the end of the fiscal year on Sept. 30.

Sen. Roy Blunt, R-Missouri, a senior appropriator, said the first batch of Harvey aid could be packaged with a continuing resolution; a debt limit increase needed by roughly Sept. 29; or other must-pass legislative items on the agenda. He said he prefers to fund the disaster relief in several batches as specific needs become clear, rather than in one giant spending bill at the outset.

“My view has always been that multiple bills are fine, and that you’re better off to pass multiple bills knowing what the real costs are than some number that no one can really justify,” Blunt said. “Years later, we are still trying to figure out how to spend the Sandy money, for instance.”

“I would assume that the biggest debate will be on the first bill, and not whether to do it, but exactly how to do it,” he added.

Sen. John Cornyn of Texas, the Republican whip, told a Houston radio station Tuesday that moving the aid through Congress “will be a rather extended process, and there may be several different appropriations bills.”

“What I would personally like to see is some emergency, up-front funds to help with the temporary expenses,” Cornyn said. “But as you can imagine, it is going to take a while to assess the losses.”

Congress could consider a standalone package, but has struggled to pass supplemental appropriations in recent years unless those dollars are part of a must-pass spending bill.

Congress provided $50 billion to help rebuild after Superstorm Sandy, a legislative effort that has served as a reminder this week that Republican members of the Texas delegation voted against that aid, saying it included money they considered unrelated to the rebuilding. Members of Congress from the Northeast, including Republicans, have been quick to say they are willing to help Texas.

“My committee stands at the ready to provide any necessary additional funding for relief and recovery,” House Appropriations Chairman Rodney Frelinghuysen, R-New Jersey, said in a statement Tuesday. “We are awaiting requests from federal agencies who are on the ground, and will not hesitate to take quick action once an official request is sent.”

The early estimates of Harvey damage are drawn from broad measures of the impact.

“When you look at comparisons, the population size and square mile size of the area impacted both by the hurricane swath and the flooding, it’s far larger than Katrina, far larger than Sandy,” Abbott said. “And if I recall correctly … the Katrina funding was well over $100 billion. I want to say it was over $125 billion. And so if we go on a parallel standard, it should be far in excess of that amount.”

Katrina and Sandy are also benchmarks for the speed of legislative response. Congress provided an initial $10.5 billion on Sept. 2 and another $51.8 billion on Sept. 8, 2005, within weeks of the hurricane hitting. More money followed in subsequent years. Lawmakers took longer to agree on Sandy aid, approving a $50.5 billion package in the first week of 2013, more than two months after the storm.

Initial relief and ongoing rescue efforts have been conducted so far using disaster response funds available to the Federal Emergency Management Agency and other agencies.