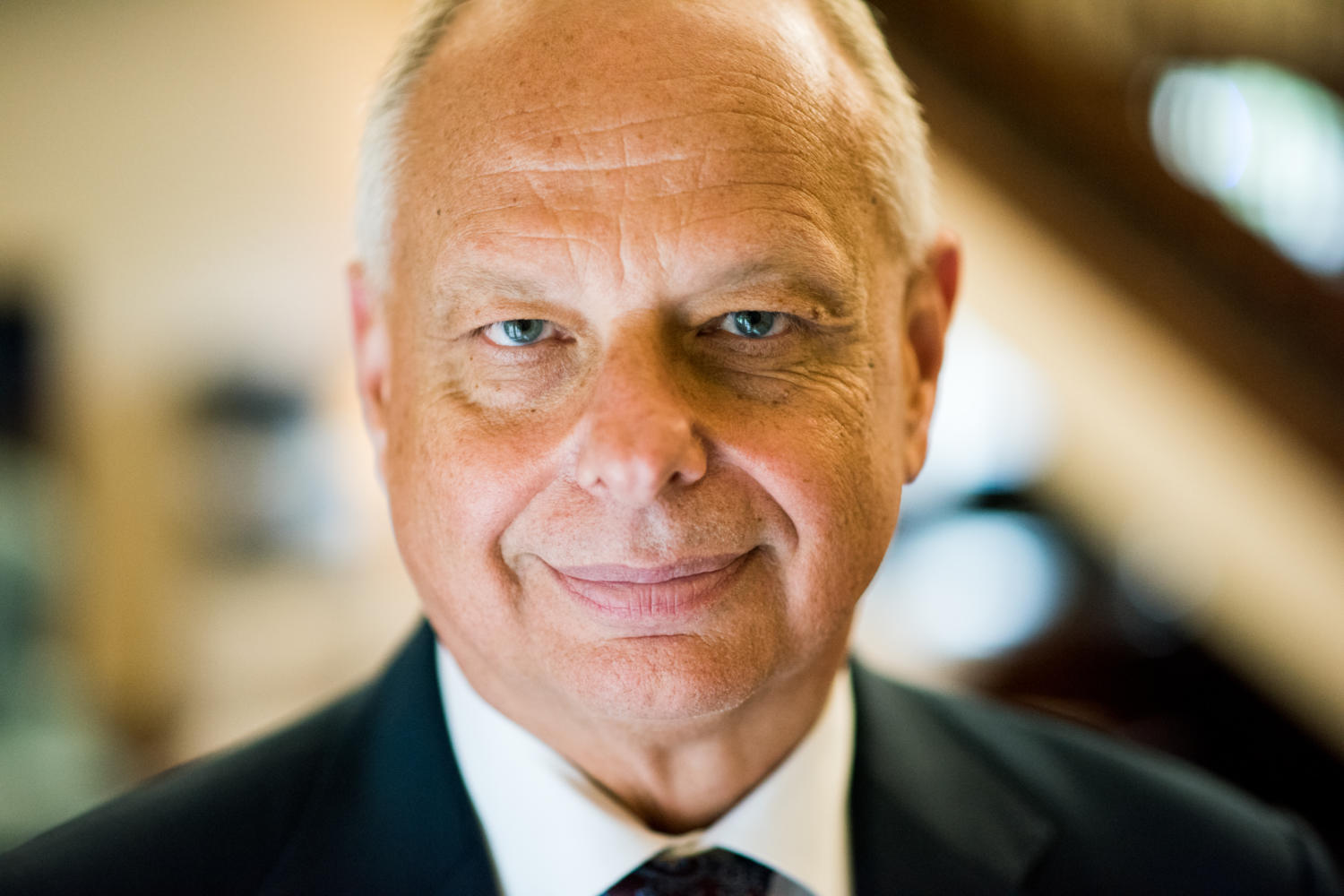 Newly appointed Southern Illinois University chancellor Carlo Montemagno poses for a portrait Monday, Aug. 28, 2017, in Anthony Hall. “Resources do not define your vision or define your ultimate goals – they establish a framework for the path that you have to travel. But they don’t define who we are as an institution,” Montemagno said. “My vision is that we establish SIUC as a destination institution – that people from across the country and around the world know of us and want to come here because of the quality of the educational experience the students get.” (Brian Muñoz | @BrianMMunoz)

Two weeks into his tenure as chancellor, Carlo Montemagno said this is the best job of his life.

“I have fallen in love with our community,” he said.

Montemagno assumed his position on Aug. 15, but he said it was through a friend’s email that he originally heard of the open chancellor position.

“It’s been an experience so far that has widely exceeded my personal expectations,” he said.

During his time at SIU, Montemagno is expected to address a range of issues facing the university, including the lingering effects of the state’s over two-year budget impasse, diversity and inclusivity on campus and balancing science and math on campus with the humanities.

When he was applying for the position, Illinois lawmakers had not passed a state budget in nearly two full years, and Montemagno had to address student, faculty and community concerns about how the historic impasse would affect SIU when he visited campus for a series of forums on June 14.

“The budget never concerned me at all,” he said. “It never was really an issue. It established some of the challenges that I knew we would face, but … resources do not define your vision.”

That phrase is one Montemagno has repeatedly said since he first visit on campus, saying cuts still being felt at the university after the adoption of a state budget do not “define who we are as an institution.”

“I’m accused of being the eternal optimist,” he said at a July 17 meeting following his appointment.

Montemagno said he’s optimistic because he believes all things are possible, and that philosophy has been a driver of his research.

“For me, I always like to look at what it is that other don’t see that is there that we can capitalize on,” he said.

But he said when he researched the university, he saw many opportunities that weren’t being utilized. One such asset he said he hopes to capitalize on is community involvement with the university.

“There is a tie here of long-term investment of the success of SIU with the community,” he said.

According to University Spokeswoman Rae Goldsmith, there are around 20,000 faculty and students at SIU. Montemagno said the thousands of minds combined can bring more ideas than he or his cabinet ever could.

Montemagno said he wants everyone at the university to “work together to promote those ideas.”

“I [am engaging] in dialogue with the major constituency groups and the community as a whole directly to hear what they have to say and take those into account in making decisions,” he said. “I don’t make decisions or my team doesn’t make decisions and somehow spend all our energy trying to sell you on the idea.”

He has consistently brought up the idea of creating a vision of what the university should look like by 2025 since his initial visit. Sunday, students and alumni were sent a survey asking for their inputs of what that vision should be, as a part of Montemagno’s plan to establish a “shared governance” throughout the university.

Students have until Sept. 8 to complete the survey.

One of the biggest challenges when it comes time to release a public vision will be conglomerating all submitted ideas into an overarching goal, Montemagno said.

Montemagno said his personal vision for the university is to “establish SIUC as a destination institution.”

Elements of that include increasing SIU’s recognizability across the nation because of its educational and social experience quality as well as continuing to act as an economic driver of the region.

Though he has a background in science, Montemagno said the humanities are vitally important to retain at SIU.

“I have no plan, vision or idea to transform SIU into a poly-tech [university],” he said.

Currently, seven programs at SIU are in discussion to be removed, including four which are humanities-based. That list was released prior to Montemagno’s appointment.

Montemagno said, however, his support of both STEM- and humanities-based programs does not mean that all programs will be retained.

As a student at Cornell University, Montemagno said he was not pleased with his degree in engineering when he graduated, saying his curriculum never included a design class in learning code involved in engineering jobs.

“I had to take a whole bunch of courses that seemed non-relevant to being an engineer,” he said. “I was kind of grudging about it. Somehow, I thought I was short-changed.”

Years later, as a faculty senate member at Cornell, he said there was a concern the university was losing its competitive edge in engineering to the Massachusetts Institute of Technology.

He said a survey was conducted that showed MIT graduates with engineering degrees had one more job offer and made $3,000 to $5,000 more in starting salary within their first year of graduation compared to Cornell graduates.

But five years after graduation, the same survey showed more Cornell students were serving as project leaders and managers than those at MIT.

Montemagno said he attributes the difference to an education that required more humanities-based courses.

MIT requires only eight hours of humanities-based courses for a bachelor of science, whereas Cornell requires a minimum of 18 credit hours of “liberal studies” for a degree in engineering.

The SIU core curriculum requires no less than 28 credit hours of humanities and social science classes.

“We’re educating the leaders,” Montemagno said of SIU faculty. “We’re not educating to get a job.”

Montemagno said he has met with leaders of the Diversity Council, formed in 2016 by then-interim Chancellor Brad Colwell, and said he plans to “imbed and accelerate the culture of inclusiveness” as part of the university’s identity.

“When you’re a Saluki, you come in all different sorts of flavors,” Montemagno said.

But he said he questions the effectiveness of round table discussions, saying it can devolve into people simply yelling at one another without listening to either side’s views.

Instead, he wants to bring students together through “shared experiences.”

To implement his ideas, Montemagno said he is still designing the specifics, but he plans to expand intercollegiate and scholastic competitions, activities which will bring students across from different universities together.

Montemagno was most recently a professor in engineering, chemical and materials engineering at the University of Alberta in Edmonton, Canada.

From 2002 to 2006, Montemagno served as chair of the Department of Biomedical Engineering at UCLA, which had experienced a 50 percent decrease in state funds over the past 10 years. The school was also facing enrollment issues.

He compared those issues to ones currently being faced by SIU at his public forum in June.

Seven years later after he started his chairmanship, he said he helped to increase all external funds by 40 percent, student enrollment by 25 percent, graduation rates and research expenditures.

Montemagno succeeds interim chancellor Colwell and is the first permanent SIU chancellor since Rita Cheng left the position in July 2014.