Power through for workout gains 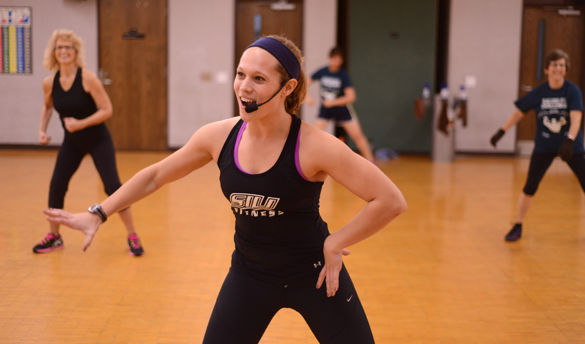 It happens every year: people flock to the gym excited to begin their resolutions to work out consistently — but after only a few short weeks, many of those people stop going.

“The biggest way that people get energized about working out is they talk to a friend or they have a roommate that says, ‘Hey, I’m going to go to the Rec today. Why don’t you come along?'” Rec Center Director Troy Vaughn said. “All they know is what the roommate is telling them.”

Vaughn said the number of people at the Student Recreation Center is “incredibly heavy” at the start of each semester, then it tails off for a variety of reasons. These can include students beginning to focus more on academics and clubs or simply not realizing their limitations when working out.

In a 2013 study conducted by researchers at the University of Vermont observing the infamous “freshman 15,” non-incentivized first-year students only met a set goal of going to the gym 13 percent of the time in a 12-week period.

Dane Kemezy, a senior from Decatur studying exercise science pre-physical therapy, is starting his second year as a personal trainer at the Rec Center and frequently instructs beginners.

He said people should realize their limitations when they first starting to work out.

“A big thing is the misconception of, they have to do what the next to them is doing,” Kemezy said. “They see someone benching 300 pounds, they see people doing that on Facebook and Instagram … A lot of those things are somewhat unrealistic.”

When Kemezy trains new clients with minimal work experience, he said he encourages them to use more assisted weight-lifting machines, which are found primarily in the East Weight Room, in the new Central Fitness Studio and on the upper track.

Kemezy said assisted machines force users into the correct position, and many also detail what parts of the body are being worked for specific exercises.

For his unexperienced clients, Kemezy said he usually encourages them to do two sets of five repetitions, or perform the movement five times in a row then repeat after a brief rest.

“But there’s really no magic number,” he said. “It’s all about listening to your body.”

But people should not work the same muscle groups everyday. Kemezy said the body needs a one- to two-day recovery period following strength training exercises. For example, if someone wanted to build muscles in their arms, that person could work other muscle groups in their back, core or legs on days following arm workouts.

“You aren’t going to get the results you want,” Kemezy said of working the same muscle groups without rest. “There is such a thing as overtraining, and you can do more damage than good by pushing it to a certain point.” 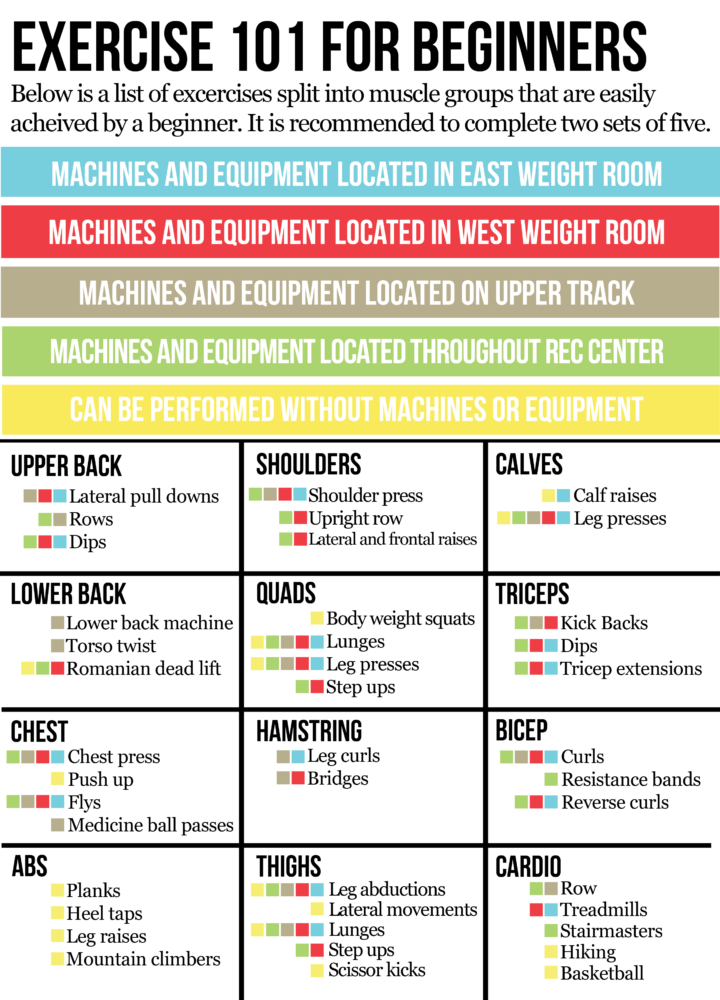 Kemezy said beginners should take two to three rest days a week to allow their bodies to recover.

Incorrect form is another reason many people stop going to the gym, as they have the propensity to injure themselves, according to Vaughn.

Start low in weight, Kemezy said, and continue to go up in increments of 10 pounds until it becomes a mild challenge to lift the weight “but not so much of a challenge that form is compromised.”

After a set, Kemezy said people should feel a tightness and a mild discomfort, but they should never feel a sharp pain. If they do, he said that is an indication to stop and go down in weight.

Kemezy said people should ask Rec Center staff questions about form if they are unsure.

“I myself learned a lot from walking around the Rec Center and asking questions,” Kemezy said.

He also recommended websites like bodybuilding.com or apps such as Jet Fit, which categorize exercises for specific muscle groups and detail correct form for those exercises.

According to Kemezy, muscles begin to adjust to consistent strength training in the first three months of exercise, so people shouldn’t expect to see results after just a few workouts.

“It’s not something that’s going to happen overnight,” he said.

Following that period, he said muscle growth begins to occur.

And working out is not necessarily a multi-hour affair. Kemezy said beginners should work out for 30 minutes to an hour.

For cardio-based exercises, the Rec Center has a variety of machines, including treadmills, stair climbers, ellipticals and rowing machines. Kemezy also said people can simply play sports like basketball or go hiking to fulfill their cardio goals.

At the end of cardio sessions, people should be winded but not to the point where they are lightheaded or feel like they are about to pass out, Kemezy said.

“The rule of thumb is if you can’t hold a conversation with the person next to you or say anything, you should probably cut it down a little bit,” Kemezy said.