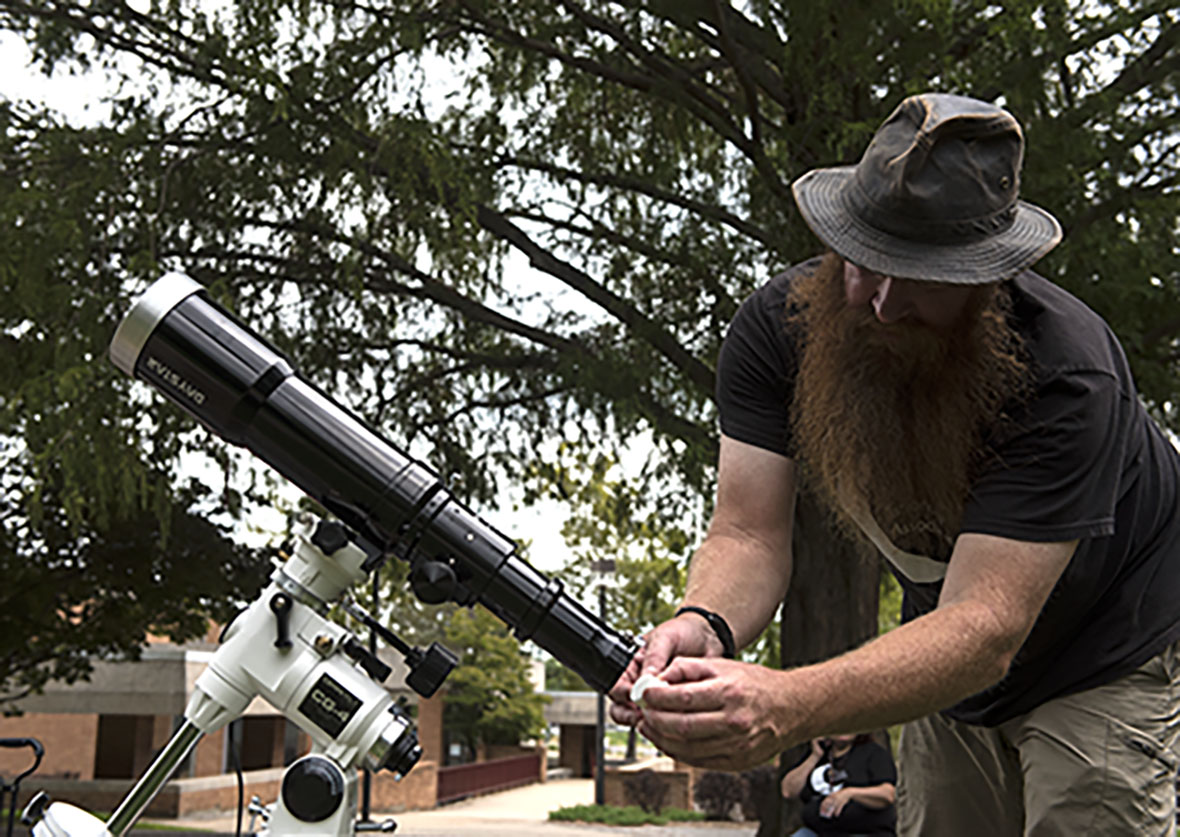 Christopher Mandrell, a graduate student from Marion studying physics, takes apart an 80mm telescope Tuesday, Aug. 15, 2017, outside Neckers after a practice run aligning the telescope in preparation for the eclipse. Mandrell will camp out at the University Farms “dark site” the night before he the eclipse so he can set up for the experimental run the following day. “This is the classic ... telescope,” Mandrell said. “It’s a refraction scope just using the lenses to focus just like your glasses.” (Cory Ray | @coryray_DE)

Most people will turn their eyes to the sun Aug. 21 to catch a rare glimpse of a total solar eclipse, but four SIU students will also point telescopes to the sky as part of a national research project.

With the eclipse expected to travel coast to coast from Oregon to South Carolina, the Citizen Continental-America Telescopic Eclipse (CATE) experiment will deploy 68 telescopes along the path of totality, according to the project’s website.

CATE Group 41 at SIU is composed of two undergraduate and two graduate students, but nationally, it is composed of a mixture of citizens and high school and college students.

Researchers such as Christopher Mandrell said the goal is to capture 90 minutes worth of images, and according to the experiment’s website, each station will capture 1,000 images of the eclipse.

Mandrell, a graduate student from Marion, began work on the project over a year ago as an undergraduate and will continue as he enters his masters program for physics.

In those images, researchers hope to capture the sun’s corona — its outermost atmosphere and an elusive site under normal conditions.

“There’s this gap in our knowledge,” Mandrell said. “We’ll see what it looks like in the outer corona. We don’t know what happens in this zone when we can’t look at it.”

Dinuka Gallaba, a doctoral student from Sri Lanka studying physics, has been working on the project for the past two months, running practice sessions and calculating data such as alignment and camera exposure.

Because the sun shifts positions in the sky seasonally, students are calculating telescope alignment in relation to its latitudinal and longitudinal location on Earth as well as determining the angle at which it will need to be pointed at the moment of the eclipse.

To take photos of the eclipse, the telescope will be connected to a camera and a laptop that will allow them to see the images being captured. Gallaba said the camera will take pictures of the sun at different exposures.

“If we can zoom in really close, we can see the solar flares during the eclipse time,” Gallaba said.

Mandrell said the four students will go to University Farms the day of the eclipse to a site known as the “dark site.” They will begin taking images as the sun enters a partial eclipse phase and will continue until the additional partial phase following totality has finished.

From there, the images will be studied by NASA and the National Solar Observatory, according to Mason Parrone, a junior from Murphysboro studying industrial technology and applied engineering.

Parrone, who began work with the experiment through the Saluki Astronomy Association, said he just wanted to learn more about astronomy but he never expected to be submitting research to NASA.

“I didn’t expect when I first joined that it would come this far,” he said. “I’ve definitely learned a lot from being involved.”

SIU’s involvement with the CATE Experiment stretches back to Aug. 2015 when Sarah Kovac, who graduated in May with a bachelor’s in physics, first heard of the project after transferring to the school.

Kovac later traveled to Indonesia in 2016 for a total solar eclipse and became a “master trainer,” instructing CATE researchers throughout Illinois. Having conducted similar research before, Kovac said she can build upon her experience for this eclipse.

“Something that we didn’t think of is the emotional impact and the people around you,” she said. “We need to be able to stay focused while we’re getting data but also being able to enjoy the eclipse.”

Gallaba said there are three more CATE stations in the region: one at Bald Knob Cross, one at Giant City State Park and one at Southeast Missouri State University. Additionally, Kovac will set up a telescope at the SIU Stadium.

Staff writer Cory Ray can be reached at cray@dailyegyptian.com or on Twitter @coryray_de.