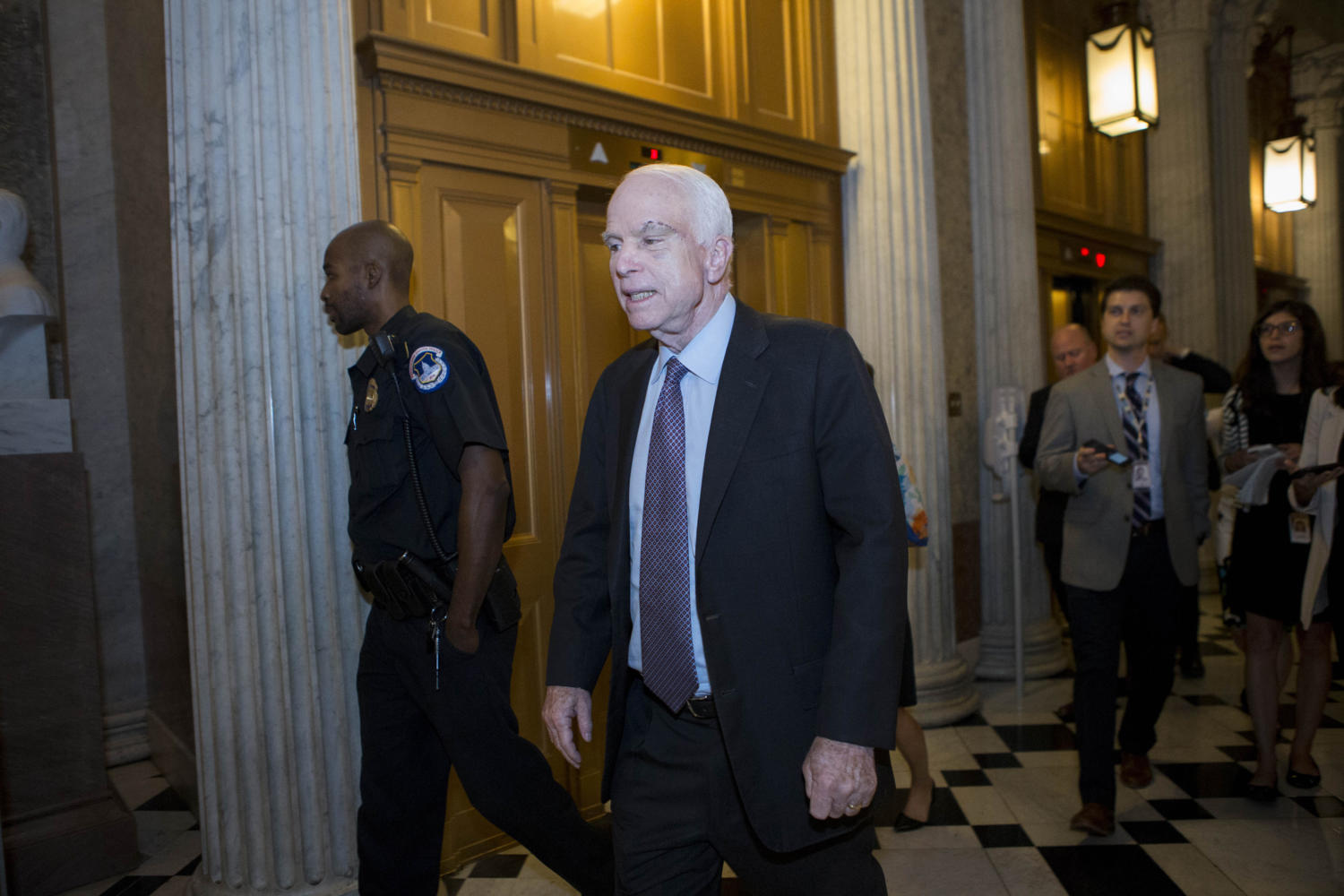 Sen. John McCain (R-AZ) walks to the senate chamber prior to voting against a 'Skinny Repeal' bill which would repeal The Affordable Care Act on July 28, 2017 in Washington, D.C. The Republican bill failed 49-51 with McCain, Sen. Susan Collins of Maine and Sen. Lisa Murkowski of Alasaka voting 'no' alongside Democrats. (Alex Edelman/ZUma Press/TNS)

WASHINGTON — Sen. John McCain is usually happy to spar with reporters, but he ducked into an elevator ahead of the Senate health care vote late Thursday without saying a word about how he would vote.

The Democratic leader had been talking with the Arizona Republican all week — four, five times a day — ever since McCain returned to work after being diagnosed with brain cancer.

Earlier in the week, McCain had dramatically salvaged the stalled GOP bill by voting to begin debate, only to go on to deliver a blistering speech against his own party leaders’ partisan, closed-door process in crafting it.

“We’ve been spinning our wheels on too many important issues because we keep trying to find a way to win without help from across the aisle,” he told them. “We’re getting nothing done.”

Schumer and McCain have been longtime colleagues, a kind of frenemies who seem like throwbacks to an earlier era of Congress. They worked together on big legislation, including the 2013 immigration overhaul — grand ideas that seem all but impossible in today’s Congress.

They had plenty to discuss.

“About the Senate, about it working again, about working together, and about how this bill was so poor for the American people,” Schumer said.

“And he knew that, so did half his colleagues, but he had the courage to vote no.”

The moment stunned the Senate when McCain stepped up to cast his vote — a single down-turned finger — dooming the health care bill. Audible gasps filled the galleries, which were packed with onlookers.

But his vote — along with “no” votes from Republicans Susan Collins of Maine and Lisa Murkowski of Alaska — did more than shelve the long campaign to repeal the Affordable Care Act.

It cracked open a new divide in the Senate, which seems to be split not so much between Republicans and Democrats, but by those senators who want to work together versus those stuck in hardened partisan tribes.

“There’s a mood right now in the Senate — from McCain’s comments the other day to Schumer’s comments tonight — there’s a growing sense, ‘Let’s get this done,'” said Sen. David Perdue, R-Ga. “This is what democracy is. It’s messy.”

Voting on the GOP’s last-ditch effort to repeal the Affordable Care Act was supposed to begin shortly past midnight, but Vice President Mike Pence, who had arrived at the Capitol to cast a possible tie-breaking vote, was engaged in conversation with McCain. He was almost certainly trying to turn the senator’s vote.

The huddle dragged on. Senators milled about, looking glum, as minutes ticked away. Other senators stopped by McCain’s desk, his longtime ally, Sen. Lindsey Graham (R-S.C.), always close by. The chamber came to a standstill.

Then at one point, the 80-year-old Arizona lawmaker abruptly walked across the Senate floor, stunning the Democratic side of the aisle, as Schumer and more than a dozen senators quickly gathered around.

What McCain told them seems obvious now. He would vote against the bill.

“McCain had not said to anyone else that I know of what he was going to do,” said Sen. Richard J. Durbin, the assistant Democratic leader.

“I actually thought he was going to be a yes,” said Sen. Bill Cassidy, R-La., a physician who has been working intently on the health care overhaul. “I was surprised.”

Except for a hug from Sen. Dianne Feinstein of California, the other Democrats did not tip their hand.

Pence made one more run at McCain, who disappeared into the cloakroom, presumably to take a phone call. Whispers speculated that it was from the White House.

But then the roll call voting began.

But that moment also was telling, as McConnell turned his back to Democrats and addressed his own party’s senators.

The body language did not go unnoticed, especially because the Republican majority may not be able to pass a health care overhaul or other big legislation, such as tax reform, without bipartisan cooperation.

Then Schumer gave his own speech, offering to turn the page — not just on this issue but on the others that have become stuck in the partisan morass. He vowed to quickly move on stalled nominations and voting on a pending defense bill.

Some senators stuck around afterward to share in the moment, crossing the aisle the way McCain did to chat with one another.

The chairman of the Health, Education Labor and Pensions Committee, Sen. Lamar Alexander (R-Tenn.), huddled with his Democratic counterpart, Sen. Patty Murray of Washington, talking about the panel’s next steps, senators said.

“There are real problems with our health care system that are only going to get fixed if we work together.”

Skepticism, though, ran deep, especially among those who have seen this before. Cassidy had tried unsuccessfully to win Democratic support of a health care bill he drafted with Collins.

“You’d like to say bipartisanship, but I keep coming back to the fact that Cassidy-Collins was written to invite bipartisanship and it was rejected by every single person on their side,” he said as he left the Capitol, Democratic protesters celebrating outside.

“Nothing’s ever accomplished by a pessimist, so maybe this is what had to happen for there to be bipartisanship. … So we’ll see.”