Rauner vows to veto education funding bill, demands Democrats send it to him 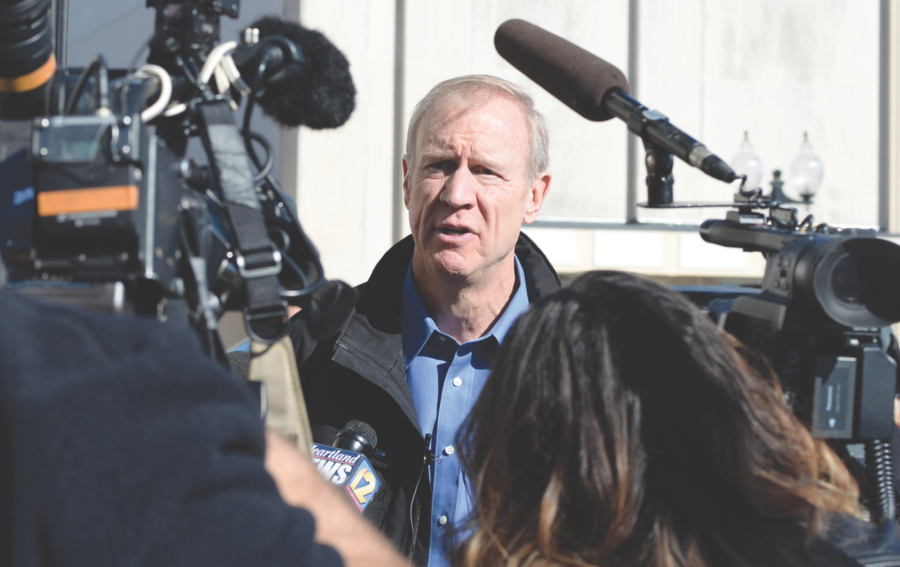 Republican Gov. Bruce Rauner on Monday said he plans to rewrite a Democrat-passed education funding formula bill, setting up a likely showdown with Democrats who control the General Assembly as school districts across the state remain caught in the middle.

The governor visited schools in downstate Mount Zion and Rockford, accusing Democrats of looking out for “Chicago special interests” and playing “political games” with schoolchildren. He rattled off a list of rural and suburban communities that would gain millions of dollars in school aid by removing what he calls a “bailout” for the Chicago teacher pension system.

The governor called on Democratic House Speaker Michael Madigan and Senate President John Cullerton to send him the legislation so that he can use his veto pen to make the changes.

Rauner’s declarations came amid a continued staff shake-up that has seen several key staff members be fired or resign. They’ve been replaced in many cases by activists from a prominent conservative think tank, a move viewed as a sharp right turn ahead of next year’s re-election bid.

On Monday, the fallout continued as more than a half-dozen staffers in Rauner’s office quit. Adding to the day’s drama, the governor’s office fired the governor’s travel assistant after offensive statements were found on the new hire’s Twitter page.

The staff shake-up came after Rauner lost a battle with lawmakers, who passed a budget and income tax increase over his vetoes. The fate of the funding formula rewrite bill has become the latest flashpoint between Rauner and lawmakers after the legislature inserted a clause in the budget that says general state aid for schools can’t be spent unless it goes through a new “evidence-based” formula.

The formula bill passed by Democrats in late May creates such an “evidence-based” system for distributing state aid, but Rauner opposes the bill because it includes $215 million in pension assistance for Chicago Public Schools and it allows the district to keep a special block grant worth $250 million.

Rauner indicated Monday that he plans to use his veto pen to zero out CPS’ pension money so that it instead would go to classrooms in rural and suburban school districts, which aren’t responsible for their own pension costs.

Whether Rauner’s amendatory veto would be upheld by lawmakers is an open question, but recent events at the Capitol suggest that the governor could have trouble blocking an override. Madigan would need just four Republicans to break ranks with the governor and help his 67 Democrats overturn such a veto. Unlike the tax hike vote, which was precarious even for some Democrats, making sure schools get the money they need to open their doors is a much easier vote to cast, even if opponents label it a vote in favor of bailing out Chicago.

On Monday, Rauner portrayed himself as undeterred by recent events, though he lamented what he described as “spin from Speaker Madigan’s operation” that the governor has turned his back on poor, minority students in Chicago.

“That is so hurtful to me, so insulting to me,” Rauner said. “I’ve spent 25 years of my life, my wife and I, helping improve the public schools in the city of Chicago, not only with our time but also our financial resources.”

Rauner also hurled his own insults, charging that school superintendents who support the funding formula bill had been “intimidated” by Madigan and “live in fear” of the veteran speaker.

When Rauner embarked on his budget showdown with Madigan and Cullerton in spring 2015, the governor indicated “crisis creates opportunity,” and he said he’d use “leverage” gained to win approval of his economic agenda.

Now the governor says he’s worried that Democrats are trying to employ that strategy on him. Rauner asserted Monday that Cullerton was holding off on sending him the school funding formula bill to “create crisis and then force the pension bailout for the city of Chicago and put a new permanent structure in place that hurts our local schools every year going forward.”

Asked if Rauner’s theory was true, Cullerton spokesman John Patterson said “no,” but would not say when the legislation would be sent to Rauner’s desk.

“The Senate slowed down the process because Gov. Rauner threatened a knee-jerk veto,” Patterson said in a statement. “There are ongoing discussions regarding when to deliver the legislation to his desk.”

The dispute over the bill is rooted in a political and geographic power struggle between Rauner, who draws his support from suburban and downstate voters, and Democrats, whose base is primarily in Chicago.

Rauner’s decision to ratchet up pressure on the school funding issue also offered a distraction from the turmoil in his office, which has spilled into a second week.

The defections continued Monday, with staff members from various corners of his administration putting in their notice. Asked about the resignations during his Rockford stop, Rauner tried to downplay them.

“It’s just part of the process,” Rauner said. “The critical thing for me is, everybody who serves in government should put the best interests of the people of Illinois first. I demand that of everyone. Loyalty anywhere else is wrong.”

Meanwhile, Rauner’s new travel assistant Ben Tracy — hired to replace a staffer who was asked to leave last week — was fired on his first day on the job after revelations of past racially insensitive and homophobic statements on Twitter. Rauner spokeswoman Laurel Patrick said the tweets were “unacceptable,” and that Tracy had been dismissed.
___
(c)2017 the Chicago Tribune
www.chicagotribune.com
Distributed by Tribune Content Agency, LLC.