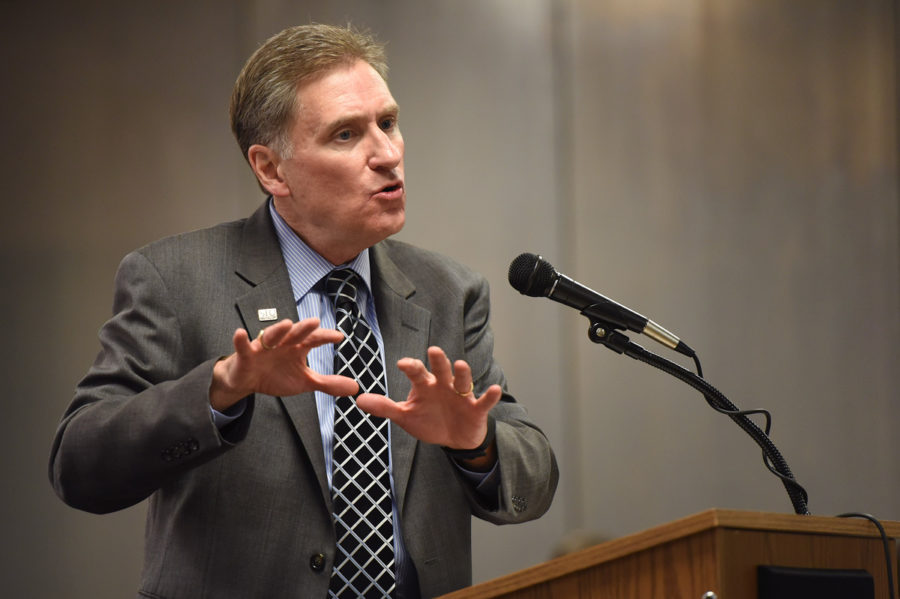 SIU President Randy Dunn will act as chancellor for the Carbondale campus until the next regularly scheduled Board of Trustees meeting July 13, according to an email Dunn sent to faculty and staff Monday.

Interim Chancellor Brad Colwell’s contract expired June 30 in the midst of the ongoing search for the university’s permanent chancellor, leading the board to ask Dunn to serve as chancellor until it can reach a decision between the finalists.

Over the course of the eight-month search, candidates have gradually dropped out of the running, citing fiscal concerns at the campus and state level or taking jobs elsewhere, leaving Colwell and Carlo Montemagno as the sole contenders. Montemagno is currently a professor in engineering, chemical and materials engineering at the University of Alberta in Edmonton, Canada.

This isn’t the first time Dunn has served as acting chancellor. Before Colwell’s appointment as interim chancellor, Dunn filled in alongside his regular duties as the university president for nearly a year following the November 2014 death of interim Chancellor Paul Sarvela. SIU has not had a permanent chancellor since 2014 when Rita Cheng left to become president of Northern Arizona University.

With the June 30 retirement of interim Provost Susan Ford, Dunn’s email also said Associate Provosts Lizette Chevalier and David DiLalla are jointly taking over the provost’s responsibilities until a new chancellor is chosen and a permanent provost can be hired.

“We have effectively worked under both of these temporary structures — the system president also wearing the hat of acting chancellor and the provost’s duties shared by the team of associate provosts — in the past,” Dunn said in the email. “With your help, I am confident that we will stay on track thanks to Drs. Chevalier and DiLalla and many other dedicated staff.”