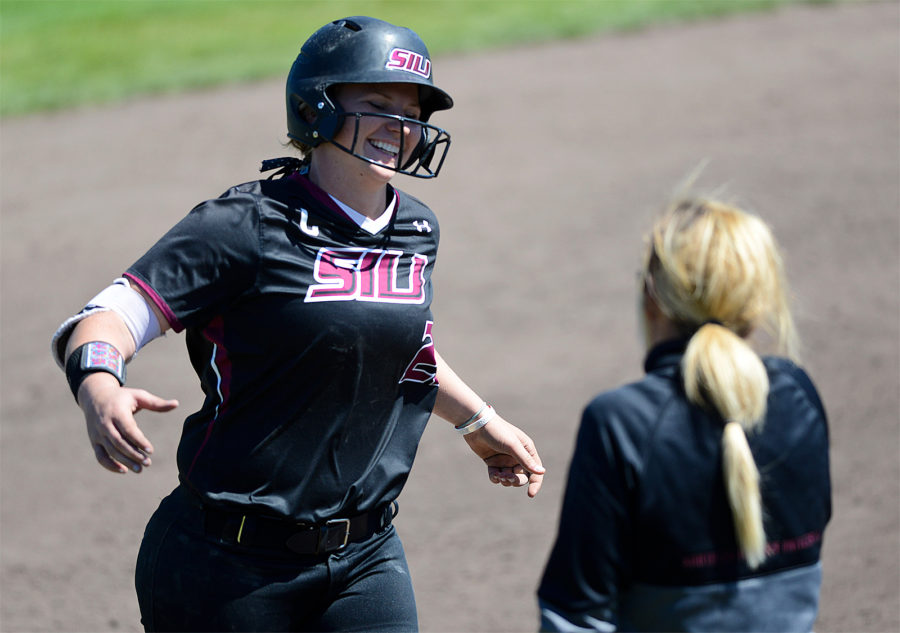 For the first time in 26 years, Saluki softball has been crowned Missouri Valley champions.

SIU defeated Northern Iowa on Saturday 4-3 to claim the title in an instant classic for Saluki history.

With the win, Southern will make its 11th total appearance in the NCAA tournament, its first since it hosted a regional in 2007.

UNI struck first with a run in the third, but SIU bounced back with four runs in the fourth.

It began with a two-RBI double from sophomore left fielder Eyrika Brandenburg, then Baranski scored on a wild pitch shortly after. Senior first baseman Shaye Harre then added to her own program record for RBIs with a single that scored Brandenburg.

Harre was named the tournament MVP and softball’s Elite 18 award winner after the game. Through SIU’s three games she went 6-10 with five RBIs, a double, a home run and three walks.

UNI earned one run back on a solo home run from sophomore designated player Bailey Lange in the fifth inning.

The Panthers appeared to be ready to take over the game in the sixth with a leadoff single from junior left fielder Brittney Roby and a double from right fielder Macey Wolfe to put the tying run in scoring position.

Saluki coach Kerri Blaylock turned to junior Savanna Dover to try to escape the menacing situation, just as Jones did for her on Friday night, and did just that.

Dover allowed a sacrifice fly which scored UNI’s third run, but then got consecutive foul outs to preserve the lead heading into the final inning.

Before Dover walked back out into the pitching circle for the seventh inning, the team huddled together for a team hug, showing its faith in the junior to finish off the game.

She gave up a leadoff walk in the seventh, but the tying run never left first base as the final out was caught in center field by senior Merri Anne Patterson and the team rushed to dogpile Dover to celebrate the championship victory.

Patterson joined Harre, Jones and Dover on the MVC All-Tournament team. Patterson went 3-10 in the tournament but showed off her biggest strength — her defense — all weekend with several flashy plays in the field.

Meanwhile, Jones and Dover pitched every inning of SIU’s three games, allowing six runs combined in the 22 innings on only 18 hits.

While SIU’s ticket is punched for softball’s big dance, its destination will be unknown until 9 p.m. Sunday when the NCAA announces its bracket on the NCAA Softball Selection Show on ESPN2.