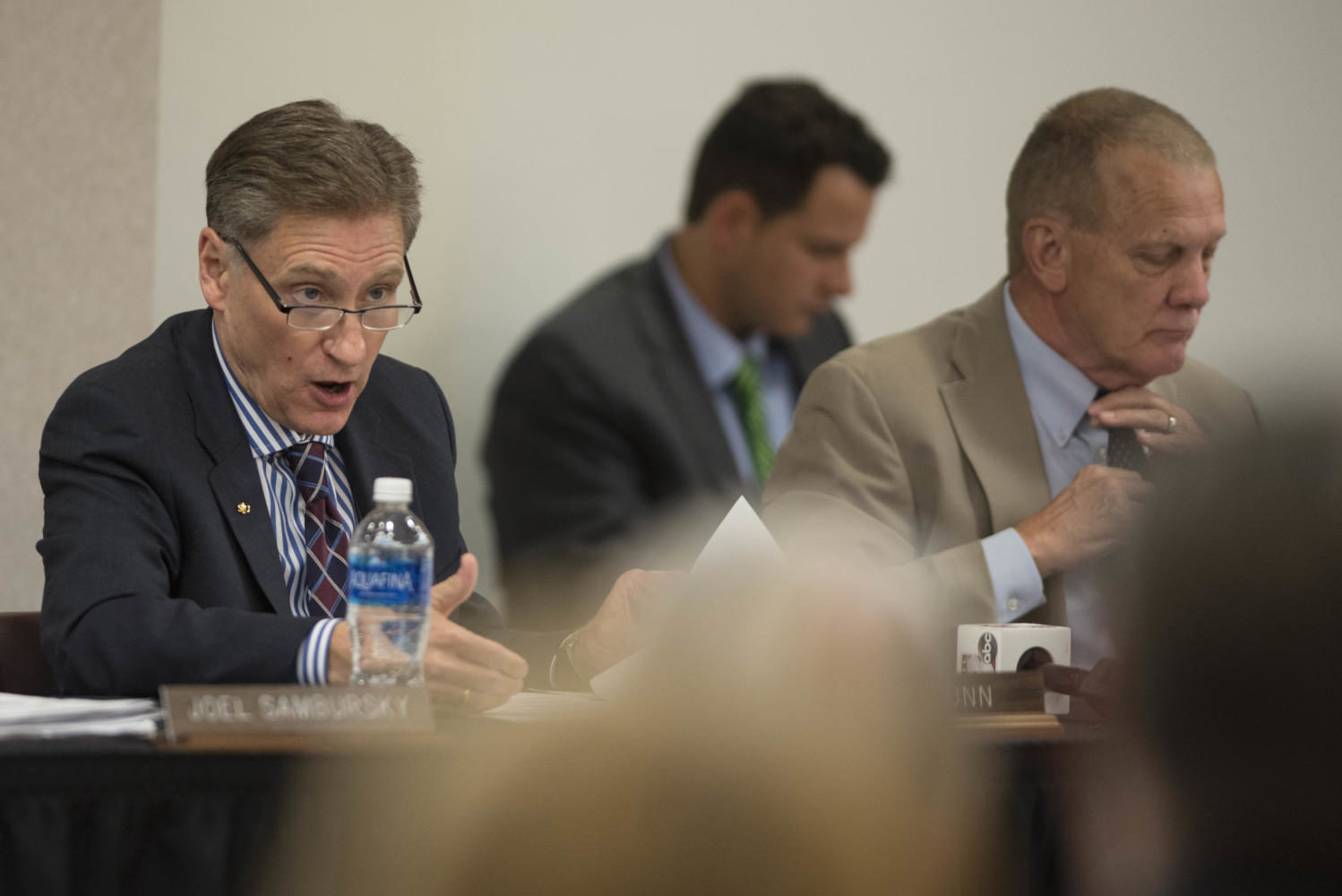 SIU President Randy Dunn speaks to meeting attendees Wednesday, May 10, 2017, in Edwardsville during a special meeting of the SIU Board of Trustees. (Bill Lukitsch @lukitsbill)

The SIU Board of Trustees on Wednesday voted to table the appointment of a chancellor for SIUC and passed a plan to loan up to $35 million from SIU-Edwardsville to the cash-strapped Carbondale campus.

During the meeting in Edwardsville, the board was expected to announce a permanent chancellor for the Carbondale campus, but instead voted to table the appointment and added two possible candidates to the list of finalists.

The trustees spent more than two hours discussing the chancellor spot during a closed executive session but were unable to come to a conclusion, Chairman Randall Thomas said after the meeting. He said the board has “a lot more work to do.”

The additional candidates will be brought to campus in the coming weeks to interview with university officials and representatives of constituency groups, SIU President Randy Dunn said.

University officials declined to name the other two finalists, but said the three finalists under consideration will remain in the search. Those interviewed on campus in April include SIUC interim Chancellor Brad Colwell; Carl Pinkert, vice president for research and economic development at the University of Alabama; and George Hynd, president of Oakland University in Rochester, Michigan.

The trustees also voted to approve the loan that will come from SIUE’s unrestricted reserve funds.

University officials have said the loan would be repaid over the course of 10 years. But in his System Connection, a column emailed to faculty and staff, Dunn on Wednesday said the recommendation in front of the board will set a borrowing cap, as well as a “pledge that the first obligation on the replenishment of funds from SIUC will be to SIUE once a state budget is in place.”

The university president said SIUC’s financial staff projects the campus will go into deficit in late May without the loan.

During a board meeting in early April, in which the trustees delayed the loan, Dunn delivered a similar message, saying the borrowing plan will prevent SIUC from going “into the red.”

Faculty representatives from SIUE voiced concerns with the loan during the public comments portion of the April 6 meeting. Those present took issue with the proposal for the Carbondale campus to borrow from the other university’s “rainy day fund.”

Kim Archer, an associate professor of music at SIUE and vice president of the university’s faculty association, likened the “unchecked borrowing” at the Carbondale campus to an addiction and urged the board to set the proposal aside.

“They burned through much of their own reserves, apparently they burned through a good deal of the system’s savings, then they tapped the medical school dry and now they’re coming after us,” she said. “We say: We thought ahead. We were proactive.”

David Johnson, president of SIUC’s faculty association, said he sympathizes with the frustration expressed by SIUE employees. He asked the board to spare university programs amid the impending budget cuts, using the board’s decision to approve a $2 million purchase of athletic gear as an example of its need to prioritize its academic mission.

Vice-Chair Phil Gilbert has said he understood the reluctance from SIUE constituent groups to move forward with the loan, but called it the only financial option available “for the survival of SIUC.”

In late April, SIUE’s Faculty Senate adopted a resolution to say it opposes a strategy “that jeopardizes the fiscal and structural well-being of our university [and the SIU system] to support operations” at SIUC “that are unsustainable in their current configuration.”

About two weeks later, the Senate’s executive committee said it wants to see SIUC flourish, but called on administrators to create a new identity for the campus.

“It is distressing for the SIUE faculty to witness the desperate situation confronting our colleagues at SIUC,” the Senate’s executive committee said in a statement. “We sincerely hope that our partner university will respond to the urgent need to employ strategic budget decisions as a means to create a distinctive new mix of academic programs and a new institutional identity for SIUC.”

The Carbondale campus has used about $83 million of unrestricted reserve funds for continuing operations since the beginning of the state’s historic impasse in July 2015 between Republican Gov. Bruce Rauner and Democrats who control the state Legislature, including House Speaker Michael Madigan. That figure includes $21 million in cuts the campus has already implemented, Dunn said at the April meeting.

The university president unveiled the plan for a loan in his late March announcement informing the Carbondale campus to cut at least $30 million in spending from its $450 million budget.

After Dunn’s announcement, interim Chancellor Brad Colwell, who is one of three finalists for the permanent chancellor position, said the changes at the university “will be challenging and painful” and “almost certainly include layoffs.”

This story will be updated. Check back for more details.