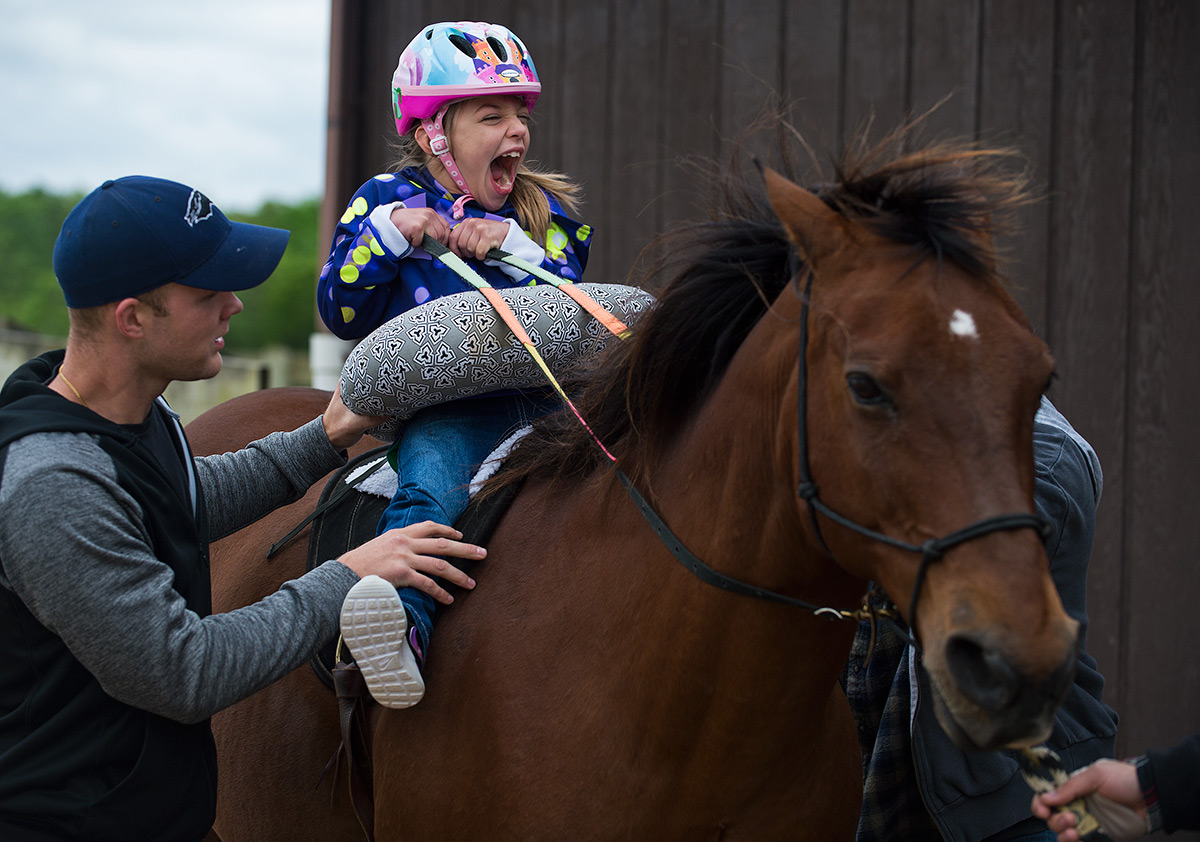 Kennedy Baker, 7, of Goreville, rides Dauber with the assistance of Dallas Broeker, a senior from Chadron, Nebraska, studying nursing, during a session of Specialized Equine Services and Therapeutic Riding on Monday, May 1, 2017, at Giant City Stables in Makanda. The session marked the second time Baker was able to ride a horse without the assistance of another rider to support her. “It’s like when you first see your kid making the first two steps by herself,” said Santiago Tomas, barn manager at the stables who typically rides with Baker. “It kind of gives you pride.” (Jacob Wiegand | @jawiegandphoto)

For about three years, Kennedy Baker did not have the ability to hold herself up on a horse. Last month that changed.

Baker, a 7-year-old from Goreville who has cerebral palsy and a brain injury called hypoxic-ischemic encephalopathy, always needed another rider to sit on the back of the horse with her for support, but now she is able to take the horse’s reins alone. She regularly attends therapy sessions through Specialized Equine Services and Therapeutic Riding at Giant City Stables in Makanda.

“It’s like when you first see your kid making the first two steps by herself,” said Santiago Tomas, barn manager at the stables. “It kind of gives you pride.”

Before last week, Tomas always rode on the back of the horse with Baker, a job he said he has performed since she started therapy sessions. In the latest session, Kennedy rode without assistance for the second time.

Tomas said he rode about half of the session with Kennedy before letting her do the last half on her own.

Kennedy’s mother, Teresa Baker, said she began bringing her daughter to the therapy sessions because Kennedy was having some issues with her hips.

“She used to have a big problem with leaning over and not being able to sustain her posture in an upright position,” Teresa said. “And with the horse therapy I think that has helped a lot with stabilization of that.”

After the therapy sessions, Teresa said Kennedy also has more ability to move herself in and out of her wheelchair.

Patricia Nardini, president of Specialized Equine Services and Therapeutic Riding, said the therapy works a person’s core, balance and range of motion all while the participant is having fun.

“The horses are not judgmental,” Nardini said. “They have an incredible healing energy and their emotional intelligence is beyond our imagination.”

She said a horse’s gait is very similar to that of a human’s, which helps riders create muscle memory while sitting on the horse.

Ramona Twellman, owner of the stables and the riding instructor for Specialized Equine Services, said the therapy helps trigger muscles on both sides of the spine for children with cerebral palsy.

“The walk of the horse mimics the hip rotation for walking so it’s real similar to a human,” she said. “People that aren’t walking get the rhythm of the walk by riding the horse.”

Twellman said the sessions can also help adults who have a range of physical and mental conditions.

Nathan Alcorn, a senior from Galesburg studying outdoor recreation, worked in therapy sessions at the stables as a way to complete fieldwork for his major.

“Many of our clients aren’t able to walk on their own or do certain things with their hands or feet or legs,” Alcorn said. “When they’re on the horse, the horse is their legs and they get to feel the experience of walking through the horse.”

Photo and multimedia editor Jacob Wiegand can be reached at [email protected] or on Twitter at @jawiegandphoto.