The Daily Egyptian • May 3, 2017 • https://dailyegyptian.com/69420/sports/siu-mens-womens-tennis-finish-final-matches-as-conference-runners-up/ 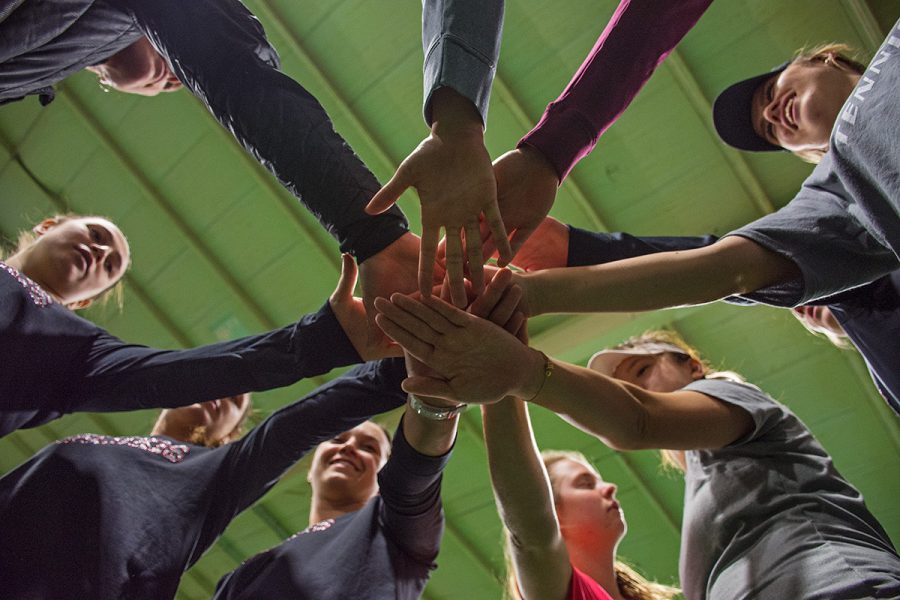 Saluki women's tennis players place their hands together Friday, Jan. 27, 2017, at Garden Grove Event Center in Carbondale during their first practice after hearing the news the team would be cut after this semester. Director of tennis Audra Anderson said the upperclassmen and maturity of the team help make the difference during this time. “It fires me up even more to have the best season," Anderson said. "If anything it will help us because you don’t have anybody sitting back and saying ‘well there’s next year.’” (Athena Chrysanthou | @Chrysant1Athena)

As Saturday night turned into Sunday morning in Bloomington, four Missouri Valley tennis teams went to sleep with dreams of a conference championship, knowing their seasons could wind to a close in the coming day.

However, for two of these teams, the weekend meant so much more. SIU men’s and women’s tennis had both battled through two rounds to make the conference championship match in their final season as a program.

“Going into the day, I definitely felt a huge sense of pride in the team,” said graduate assistant coach Jonny Rigby, who oversees the men’s program.

For his team, it was a battle to just reach the final match. The Salukis met Wichita State, a team also competing in its last MVC tournament, in the semi-finals and for a while it didn’t look good for the Salukis.

After clinching the doubles point with a close 7-6 win by senior Wilder Pimentel and freshman Param Pun, Wichita State stormed back and earned two singles wins before SIU could get one.

The Salukis then rallied with wins from senior Piotr Baranski in the No. 1 spot and junior Michal Kianicka in the No. 3 spot, to draw within one match away from clinching the team victory.

That is when things started to look bleak for SIU. The Shocker players had both come back from a set down to tie the two remaining matches. In the No. 2 spot, Shocker sophomore Marius Frosa had pulled away and looked ready to win, leaving the weight of the match on the freshman Pun’s shoulders.

But the freshman came through, winning the decisive set — and also the match — 6-3 in his second crucial victory of the day.

“For a long period in the match it looked like we weren’t going to win,” Rigby said. “But, the guys kept fighting and in the end our freshman Param came up really clutch and got the win in and as a team that shows everyone what we’re all about as a team.”

Meanwhile, on the women’s side, the SIU team had barely broken a sweat in making the finals. On Friday, SIU — the conference’s No. 2 seed — steamrolled past Missouri State without dropping a set in an official, finished match.

The next day was nearly the same story, with the Salukis dropping only one singles match to Bradley in a 4-1 result. The Saluki seniors led the way through the first day of the weekend as Ana Sofia Cordero and Meagan Monaghan both entered the final match undefeated.

Both Saluki teams entered Sunday’s matches with a chance to earn some redemption against a team that had gotten the best of SIU in the past.

The men would face Drake, while the women would face Wichita State. Drake was the only team to defeat SIU in regular season conference play and Wichita was one of only two schools to defeat the Saluki women this season.

Unfortunately, neither the Saluki men or women were able to finish off program history as champions. Both teams lost in their respective final, 4-0.

“It sucks being so close to almost making it to the national tournament, but it was a good year,” junior Daniel Martinez said. “I’m sad won’t play together as a team again … won’t play for SIU again.”

Despite coming back to Carbondale without a championship, both teams received plentiful recognition from the conference.

From the men’s team Baranski, Pimentel, Kianicka and junior Alex Pozo each received All-Conference honors in their final years as Salukis. On the women’s side, Cordero and junior Xiwei Cai combined to form the No. 2 doubles All-Conference team and were both named to the All-Select team.

Meanwhile, senior Polina Dozortseva earned the Elite 18 award for women’s tennis, which honors “the highest achievement in academics and athletics by a student-athlete in each MVC-sponsored sport.” This is the second year in a row Dozortseva received the award.

As the now-former SIU athletes are back on campus, Rigby said the emotions of the finality in the program are now sinking in.

“When the match finished, and even [Sunday night] and [Monday], it’s a sad empty feeling knowing that it’s all ended,” Rigby said.