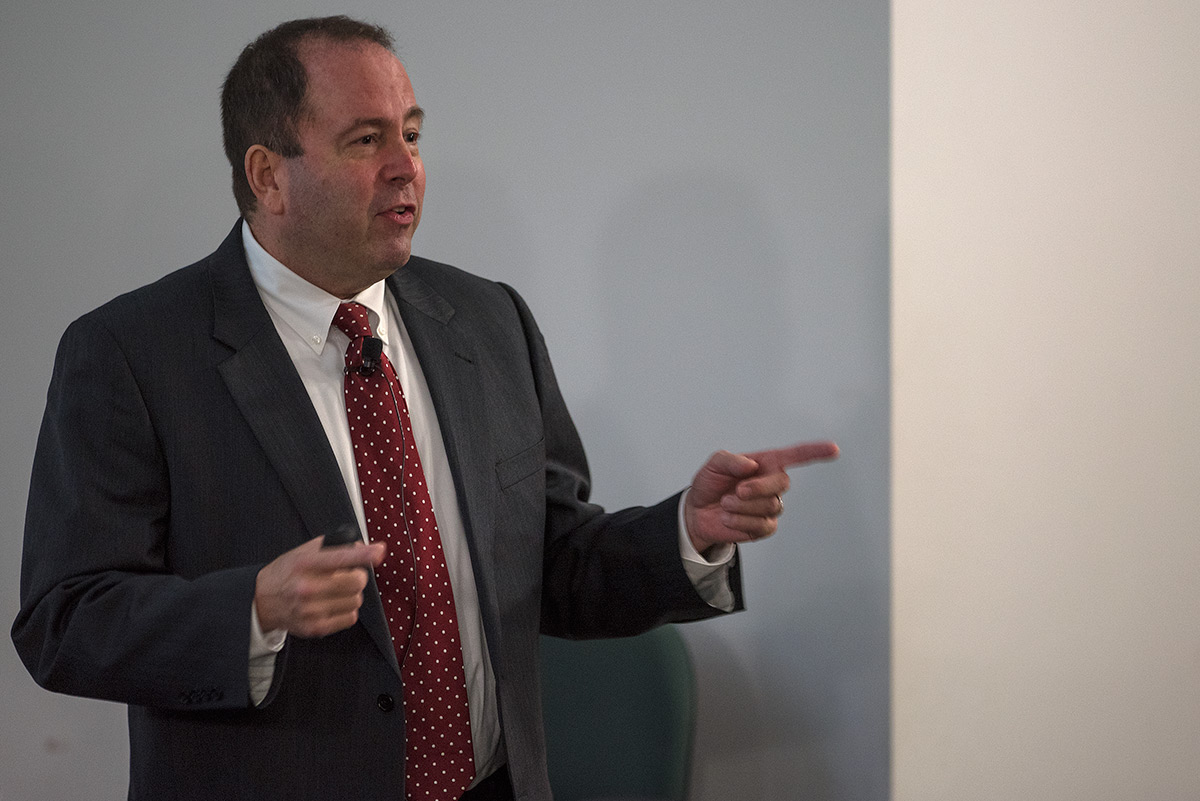 Chancellor candidate Carl Pinkert speaks at a forum on the morning of Thursday, April 27, 2017, in Guyon Auditorium. Pinkert currently holds the position of vice president for research and economic development at the University of Alabama in Tuscaloosa. (Jacob Wiegand | @jawiegandphoto)

Pinkert, who is vying to become the next chancellor at the university’s largest campus, said his master’s degree in animal science from SIU in 1977 helped launch his career.

“I have a huge debt to Southern Illinois University,” Pinkert said.

During a Thursday morning forum, Pinkert, who took over his role as vice president for research and economic development at the University of Alabama in November 2013, discussed his plans for SIU. Most of the forum centered around recruitment, retention and further utilization of the university’s alumni base.

When asked about recruitment and retention by Anthony Travelstead, president of the Civil Service Council, Pinkert said the university could improve its marketing and selling of programs because sometimes the university is “very modest about the things we are doing overall.” He said identifying signature programs in every college would show potential students what they can accomplish with “team SIU.”

Pinkert said in addition to the 40,000 graduates in the Chicagoland area, the university needs to improve its contact with other places heavily populated by alumni. Those include the 5,500 SIU graduates in Los Angeles and the 1,800 each in Dallas, southern Florida and Nashville, Tennessee.

There are 225,000 living alumni that do not engage in activities on campus, Pinkert said. He also wants to reach out to international alumni, saying there’s no alumni constituent groups in other countries.

“There are a number of elements for progress,” he said. “A lot of these things are already in place, particularly the people and dedication to this university. That’s something that’s really exciting to me.”

Julie Partridge, associate professor of kinesiology, asked Pinkert how he would he lead the university in this “unprecedented financial crisis.” In response, Pinkert said the campus must prepare by creating contingency plans.

“Building from where we are right now will be critical,” he said.

Pinkert said he wants to use the change in state support as a way to remodel the campus to make up for the financial issues at hand. He referenced Alabama’s “out of the box thinking” of increasing out-of-state recruitment in order to compensate its nearly half a billion dollar loss in state funding since 2007.

“With those kind of cutbacks and those kinds of losses, you are really going to be hurting,” he said. “What sorts of things can you at least decrease the bleeding [with]?”

If appointed chancellor, Pinkert will likely be tasked with making large budget reductions.

In late March, SIU President Randy Dunn announced his plan for the Carbondale campus to cut at least $30 million in spending from its $450 million budget. Shortly after the announcement, interim Chancellor Brad Colwell, who is also a finalist for the full-time position, said the changes at the university “will be challenging and painful” and “almost certainly include layoffs.”

Judy Davie, president of the Faculty Senate, asked how Pinkert thinks the university would realistically look five to 10 years from now.

Pinkert said he sees signature programs, at least one in every college or school, that make that college a “destination” for future students.

As for student life, Pinkert wants Saluki Athletics to help with recruitment and allow students to be a “part of a family.”

“That’s all possible, but we have to start having that sense of opportunity, inclusion and the quality education that will propel our students to that next level wherever they want to go,” he said.

Johnathan Flowers, who will take over as president of the Graduate and Professional Student Council next year, asked about Pinkert’s plans to further promote diversity and inclusivity on campus.

Pinkert said diversity and inclusivity must be a priority.

“Our overall productivity and that sense of community can be that much greater by having a diverse and inclusive campus overall,” he said. “It needs to be front and center in decision-making as we move ahead.”

He said when looking at student enrollment metrics, the campus is “ahead of the curve in higher education when it comes to diversity and inclusion numbers. When it comes to faculty, not so much.”

Pinkert also said his goal is to have an “interactive transparent way of doing business with a sense that I’d want a diverse, student-centered, research institution.”

Ben Handler, executive vice president of Undergraduate Student Government, asked Pinkert how he is uniquely qualified to lead the campus.

Pinkert said his leadership positions at Auburn University and the University of Alabama span across all the disciplines at SIU. This has exposed him to interacting with different groups of people, giving him hands-on experience for strategic planning for different academic interests.

At Alabama, his duties include advancing research goals and expanding the university’s research funding base through federal grants, foundations and private donations, according to his curriculum vitae.

Pinkert has also helped further expand a partnership between his university and NASA. In November, he signed an agreement that allows students to work with “applied research ultimately used by NASA, which is a win-win for all sides,” he said, according to a news release from the Alabama Department of Commerce.

He has helped form partnerships with his university and numerous entrepreneurs and researchers. In one instance in July 2015, Pinkert formalized an agreement between Alabama and TDK Corp., a Japanese electronics giant, that focused the challenges “associated with the growing electric-energy movement and the miniaturization of electronic components,” the university said.

Throughout his research career, according to an Alabama news release, Pinkert led or co-led projects that have received more than $23 million in funding.

In his previous role as associate vice president for research and graduate studies at Auburn University, Pinkert oversaw a $19 million annual budget — about 4 percent of SIUC’s operating budget. He worked as a professor and administrator at the public research university in Alabama from 2006 until 2013.

He attended Colorado State University for his undergraduate degree and went to the University of Georgia for a doctorate in animal science and reproductive physiology.

Colwell and George Hynd, president of Oakland University in Rochester, Michigan and Carl Pinkert, are also vying for the permanent chancellor spot. Jeff Elwell, dean of the College of Arts and Sciences at the University of Tennessee at Chattanooga, dropped out of the running last week after being offered the president position at Eastern New Mexico University.

As for Pinkert, he said he is not just looking for a chancellor position at any university.
“At the end of the day, it is about the institution and people working together to really lift one another up to the next level,” he said. “That’s something I believe in very strongly and see as a critical need for this campus at this time.”

There will be a student-led forum from 5 to 6 p.m. Thursday in the Student Services Building room 150/160. The event is open to the public.