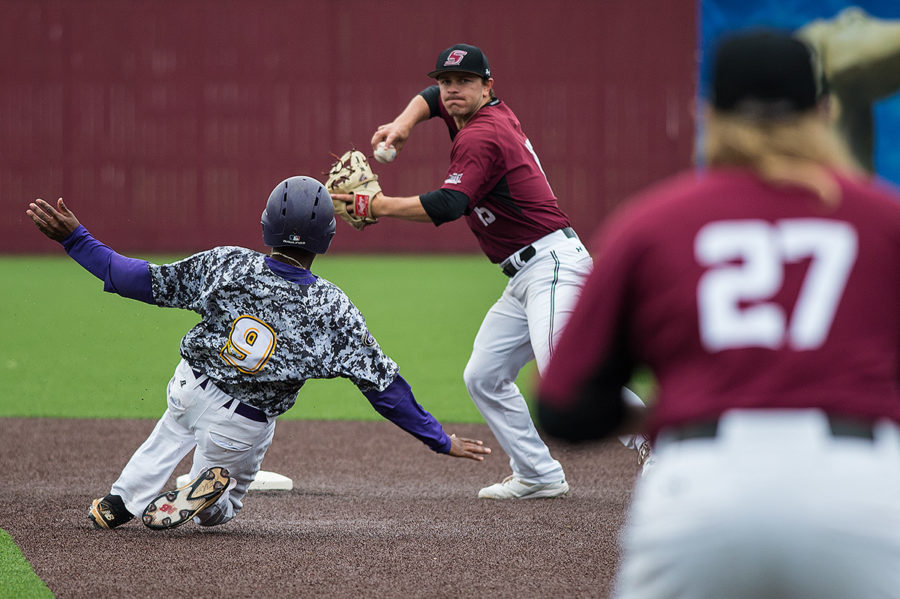 SIU baseball rallied from two runs down in the bottom of the ninth inning to win game two of a weather-adjusted doubleheader, completing the Saturday sweep of No. 26 Tennessee Tech and clinching a series win.

With continuous rains Friday, the start of the three-game series against Tennessee Tech was rescheduled for two games Saturday.

Senior starting pitcher Chad Whitmer took the mound for the Salukis in game one.

Coming off his spectacular start against Indiana State last weekend that earned him MVC Pitcher of the Week honors, Whitmer faced off against a stout offensive squad in Tennessee Tech that ranked second nationally in runs and hits, and third in scoring (8.7 runs per game) coming into today’s match-up.

Whitmer worked through a solid 7.1 innings against the Golden Eagles, allowing four runs (two earned) on nine hits and one walk while striking out six batters to preserve an early Saluki lead.

Southern took the lead in the bottom of the third after senior right fielder Ryan Smith worked a two-out walk and scored on junior first baseman Greg Lambert’s triple to right field. Lambert scored on a wild pitch to give the Salukis a 2-1 lead.

Junior pitcher Ryan Netemeyer came in to close things out for Southern in the top of the ninth, retiring the side to complete the 6-4 win and earn his 12th save of the season.

Following a 45 minute break to finalize lineups and loosen up pitchers, junior starting pitcher Michael Baird was ready to toe the rubber for the Salukis in game two.

His struggles continued against the Golden Eagles, allowing nine runs (eight earned) on eleven hits and one walk while striking out one through 4.2 innings Saturday.

“He’s almost normal on the mound right now, and when Michael Baird’s right he’s not normal,” Henderson said. “He’s just not hitting spots right now, but he’s certainly capable of turning things around the next time out.”

Southern kept pace with Tennessee Tech’s scoring throughout the game.

The Salukis moved ahead in the bottom of the third when Smith, junior catcher Nick Hutchins and senior right fielder Jake Hand all scored to give Southern a 4-3 lead.

Tennessee Tech took the lead back in the top of the fourth inning 5-4, but SIU tied it up in the bottom half of the inning when senior third baseman Ryan Sabo scored to make it a 5-5 game.

The Golden Eagles took a commanding lead in the top of the fifth inning with four runs against Baird to make it a 9-5 affair.

But senior pitcher Austin McPheron came into the game in relief of Baird and shut down Tennessee Tech over the final 4.1 innings of Saturday’s second game by keeping the Golden Eagles from scoring any runs while scattering three hits, walking one and striking out two batters.

“He did a phenomenal job,” Henderson said. “For McPheron to come in and throw up zeroes and give our offense a chance, that’s what you gotta do out of the bullpen.”

With McPheron holding the Golden Eagles at bay, the Salukis scored two runs in the bottom of the seventh inning to cut into Tennessee Tech’s lead 9-7.

In the bottom of the ninth, Lambert started a two-out rally with a single to left field. Junior first baseman Logan Blackfan came a couple feet short of tying the game with a deep double off the left-center field wall that scored Lambert to make it 9-8.

With senior Dyllin Mucha in at second base pinch running for Blackfan, Hutchins singled to left-center to push Mucha across and tie the game 9-9.

Hand came to the plate and roped the first pitch he saw past the third baseman and on down the left field line all the way to the wall, scoring Hutchins from first base just ahead of the relay throw home to complete the two-out rally and 10-9 win for Southern.

“I’m proud of them because they battled all day,” Henderson said. “It’s probably the best we’ve competed in a long, long time. They didn’t quit. They kept battling and stayed right at it, and it’s great to see them rewarded for it.”

Whitmer recorded his second quality start in a row, earning back-to-back wins for the first time this season — and third win over his last four starts — to move his 2017 record to 4-3.

Freshman left fielder Addison Fugitt batted .571 (4-for-7) through both games of Saturday’s doubleheader, with two runs scored, two RBI’s and a stolen base.

Lambert batted .555 (5-for-9) through both games of Saturday’s doubleheader, recording a double and a triple to go along with two runs scored and three RBI’s.

Smith batted .500 (4-for-8) through both games of Saturday’s doubleheader, recording a double and a walk to go along with four runs scored and two stolen bases.

After sitting out the first game, Hand started the second game of Saturday’s doubleheader and batted .600 (3-for-5) with two runs scored and two RBI’s — one of which came on his game-winning RBI double in the bottom of the ninth inning.

Netemeyer worked a perfect ninth inning in the first game of Saturday’s doubleheader, throwing 11 of his 12 pitches for strikes to earn his 12th save of the season.

SIU (20-20, 5-4 MVC) will complete its three-game series against non-conference opponent Tennessee Tech (30-11) with the final game at 1 p.m. Sunday at Itchy Jones Stadium. Senior starting pitcher Joey Marciano will take the mound in hopes of securing a series sweep of the Golden Eagles for the Salukis.