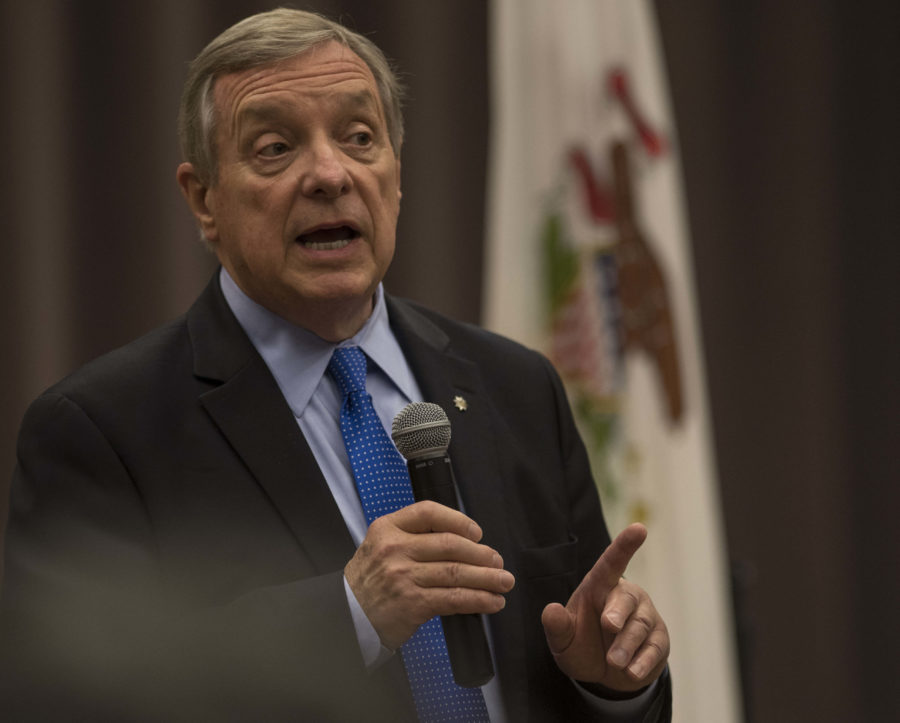 U.S. Sen. Dick Durbin visited the university for a town hall meeting Friday evening that focused on questions of national and regional concern and at points conjured laughs and applause from the audience.

About 140 people gathered in the university’s Lesar Law Building as the senator spoke on national, state and regional issues. Questions were varied, but common areas of concern included the environment, health care, defense spending and the Illinois budget impasse.

Before drawing questions from the audience, the senator recapped an earlier meeting with Carbondale Mayor Mike Henry, SIU President Randy Dunn and area transportation officials to discuss the federal government’s proposal to cut Amtrak services around the country. One of the routes on the chopping block under President Donald Trump’s budget would be the train line that runs from Chicago to New Orleans, which is often used by SIU students and marketed as a selling point for the university to parents.

“The suggestion that they are going to eliminate long train Amtrak service across the United States really hits Illinois hard — hits downstate harder than any part of the state and especially hurts our university communities like Carbondale,” he said.

While much of the evening was devoted to Durbin’s role in the U.S. Senate, he also spoke of challenges for SIU following recent budget cuts as a byproduct of the state’s inability to pass a budget. The senator said it is “absolutely devastating” the state has gone on without a budget for nearly two years, calling it “a self-imposed recession” that “hits university communities the hardest downstate.”

Durbin’s visit comes as the nation is divided over the issue of how the federal government should be involved with health care. House Republicans in March failed to pass a partisan health care replacement — nicknamed RINO-Care and Obamacare Lite by some in Congress. The failed attempt marked an early defeat for House Speaker Paul Ryan despite a Republican majority in the House.

Citing reports that the Affordable Care Act has reduced the number of uninsured persons in the country by half, Durbin said the health care provisions under what is commonly known as Obamacare are proven to work. He also criticized attempts to get rid of it without a viable replacement, calling it one of the most important pieces of legislation he has supported during his 20 years in the Senate.

“I don’t believe health care is a privilege — I believe it’s a right,” Durbin said.

Concerns from members of the audience were varied and gravitated around both state and federal policy issues, often remaining critical of Gov. Bruce Rauner and the president.

Addressing a question about climate change, the senator criticized the Trump administration and Environmental Protection Agency Administrator Scott Pruitt for recent federal cutbacks to the EPA.

“Count me with 98 percent of scientists in the world who believe that climate change is a reality and something our generation ought to take seriously so our kids and grandkids can have a planet worth living on,” Durbin said.

One of those who brought local concerns was Diane Hood, a board member of The Women’s Center, a resource center that provides help for victims of sexual and domestic abuse. Hood said she is concerned the federal budget will provide no support for domestic abuse victims or resource centers like hers.

“What I need from you is an assurance that you are going to support us in every way that you can, because we need you,” she said.

Also brought up was the recent announcement from Dr. Ben Carson, Trump’s pick to lead the U.S. Department of Housing and Urban Development, that the Alexander County Public Housing Authority would shut down a housing project in the southern Illinois city of Cairo. The housing project was the subject of a long term investigation that found unlivable conditions for the residents.

Durbin said he has started working on several, one of which would provide housing vouchers for those displaced by the destruction of the apartments. A housing survey is underway to find livable housing for residents who wish to remain in the city, he said.

“My goal is to find as many places in Cairo for people to stay that are better than where they’re living right now in these terrible housing projects,” Durbin said.

One of the members took his time to ask what he called “a personal question” of the senator.

“Have you considered the possibility of running for governor?” he said, as other attendees laughed and clapped.

“Thank you, but I like what I’m doing and I hope I’m getting better at it because I keep trying,” the senator said.