‘My job as chancellor is to be a cheerleader for the university’: Hynd makes case for chancellor spot 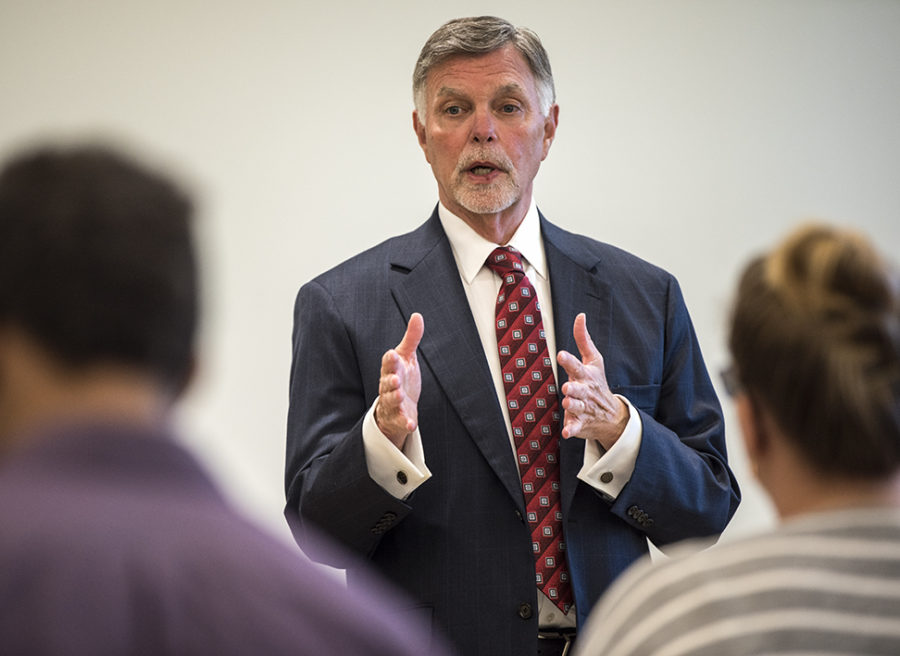 From a young age, George Hynd has been exposed to different cultures and diverse groups of people.

Because his father was a career military officer, Hynd lived in Italy, Hawaii and southern California throughout his adolescence and young adulthood. Now Hynd is vying to become chancellor at SIU’s largest campus, which in 2016 had a 29 percent minority population, according to university data.

“My first memory is being in a multicultural environment,” Hynd said. “That was important in framing who I am.”

During a Wednesday morning forum, Hynd outlined his plans to lead the university’s “reemergence from its fiscal tsunami,” a metaphor he said is overused but apt.

“A tsunami is caused by something external,” Hynd said, referring to the state budget impasse. “It comes, it destroys — but then it recedes and rebuilding takes place.”

George Hynd has been president of Oakland University in Rochester, Michigan since 2014. There he has been seeking and allocating resources to support research, expanding efforts to create an increasingly diverse faculty and establishing “fiscal and budgetary systems that are comprehensive and transparent,” according to his curriculum vitae.

The state-funded university consists of more than 20,000 students. Hynd’s contract with Oakland University ends Aug. 14, and the university chose not to renew it. He makes $400,000 a year as its president.

Many of Hynd’s ideas hinged on recruitment and retention efforts. He said increasing endeavors to diversify the student population and improving access to the university are vital for raising enrollment, which hit its lowest point since 1965 in the fall 2016 semester.

Hynd said he would be personally involved in the process, visiting “feeder schools” in Chicago and central Illinois and working with U.S. embassies to increase SIU’s international student population.

“Revisioning the mission of SIU is critical,” Hynd said. “What is it about this institution that makes mothers and fathers want to send their students here?”

Retention efforts are just as important as recruitment, Hynd said, and the university should be open to “out of the box” ideas.

“We have to convey to students that if they come here, they are going to be able to finish an academic degree,” Hynd said. “These are huge issues for the campus.”

Brandon Woudenberg, president of the Graduate and Professional Student Council, asked how Hynd would take student views into consideration during decision-making processes.

“Is this assuming they’re not already?” Hynd asked. “We’re here for the students — if you put a bullseye up there about what a university is all about, the students should be right in the center.”

Hynd said he meets with the Oakland University student government on a monthly basis, which is something he wants to continue at SIU.

“From what I’ve read, there is student representation here,” Hynd said. “But I’m not sure representation means there is a voice that’s respected in a way the students feel it should be.”

Asked how he would guide the university through the unprecedented financial crisis, Hynd said collaboration between administration, the board of trustees, students, faculty and staff is critical.

“The conversation needs to start with all of the constituents,” Hynd said. “We need your ideas; institutions are all about shared governance, because you are all participants in the mission of this university.”

“This institution is probably going to stabilize between 14,000 and 16,000 students,” Hynd said. “If that’s the case, I think we all need to accept the fact that this is going to be a different university in the next five or 10 years.”

Hynd said there should be a conversation about what programs will be “gems in the crown” and what smaller programs will contribute to SIU’s mission.

Graduate Council chairman Tomas Velasco asked what Hynd would do as chancellor to contribute to student success on campus.

Hynd said he would work with the provost, faculty and deans to define what student success should look like and what programs students find attractive.

“When students come to the institution, often they don’t know what they really want to do,” Hynd said. “Helping students find their passion is paramount, because the average student changes their major two or three times; we need to be intrusive in that first year.”

The search for a permanent chancellor comes during a financially difficult time for the state and university.

For nearly two years, Republican Gov. Bruce Rauner and Democrats who control the state Legislature, including House Speaker Michael Madigan, have not been able to pass a state spending plan. This has left public institutions reeling.

Hynd is the only candidate who has not attended or previously worked for SIU. He holds bachelor’s and master’s degrees in psychology from Pepperdine University in California and a doctoral degree in education from the University of Northern Colorado.

Interim Chancellor Brad Colwell and Carl Pinkert, vice president for research and economic development at the University of Alabama, are also vying for the spot. Pinkert earned his master’s degree in animal science from SIU in 1977.

Jeff Elwell, dean of the College of Arts and Sciences at the University of Tennessee at Chattanooga, dropped out of the running last week after being offered the president position at Eastern New Mexico University.

The next chancellor will likely be tasked with making large reductions. In late March, SIU President Randy Dunn announced his plan for the Carbondale campus to cut at least $30 million in spending from its $450 million budget. Shortly after the announcement, interim Chancellor Brad Colwell, who is also a finalist for the full-time position, said the changes at the university “will be challenging and painful” and “almost certainly include layoffs.”

From 2010 to 2014, Hynd worked as provost and executive vice president of academic affairs at the College of Charleston. He managed an academic affairs budget of nearly $90 million, according to an online biography. He was also a professor in the university’s department of psychology.

Before then, he worked for two years as senior vice provost and dean of the Mary Lou Fulton College of Education at Arizona State University. There, he managed an annual budget of $20 million.

Grant Miller, representing the SIU Faculty Senate, asked what the chancellor’s role should be in boosting employee morale during a time when many are worried about their job security.

Hynd said the key is being accessible, visible and communicating with the campus community.

“My job as chancellor is to be a cheerleader for the university and remind everyone of the good things that are happening at the institution,” Hynd said. “It’s not all about fixing the budget.”