‘The students are why I’m here’: SIU alumnus makes case for chancellor spot 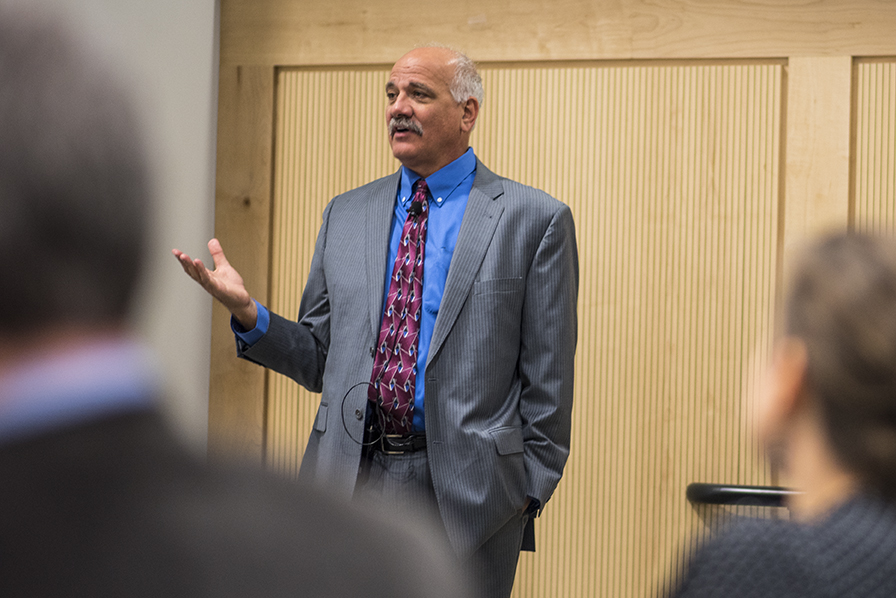 Jeff Elwell, a finalist for the university's chancellor position, speaks during a public forum Tuesday, April 11, 2017, in Guyon Auditorium. Elwell, who is one of four finalists for the position, serves as the dean of the College of Arts and Sciences at the University of Tennessee at Chattanooga. (Branda MItchell | @branda_mitchell)

By Olivia Spiers and Luke Nozicka

In high school, his grades fell below average. Teachers told him he would never be admitted to his dream college. Now, decades later, Elwell holds four degrees, and is vying to become chancellor at SIU’s largest campus.

During a Tuesday morning forum, Elwell outlined his plan to combat the university’s budget crisis. As dean of the College of Arts and Sciences at the University of Tennessee at Chattanooga, he has managed and reduced a budget, and said if appointed chancellor, his first priority for fighting SIU’s cuts would be to “maintain an inclusive, university-wide process.”

When reducing a budget, he said, eliminating faculty positions is not effective because cutting teaching positions harms the programs that catch prospective students’ attention.

“The students are why I’m here,” said Elwell, adding that laying off a “living, breathing faculty member doesn’t help them.”

If he becomes chancellor, Elwell said smaller programs that aren’t vital to the university would see the largest cuts. One example would be the journalism school, which has “decreased significantly over the years,” he said.

In Chattanooga, Elwell is in charge of a $29 million state budget and a $13 million private budget, less than 10 percent of the SIU budget. He oversees 17 departments with 275 full-time faculty and 205 part-time faculty, according to his curriculum vitae.

Elwell said although he does not have experience dealing with massive cuts like the ones proposed by SIU’s administration, he understands the financial problems colleges are facing nationwide. In fall 2014, Elwell was tasked with reducing his college’s budget by roughly $1.2 million. As a result, no faculty or staff positions were reduced and no programs were eliminated, he said.

If appointed chancellor, Elwell will likely be tasked with making much larger reductions. In late March, SIU President Randy Dunn announced his plan for the Carbondale campus to cut at least $30 million in spending from its $450 million budget. Shortly after the announcement, interim Chancellor Brad Colwell, who is also a finalist for the full-time position, said the changes at the university “will be challenging and painful” and “almost certainly include layoffs.”

Asked about the state’s historic budget impasse, Elwell said Colwell’s plan to leave 158 vacant positions unfilled will not significantly benefit the university. The chancellor’s office has said that plan will make up $10 million of the $30 million to “minimize the number of layoffs.”

The candidate described Illinois higher education as being in “a tremendously difficult situation.” For research institutions, he said, the situation is almost unprecedented.

“Right now higher education is in an economic tsunami,” he said. “And unfortunately, SIU is at the top of it.”

As part of his plan to alleviate budget cuts, Elwell said he would aggressively pursue out-of-state recruitment. He said the university should showcase its various programs and diversity among students for that purpose.

Elwell said SIU is unique because students come from nearly 100 countries to study on campus. However, he said he was surprised the four chancellor finalists chosen to represent that diversity were “older, white males.” Although he is not a minority, Elwell said he understands how to highlight SIU’s strong suits because he is an alumnus.

One characteristic Elwell said the university needs to better emphasize is its low tuition. Though the tuition is double what it was when he was a student,  he said it is still cheaper than other universities.

Elwell has interviewed for several other higher education positions in recent years.

As of March, he was still being considered for the presidential position at Eastern New Mexico University, according to a university news release. Candidates interviewed on campus for the position earlier this month, and the university’s Board of Regents plans to announce the selected candidate or before April 17.

In May 2016, Elwell was one of three finalists for the chancellor position at the University of South Carolina Upstate in Spartanburg, South Carolina.

In spring 2015, he was a finalist for the presidential position at Winthrop University. At the time, Elwell’s son studied political science on a track scholarship for javelin throwing at the Rock Hill, South Carolina university, the Rock Hill Herald reported.

Before starting at Tennessee in 2012, Elwell served as special assistant to the chancellor for strategic initiatives at Auburn University at Montgomery. From June 2010 to October 2011, he worked as the provost over the university’s 5,800-students. He also served as dean of graduate studies.

Elwell earned his doctorate in speech communication and theatre from SIUC in 1986 and teaches playwriting at his current job. Some of his more than 50 plays have been performed in New York, Chicago and Los Angeles. If he gets the job at SIUC, Elwell said he wants to connect with students through teaching.

Elwell said he has “skin in the game” at SIU.

“I met my wife here and was a part of SIU’s golden era,” he said. “Many people might think I’m crazy for coming back, but I have very fond memories here.”