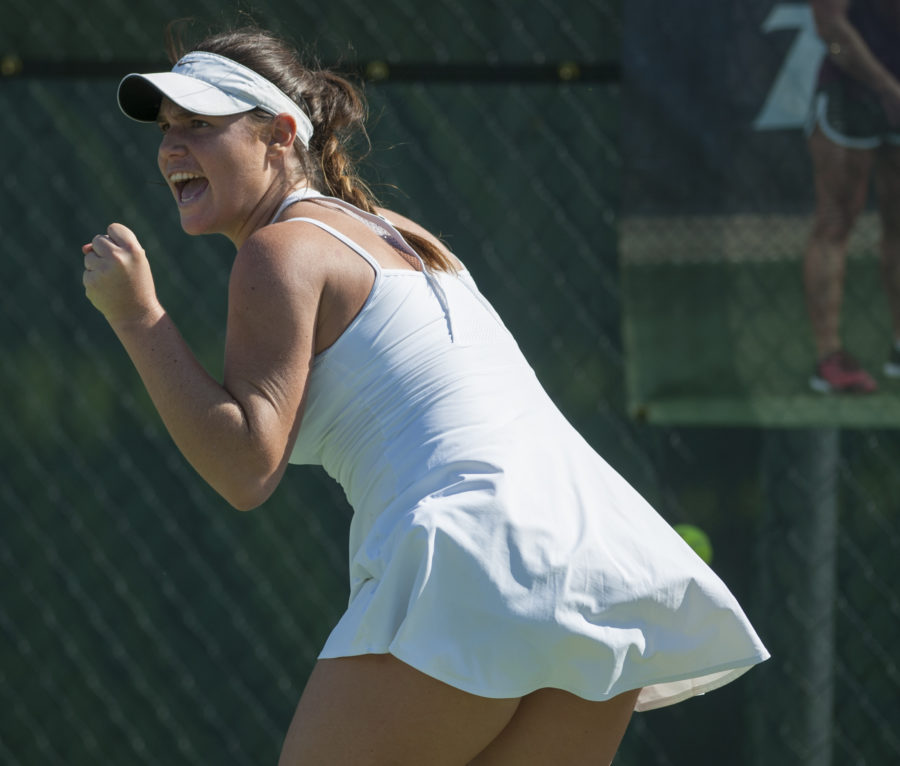 Senior Ana Sofia Cordero reacts to winning a point during her singles match against Redbird freshman Jelena Karla Vujicic on Saturday, April 8, 2017, at the University Courts. Cordero lost the match, but the Salukis beat Illinois State by an overall score of 4-3. (Bill Lukitsch | @lukitsbill)

With their sixth player out, the Salukis only needed to win one doubles to clinch the doubles point.

Heading into singles play, SIU was at a 2-0 lead, with number 6 singles being forfeited by Illinois State.

Coach Audra Anderson said she was proud of her team and saw a shift in preparedness for the matchup against ISU.

“Today was much better than last week,” she said. “We were mentally more ready for it and Illinois State was going at it every single point and we had to do that in order to beat them.”

At this point in the season, Anderson said the team has been focusing on more than just physical preparation.

“We try to give them drills that involve mental toughness,” she said. “Everything is goal oriented, not just going out there and hitting and just playing sets for no reason — there is always a reason.”

The matchup against ISU was important for more than just the Salukis’ conference rankings.

“We tried to do this match and dedicate it to Meagan’s dad,” she said. “She lost her dad to cancer last year so we are trying to raise a little bit of money for the family account, or the family team to donate to American Cancer Society.”

Senior Meagan Monaghan said she was touched by her team trying to do this in honor of someone important to her and her passion for tennis.

“I’m so grateful and it meant so much to me because he was a big part of the reason I started playing this sport,” Monaghan said. “Today I really want to go out there and play for him but a big thing I wanted to do was go out and have fun on the court because that is what he would have done.”

Around $40 were raised during today’s match and the donation box will be out again during Sunday’s match.

“I’m really proud of the girls because we won and it’s hard to play in a conference when you are 0-2, so it’s a win for our team so that’s always good,” said senior Polina Dozortseva. “I think this is the best I have been playing in my last four years so far … I was coming back from an injury so this is a good season for me and the team as well.”

“Illinois State has some really good players — they are always a team to watch out for,” Anderson said. “But they are a little bit banged up; you saw five players instead of six and Bradley is going to come with six players. They are going to be steady all the way down to the next player. The makeup is going to be a little bit different.”