Immigrant fears and stories are shared at local forum 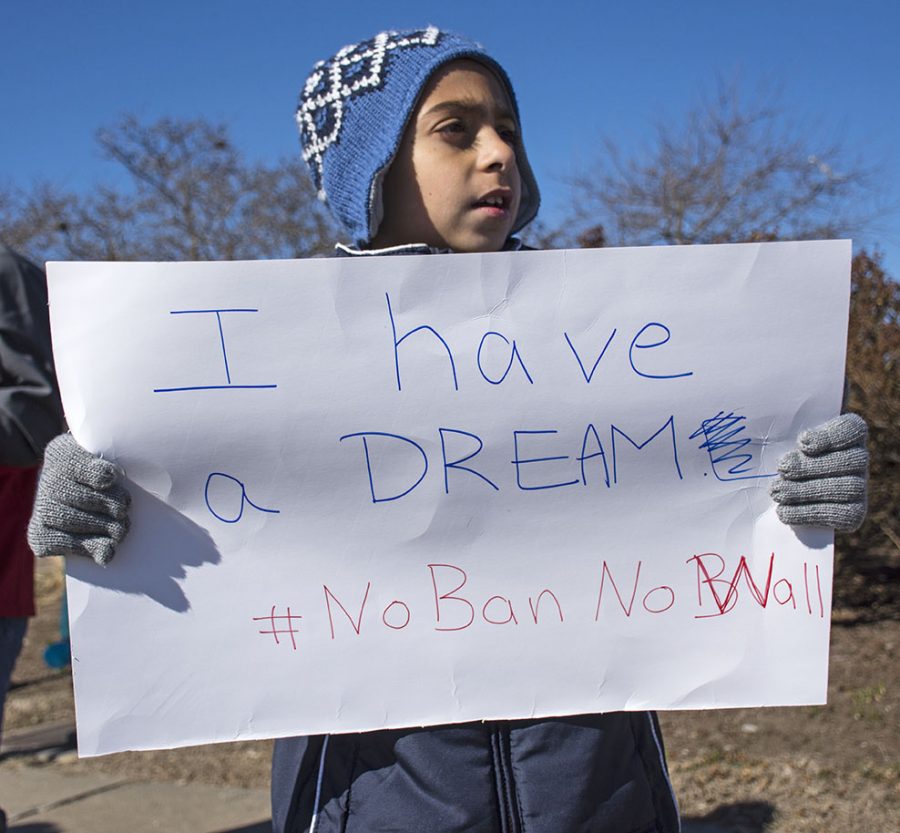 Alihadi Srour, 8, of Carbondale, holds a sign during the Peace Coalition of Southern Illinois monthly vigil Saturday, Feb. 4, 2017, on East Main Street. Srour was born in the United States and his mother, Nour Srour, was born in Lebanon. Nour believes President Donald Trump uses language that separates people based on their religion instead of uniting them. “I witnessed four wars when I was growing up and I don't want my kids to see that horror in their life, no matter where they are living,” Nour said. “I don't want them to grow up and feel scared to show who they are or where they are from.” (Athena Chrysanthou | @Chrysant1Athena)

Oneida Vargas was 1 year old when she was carried across the Mexican border with her mother and 3-month-old brother in search of a better life in Chicago.

“Growing up was hard; I didn’t understand what it all meant,” said Vargas, a junior studying political science. “I had to translate bills and IRS papers at the age of eight, when I could barely read.”

Vargas said her status as an illegal immigrant put many opportunities out of her grasp as she got older.

“Once, I was asked for my social security while trying to apply for a high school program, but my mom told me we didn’t have one,” Vargas said.

After doing an extensive internet searching she came to realize the full implication of her identity as she approached college.

“I was illegal,” Vargas said. “For me this meant that going to college would be a lot harder.”

Vargas told her story to a hushed audience Thursday night at an immigration forum held at at the Center for Empowerment and Justice as a part of Carbondale’s 11 Days for Compassion. The forum attracted about 40 attendees from the city and nearby towns to reach out to immigrant community members in hopes of addressing their fears and concerns.

“We really wanted to build community education on what our immigrants are facing right now in the current political climate,” event organizer Jess Jobe said. “Carbondale, being a welcoming safe place for everyone, is part of building a compassionate community.”

Experts in immigration law and policy spoke at the event to better inform immigrants of their rights and teach community members the realities of immigrant life.

Jobe said she believes this misinformation comes from the government, which causes people to question “what illegal immigrants are doing in the country.”

Provost Susan Ford assured event organizers that campus police were not looking to turn students over to the Immigration and Customs Enforcement, so people would feel free to share their experiences and learn from legal experts

Cindy Buys, a law professor at the university, said the immigration agency has been surveying ethnic restaurants in the area in search of illegal immigrants.

“Restaurant raids seem to be a primary way that ICE is detecting undocumented immigrants,” Buys said.

With recent citings of ICE in Jackson County, Carbondale residents, led by the Southern Illinois Immigrant Rights Project, have proposed a city ordinance to have Carbondale become a sanctuary jurisdiction.

“The ordinance would bar city officials from asking about immigration status, or to use immigration status to detain someone,” said Becca Tally one of the event organizers. She said a petition will be presented Tuesday at the city council meeting.

There was a request from graduate students at the end of last semester that the campus be declared a sanctuary campus, which was declined by administration. This led to many immigrant students, especially those undocumented, to feel as though they lacked school support on the matter, said Ana Hernandez, a senior studying social work.

The administration, Buys said, declined to agree to the declaration after the school received calls from alumni stating that they would pull their financial support if that happened.

This led to many immigrant students, especially those undocumented, to feel as though they lacked school support on the matter.

“Being six hours away from my family knowing that anything could happen,” Hernandez said. “I didn’t feel like the school gave us this kind of support.”

Even though she feels the university isn’t showing enough support, Hernandez, who is a first generation legal immigrant, said the community support at the forum was overwhelming.

“Hearing other people’s stories and getting different perspectives was really helpful,” she said.