Gorsuch’s confirmation puts the Trump brand on the Supreme Court, perhaps for decades 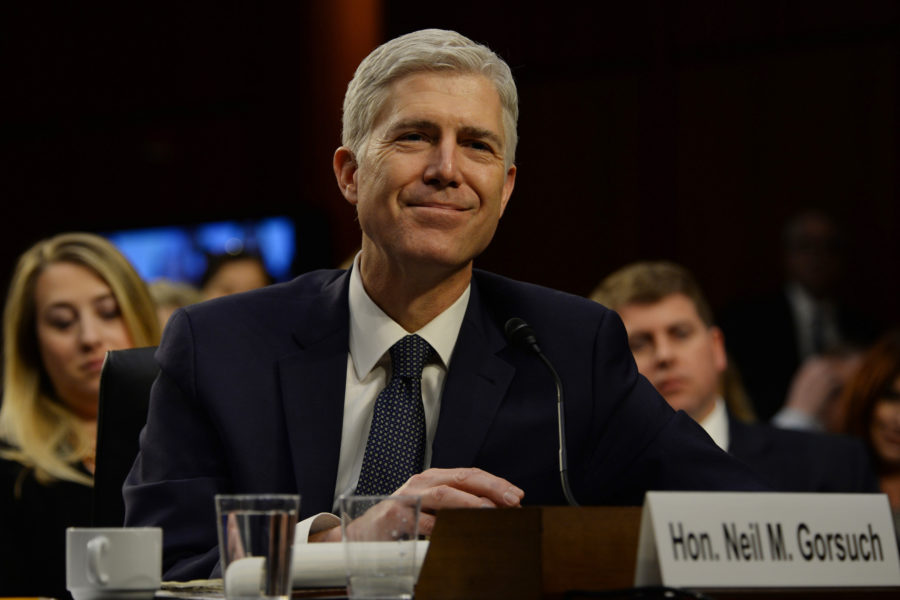 Judge Neil Gorsuch goes through his confirmation hearing by the Senate Judiciary Committee to see if he will be the next U.S. Supreme Court Justice on March 22, 2017 in Washington, D.C. (Christy Bowe/Globe Photos/Zuma Press/TNS)

The Senate on Friday confirmed Judge Neil Gorsuch to the Supreme Court by a largely party-line 54-45 vote, setting the stage for President Donald Trump’s 49-year-old nominee to shape U.S. law for decades to come.

Even before he’s sworn in, Gorsuch’s nomination has altered the course of judicial history, as Senate Republicans changed the rules to get him across the finish line. Once on the job, Gorsuch is expected to keep the nine-member court tilted in the same conservative direction it leaned under his predecessor, the late Justice Antonin Scalia.

If he matches Scalia’s judicial longevity, Gorsuch could be on the bench through roughly the year 2047 or beyond.

“A nominee’s decisions will affect the lives of all Americans for generations,” noted Sen. Dianne Feinstein of California, the senior Democrat on the Senate Judiciary Committee.

Three red-state Democrats joined 51 Republicans on Friday in supporting Gorsuch, with Georgia Republican Sen. Johnny Isakson absent. The margin was the closest on a Supreme Court confirmation since 1991, when Justice Clarence Thomas succeeded on a 52-48 vote.

Gorsuch’s confirmation vote occurred after GOP lawmakers on Thursday changed Senate rules to overcome a first-of-its-kind Democratic filibuster. Now only 51 votes are needed to cut off endless debate on Supreme Court nominees, instead of the previous 60.

The Republicans followed the lead of Senate Democrats, who had watered down the filibuster in 2013 for Cabinet and lower-level judicial nominees in response to GOP confirmation obstructions.

“It will have an effect on the judiciary, and it won’t be a good one, because in the future judges will be selected by a single party,” predicted Sen. Lindsey Graham, R-S.C., adding that there will be “no requirement to reach across the aisle.”

“I don’t think it takes a crystal ball to forecast the outcome of the Friedrichs decision, when it comes back up to the court with a fifth Republican justice,” said Sen. Sheldon Whitehouse, D-R.I.

The court last year also tied 4-4 on a challenge to the Obama administration’s policy of protecting from deportation certain immigrants who are in the U.S. illegally — among several other deadlocks — and the justices seemed to avoid taking up some other hot-button controversies that now might come roaring back.

A Colorado native educated at Columbia, Harvard Law School and Oxford, Gorsuch was previously confirmed by voice vote in 2006 to serve on the Denver-based 10th U.S. Circuit Court of Appeals. Since then, he has participated in some 2,700 federal cases arising from the states of Oklahoma, Kansas, New Mexico, Colorado, Wyoming and Utah.

Gorsuch’s past appellate court decisions, speeches and writings, and his support from groups like the Federalist Society cast him as a conservative somewhat in Scalia’s mold, though he says he’s independent and he has yet to rule directly on some difficult issues such as a woman’s right to an abortion.

“I have no difficulty ruling against or for any party, other than based on what the law and the facts and the particular case require,” Gorsuch told the Senate Judiciary Committee, adding that “that there’s no such thing as a Republican judge or a Democratic judge. We just have judges in this country.”

First, Gorsuch will have to quickly staff up with the four clerks allotted each justice. With the temporary assistance of other justices’ clerks, he’s likely to participate in the court’s private conference next Thursday, when justices will decide which cases they want to hear. At least four justices must agree for a case to be accepted.

At that conference, as the junior justice, Gorsuch will undertake such rudimentary duties as sending for reference materials. He will sit at the far end of the same conference table as Justice Anthony Kennedy, the 80-year-old California native for whom he once clerked and whose potential retirement plans now draw intense scrutiny.

Among the petitions that Gorsuch and his new colleagues could face at the Thursday conference is a closely watched challenge brought by a self-described “cake artist” named Jack C. Phillips who was charged with sexual orientation discrimination by the Colorado Civil Rights Commission.

“He declined to design and create a custom cake honoring a same-sex marriage because doing so conflicts with his sincerely held religious beliefs,” Phillips’ petition states.

Gorsuch’s first public appearance on the bench could come at 10 a.m. April 17, when the high court will consider a highly technical question of which lower court has jurisdiction over a former U.S. Census Bureau worker who says he was wrongfully terminated.

All told, the court has 13 remaining cases set for oral argument between April 17 and April 26, the end of the argument season for the term that began last October. Some of these cases will expose Gorsuch to vivid life-and-death issues, such as a challenge from an Alabama death row inmate who was denied the opportunity to present evidence that he suffered from neuropsychological problems.