SIU unable to overcome early deficit in loss to EIU 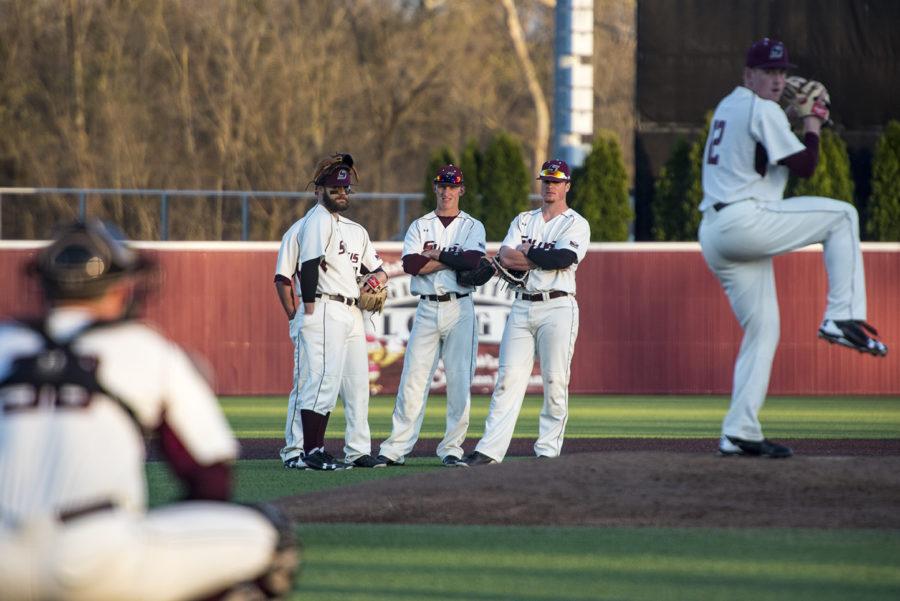 Southern rallied for six runs over its last four innings, but fell short in the ninth to lose to Eastern Illinois 10-7 Wednesday afternoon.

Freshman pitcher Brad Harrison made his first career start for the Salukis. He received a rude welcome when Eastern capitalized on early walks and took a 4-0 lead on a grand slam off the bat of their junior first baseman Matt Albert.

Harrison surrendered two more runs to Eastern in the bottom of the second to round out his day. He finished his first career start with 2.0 innings, allowing six runs (five earned) on four hits while walking two and striking out one.

SIU (12-14) put its first run on the board in the top of the third when senior center fielder Ryan Smith scored on senior shortstop Will Farmer’s fielder’s choice ground ball to make it 6-1.

Eastern (5-19) took a 9-1 lead in the bottom of the fourth on three straight hits, with two outs in the inning, pushing across three runs. One of those runs represented the lead-off batter in the inning, who reached on a hit-by-pitch.

Southern scored a run of its own with two outs in the top of the sixth.

The Salukis brought the game closer in the top of the seventh on junior left fielder Greg Lambert’s two-RBI single up the middle that scored Farmer and senior third baseman Ryan Sabo to move the score to 9-4.

Eastern added to its lead in the bottom of the seventh with one run to make it 10-4.

Southern answered right back with three runs in the top of the eighth on a two-RBI single by junior second baseman Connor Kopach and a sacrifice fly by Farmer that scored Sabo to close the gap 10-7.

The Salukis sent the potential game-tying run to the plate, with two outs in the top of the ninth, in pinch hitter junior Hunter Anderson with Smith on first and Blackfan on third.

Yet Anderson’s hard-hit ball up the middle was fielded cleanly by Eastern’s shortstop to end the game.

The 1-2-3 slots in the Saluki batting order accounted for six of the seven RBI’s in the game, with Kopach, Farmer and Lambert each driving in two on the afternoon.

Smith also had a productive day at the plate for Southern, going 3-for-5 with a double, one RBI and two runs scored.

The Salukis have Thursday off before beginning their first game of conference play this season with a match-up against Evansville Friday at Itchy Jones Stadium. First pitch is scheduled for 6:30 p.m. Every game of the three-game weekend series against Evansville will be broadcast live on ESPN3.