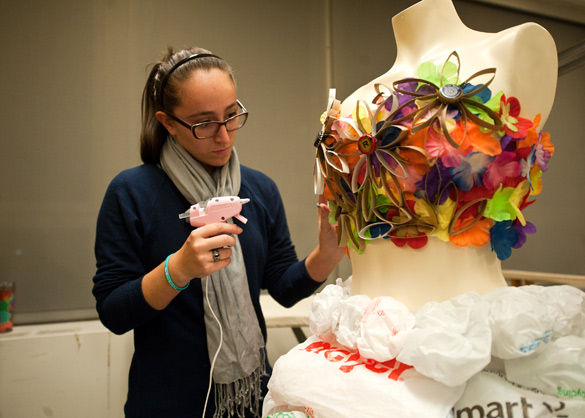 With hundreds of recycled supplies spread throughout its studio, the Fashion Design and Merchandising Registered Student Organization got its hands dirty to make “green” attire.

After working for the past six weeks, two designs were made by the group in honor of America Recycles Day on Friday.

Kris Schachel, sustainability coordinator, came up with the idea because she was looking for more opportunities to engage students in being more sustainable.

She said she was inspired by a documentary showed at the last sustainability event.

“I was looking at the trailer for the ‘Plastic Paradise’ documentary and it led to a company that has started to address the plastic-in-the-ocean problem by harvesting it and making it into denim,” Schachel said. “It brought up the idea of fashion.”

She said she brought the idea to Leslie Billing, the RSO president, and said Billing was thrilled about the idea.

“I understand the demands placed on students nowadays with so many competing priorities [so] I was pretty accepting of the group exploring ideas for the project,” Schachel said.

The RSO was split into two groups to work on separate designs for America Recycles Day.

“The garment went along with a carnival and circus inspiration, so we used the Sustainival as one of the inspirations,” Billing said.

The first mannequin is draped with plastic flowers across the chest with additional flowers made from toilet paper rolls and bottle caps. The bottom half of the garment has scrunched plastic bags in the form of a skirt.

The other mannequin was designed to be entirely green and was created with recycled objects.

“The other one, their inspiration was just going green in general, so they used basically anything green that they could find,” Billing said.

Using a variety of shades of green in old magazine cut-outs and cardboard in different shapes and forms, the second mannequin was designed to reflect the practicality of recycled goods.

“This is a small example of a way that students can create something, but it’s tied to bigger ideas about being conscious about the materials that we use and finding ways to repurpose things,” Schachel said.

Billing, a senior studying fashion design from Batavia, said this was the first time-consuming project for the RSO.

“In the beginning, I was a little nervous because a lot of the people are freshmen, so they are pretty shy and didn’t voice their opinion right away,” she said. “The biggest thing I didn’t want to do was to lead the group, I wanted it to be a team type thing.”

She said toward the end of the project, there were more ideas and opinions being stated, which improved the group dynamic.

“I want to get our name out there, and get us known,” Billings said. “I’m trying to do things with other groups so that more people would join in the following years after I leave.”

The RSO began last year with 30 to 40 people signing up, but by the end of the year the officers were the only people who were attended the meetings.

There are about 20 people who are consistently part of the group this year, Billings said.

“We aren’t just open to fashion students, we are open to everybody,” she said. “Anyone who interested in fashion at all in the designing aspect, drawing or learning about the history is welcome to come.”

Ashton Wilson, a senior studying animal science from St. Louis, said the project is really cool because it’s something the rest of the school gets to see and comment on.

Cristyn Farris, a junior studying fashion design and styling from Chicago, is the social media correspondent for the RSO and said being a part of the group is good experience for her career.

“I really like being able to do projects like this to show the rest of campus what we are doing,” Farris said. “There are a lot of people who don’t even know there is a fashion design program here.”

Farris said she was very excited about creating the outfits and making sure they are useful yet appealing.

“It really helps you think outside of the box, and figure out how far you can push your materials and where to stop using materials, also, to find interesting things without going overboard,” Farris said.

For example, she said she found fencing and thought it would be a good idea, but realized it wouldn’t be an easy to work with. She said sustainable practices are important to major fashion designers as well.

One of the goals the sustainability office has is to use the two displays to spark new ones, and evolve into a fashion show later in the year.