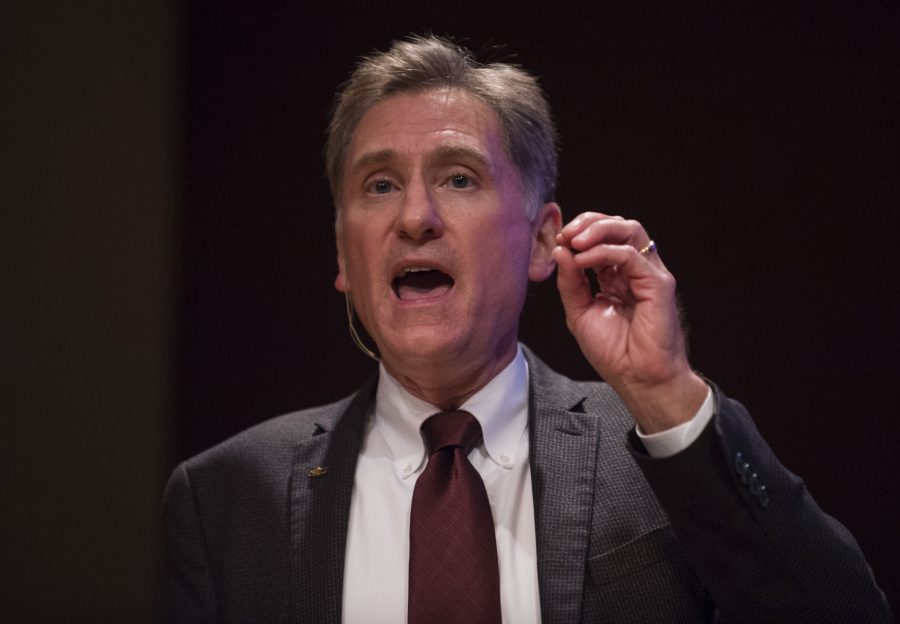 SIU President Randy Dunn talks during his State of the System address Monday, Oct. 17, 2016, at the Student Center in Carbondale.

By Luke Nozicka and Bill Lukitsch

SIU President Randy Dunn on Wednesday said the Carbondale campus should cut at least $30 million in spending and should consider declaring a short-term financial emergency.

The university president also called for the board treasurer to loan money from Edwardsville to Carbondale so the campus can continue its operations. The announcement comes as Illinois is dealing with the longest budget impasse in the state’s history.

The proposed cuts are to be finalized before July 1 and implemented as soon as can be accomplished, Dunn said.

Because there is little indication of a foreseeable resolution at the state level, “prudent management demands that we not reasonably assume state money will be forthcoming anytime soon,” Dunn wrote.

Dunn has said SIU is back where it was at this time last year when the university considered eliminating 180 faculty and staff members. That proposal would have cut programs and services by nearly $23 million — a measure Dunn described as a “doomsday” list.

Interim Chancellor Brad Colwell released a statement Wednesday detailing the cuts at the campus level, which does not include the elimination of academic programs that will likely be announced in the coming months.

The university chancellor said the changes at the university “will be challenging and painful” and “almost certainly include layoffs.”

The number of expected layoffs was not provided, the chancellor said, because it depends on how units address their reductions. The cuts the chancellor’s office identified immediately include $19 million in permanent budget reductions:

$10 million in vacant positions: The university will leave an estimated 158 vacant positions unfilled to “minimize the number of layoffs,” according to the chancellor’s message. Since the budget impasse began, the university has let 293 positions go unfilled. All vacant salary funds will be consolidated into a central account to provide “more flexibility in filling positions where the needs are greatest, regardless of a department’s ability to fund a position within its own budget.”

$535,000 cut for travel: The university is cutting its travel budget entirely, effective immediately.

The additional cuts outlined in the university president’s $30 million directive will be assessed through temporary cuts, the chancellor’s office said. Those include:

$1.5 million in plant and service operations: These cuts would be made by possible outsourcing and reducing operational costs.

$1.2 million from partially self-supporting units: These cuts would be made reducing state funding from the athletics department and 15 centers or initiatives that a committee said could become self-supporting. In his statement, Colwell called these potential cuts “a contentious issue.” These initiatives include the university’s Center for Fisheries, Aquaculture and Aquatic Sciences, WSIU Public Broadcasting and Counseling and Psychological Services. Directors of a majority of these centers interviewed by the Daily Egyptian have said the cuts outlined in the report would significantly harm their units, and in some cases would lead to their closure.

$1 million from academic administration: These cuts would be made by merging departments or colleges. In a previous proposal, university officials suggested merging four academic colleges into two.

$465,000 from School of Law This cut would reduce the school’s budget by 15 percent, which Colwell said reflects the governor’s proposed 15 percent reduction in state funding to higher education for Fiscal Year 2018.

$400,000 from Morris Library These cuts could be made by reducing hours and materials.

$166,000 from Development and Alumni Relations

The Carbondale campus also has to pay back borrowed funds during a 10-year period. For each year, Colwell expects the campus will have to pay back between $8.3 million and $11 million.

For Fiscal Year 2018, Colwell said the campus plans to make those paybacks by cutting:

Between $4.3 million and $7 million from campus units

“It’s terrible for us as employees to feel so unstable and to feel like we’re first on the chopping block,” she said.

The university president’s suggestion that the Carbondale campus declare financial emergency is outlined in the SIU Board of Trustees policies as one of two temporary solutions for resolving a loss of funds. A long-term solution — referred to as a state of financial exigency — would permit the university to lay off tenured faculty.

The university president said the option of exigency should be withheld for later consideration depending upon future state appropriations.

David Johnson, president of the Faculty Association, which represents 500 employees at the university, said there is a real fear among faculty on campus of losing their jobs. Johnson, an associate professor in languages, cultures and international trade, said he hopes the university can preserve its identity as a research university.

“Any cuts are going to be painful,” he said. “No one on this campus is going to be happy with this result. You can’t cut $30 million from a budget of our size without people getting laid off and having an impact on students.”

The cuts wouldn’t be the first for the SIU system as public universities and social services in Illinois struggle through a state budget impasse that is nearing the two-year mark.

Since the state’s budget impasse began in July 2015, the Carbondale campus has reduced $20 million of its approximately $450 million operating budget. That money was saved by making smaller adjustments, such as reducing positions, not undertaking projects, closing grants and not filling vacancies.

The Carbondale campus would take the brunt of the next round of cuts because it received an extra year to identify what needed to be cut from its budget.

If the university is forced to make additional cuts, Dunn said it will use information outlined in the non-instructional program review committee report, which was made public earlier this semester, and a prioritization report on the academic units, which is expected to be sent to the chancellor in May.