At Murphysboro no-kill shelter, ‘They all come in with hard stories’ 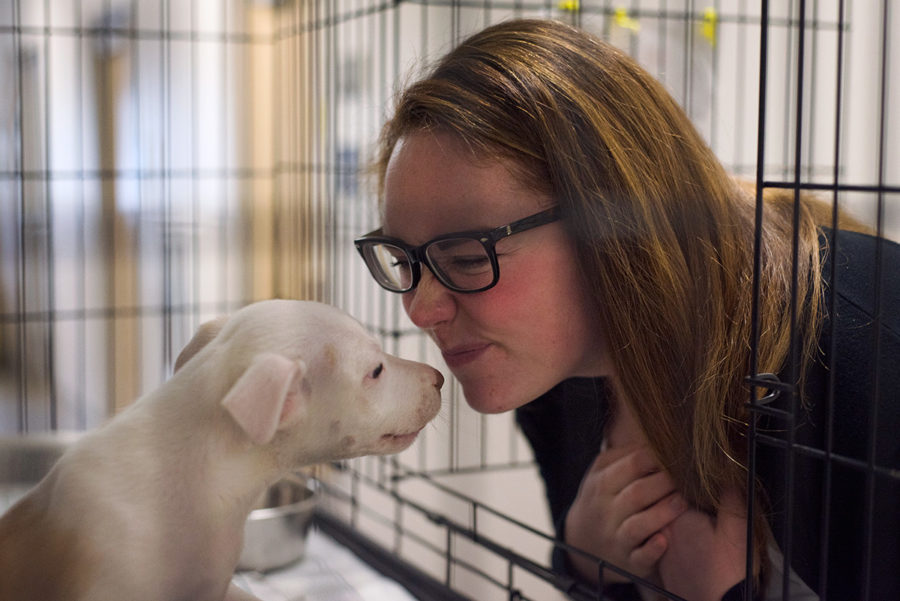 Amy Preston interacts with Izzy, a pit bull mix puppy, on Tuesday, Feb. 14, 2017, at St. Francis CARE Animal Shelter in Murphysboro. Preston began working for the shelter as an event coordinator in January 2016. Izzy was adopted by a new family that day. (Bill Lukitsch | @lukitsbill)

For veterinarian Kay Creese, the best part of her job is seeing patients come back for a visit after they’ve been patched up or found new homes.

“Sometimes six to 12 months later the people come in to show us the dog or the cat,” she said. “And that’s just amazing.”

Creese is the executive director and veterinarian of St. Francis CARE Animal Shelter in Murphysboro. The no-kill animal shelter is a non-profit organization that houses up to 150 animals at a time and does roughly 70 to 80 adoptions per month.

In addition to housing strays, Creese performs about 150 surgeries in a given month. The bulk of those are spay and neuter services, Creese said, but she also treats animals that have experienced physical traumas.

The model of St. Francis differs from state-funded shelters mainly because space is limited and animals are kept until they find permanent homes, Creese said.

“If I don’t have space, I turn somebody away,” she said. “Sometimes I get creative and make space for somebody that’s really in big need. But we don’t have to take everything that walks in the front door.”

The animal shelter receives no government funding and depends on community assistance to continue its mission, Creese said, although the center also charges fees for adoptions and veterinary services. Volunteers donate time, supplies and money to assist St. Francis.

Along with 400 donated volunteer hours a month, Creese said the shelter relies on the work of animal caretakers — a job she said requires a lot of passion.

“You really have to like what you’re doing — [you] have to like the animals,” she said. “Because they all come in with hard stories.”

The shelter got its start in 2006 after a group of animal lovers banded together to solve a shortage of care for stray and abandoned animals in the region. The original location was in Anna, Creese said, a location she dubbed “The Swamps of Anna” because of its frequent flooding problems.

Over the last several years the shelter has changed locations once and built an entirely new main structure to house stray and unwanted animals. Creese became involved with the not-for-profit around 2009, when the shelter was preparing a transition to a 1,000-square-foot house. In 2014, the new structure was built with rooms for surgery, examinations, administrative offices and animal housing.

The rest of the land the shelter occupies is used for outdoor kennels, play yards for adult dogs and separate structures for adult cats and newborn puppies.

Creese said the shelter does what it can to pull animals from local county shelters whenever they issue “kill lists” for unclaimed or stray dogs and cats that can no longer be cared for by the state.

“We try to stay as local as possible in getting animals in need in our area, and we pull as many as we can with space available,” Creese said.

With the advent of the internet and the multiple social media platforms available for widespread communication, Creese said the shelter frequently finds homes for animals across state lines. Some travel from faraway places to adopt cats and dogs, and the shelter’s volunteers take road trips to bring animals to other shelters or adoptive families.

And sometimes, Creese said, volunteers and employees find a cat or dog to call their own after working awhile at St. Francis.

“It’s an occupational hazard,” Creese said, with a laugh. “Everybody has from time to time, you know, gone ahead and adopted one. It’s hard not to. Once in a while there’s just one you can’t walk away from.”