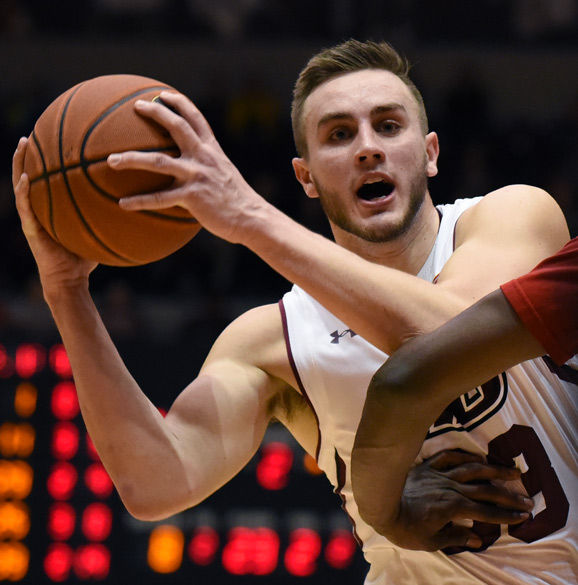 Junior forward Sean O'Brien looks to make a pass during SIU’s 71-59 victory against Bradley on Feb. 17 at SIU Arena. O’Brien led the Salukis in scoring with 24 points in the game.

The National Association of Basketball Coaches recently honored forward Sean O’Brien with a spot on the Division I All-District second team.

According to the Missouri Valley Conference website, the athletes chosen for the first and second team represent the finest college basketball players in America.

Coaches are allowed to nominate players on their team and within their region. O’Brien is coach Barry Hinson’s second player in five years to be placed on the first or second team. Last year, guard Anthony Beane made the first team.

“I nominated Sean for the first team; I thought he was worthy for our region,” Hinson said. “I know I’m biased, but I thought his stats — not only what he has done this year, but over the four-year period of time — made it definitely arguable that I could do that.”

“Coming to college, everyone wants to play a lot and everyone wants to be an all conference player,” O’Brien said. “To finally achieve that my senior year, it’s really rewarding. But looking back on it, I do wish I played a little better down the stretch of the season.”

With his Saluki career at a close, O’Brien said he hopes he will get offers to play for teams overseas.

“It’s been a crazy four years — a lot of guys left, I’ve had a lot of different teammates and been in a lot of different situations,” O’Brien said. “So just coming in every single day not worrying about those things and sticking to what I came here for, which was to be a good player for the Salukis — I never lost sight of that, just working hard everyday.”

But O’Brien said he thinks there are other teammates who also deserve recognition for their performances.

“Him getting on the second team means he is one of the top 10 players,” Hinson said. “I think that is a huge compliment not only to him, but to his teammates, his overall body of work and to our basketball program.”

Sports reporter Gabriella Scibetta can be reached at [email protected] or on Twitter @gscibetta_DE.