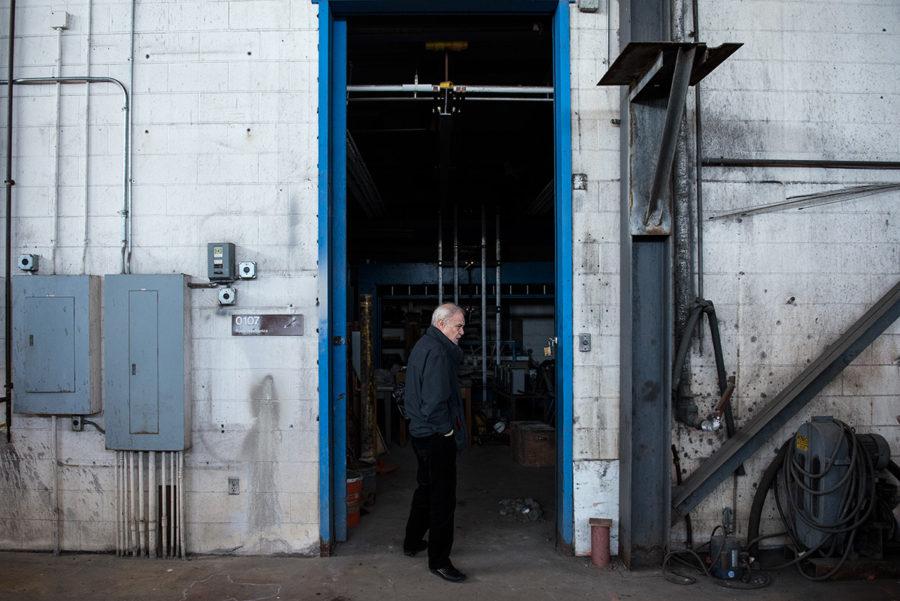 Tomasz Wiltowski, director of the Advanced Coal and Energy Research Center, observes equipment used at the Illinois Energy Development Park on Friday, March 10, 2017, in Carterville. The center is one of 15 centers or initiatives SIU’s non-academic prioritization committee, which was appointed by interim Chancellor Brad Colwell, suggested could become self-supporting with the goal of eliminating state funding by 2022. Wiltowski said community events like Energy Day and energy forums would have to be eliminated if such cuts were implemented. “We have to bring the community together,” he said. “We have to educate the community. What is energy about? What is how to conserve the energy? Like why we are paying such high prices for electricity or gas?” (Jacob Wiegand | @jawiegandphoto)

Dasgupta, who works as a researcher at the university’s Advanced Coal and Energy Research Center, came to SIU from her native country of India in 2003 to earn her master’s degree in mechanical engineering. She worked on her thesis and dissertation at the research center and went on to graduate in 2008 with her doctorate.

“The areas I was exposed to and the guidance I received as a student were invaluable,” Dasgupta said. “It opened doors for me.”

Two years ago, her whole division at the state-run Illinois Clean Coal Institute was laid off because of state budget cuts, and she returned to the university as a researcher in the center.

Now, Dasgupta’s place of employment could be at risk of budget cuts once again.

The Advanced Coal and Energy Research Center is one of 15 centers or initiatives SIU’s non-instructional prioritization committee, which was appointed by interim Chancellor Brad Colwell, suggested could become self-supporting with the goal of eliminating state funding by 2022. This is expected to save the university $5.5 million over the course of five years.

The Daily Egyptian is publishing a series of stories to examine the effect those proposed cuts would have on the university community. This is the eighth in the series.

For the Advanced Coal and Energy Research Center, a loss of state funding would amount to a $335,441 cut, according to the report. Center director Tomasz Wiltowski said such a cut would affect student research capabilities first.

“If the state budget is cut, I would be really reluctant to pay for student positions,” Wiltowski said. “Instead of using the grant to promote research, to grow, I would have to reallocate it.”

The funds listed in the report are used to pay salaries for Wiltowski and two other staff members. Wiltowski said without state funding, those salaries would have to be taken out of the grant money, leaving less for research, scholarships and graduate assistantships.

When it was established in 1974 as the Coal Research Center, coal extraction was the center’s primary focus. In 2014, the name was changed to reflect the array of energy research being done, which includes processes that minimize the environmental impact of burning coal.

ACERC helps faculty, students and other researchers on campus engage in coal and energy-related research by assisting in writing grant proposals, putting research budgets together and providing other resources that may be necessary to carry out research.

The center is also involved with outreach to improve the public’s understanding of advanced coal and energy and its effect on the environment.

“Each director in each center will say ‘My center is very important,’ but energy is a key issue right now for southern Illinois and for humankind,” Wiltowski said. “We have to always think about the future generations, about leaving something for them.”

The proposed cuts would not be the first in recent years.

Since July 2015, Republican Gov. Bruce Rauner and Democrats who control the state Legislature, including House Speaker Michael Madigan, have failed to come to an agreement on a state spending plan. In light of the state’s historic budget impasse, public universities are considering ways to continue operations with the assumption some funding could be cut permanently.

Two stopgap measures passed in the Legislature in 2016 totaled $83 million of financial support for the SIU system. Those funds, for the most part, were used to pay the bills from the 2016 fiscal year. The university started the 2017 fiscal year “basically back at zero” and is dipping into the reserves once again, SIU President Randy Dunn has said.

The 15 institutions or centers identified in the non-instructional prioritization committee’s report suffered a permanent 10 percent reduction in state funding in fiscal year 2016. Others saw additional cuts in fiscal year 2017.

Most of ACERC’s budget comes from the $4.6 million Energy Boost grant. This money was awarded two years ago from the Clean Coal Review Board, a group established by the university in 2000 after the Chicago-based Commonwealth Edison Company gave SIU $25 million to support clean coal programs.

Through this grant, the research center is able to provide seed grants and award undergraduate and graduate scholarships. The funds also support the operation of the Energy Development Park, which is a research complex in Carterville with laboratories and administrative spaces for researchers to conduct their projects.

For the 2015-2016 school year, the center gave out four scholarships of $5,000 each and three faculty grants up to $50,000 each. The grant was also used to fund 20 graduate assistantship positions.

Private funding will sustain the center’s programs and research through 2019, according to ACERC’s website. Amy McMorrow Hunter, the center’s technology transfer specialist, said work is underway to turn the grant funds into a “legacy program” to keep scholarships and seed grants going through support from alumni and external organizations after the $4.6 million grant runs out.

She said the goal is to be able to do this within four or five years, so by 2022, ACERC ideally wouldn’t need state funding to keep its research and scholarships going.

“It’s tough at the university for everybody right now,” Hunter said. “We expect that, as the situation improves, we’ll be able to grow these programs and add new ones on with external support.”

Wiltowski said any move by administration that would affect university research capabilities would be unwise.

“When you have good, high quality research happening on campus, it translates into higher enrollment numbers,” Wiltowski said. “Each potential student knows what they want to come here and do, what opportunities they want to have. We have to become more attractive.”

Although he said the university does need to explore ways to be more financially efficient, Wiltowski said energy research capabilities should not be on the chopping block.

“We have to be smart enough to figure out where to save money and where to invest money,” Wiltowski said.  “Energy research is a smart investment.”

Dasgupta, whose work at the center includes supervising research and assisting in grant writing, agreed that some students would not come to SIU if they didn’t have the research capabilities available at ACERC.

She said she sees students form their own “scientific personalities” under the guidance of ACERC and Wiltowski.

“When students first come here, they follow what we call ‘bookish knowledge’. They don’t have a hands-on approach, and we expose them to equipment and methods rarely available to organizations limited on funds,” Dasgupta said.

“It’s just so sad, the state of affairs here. The students are so eager to learn, but they won’t come if these opportunities aren’t here.”