Trump must decide whether to try to arrest WikiLeaks’ Assange 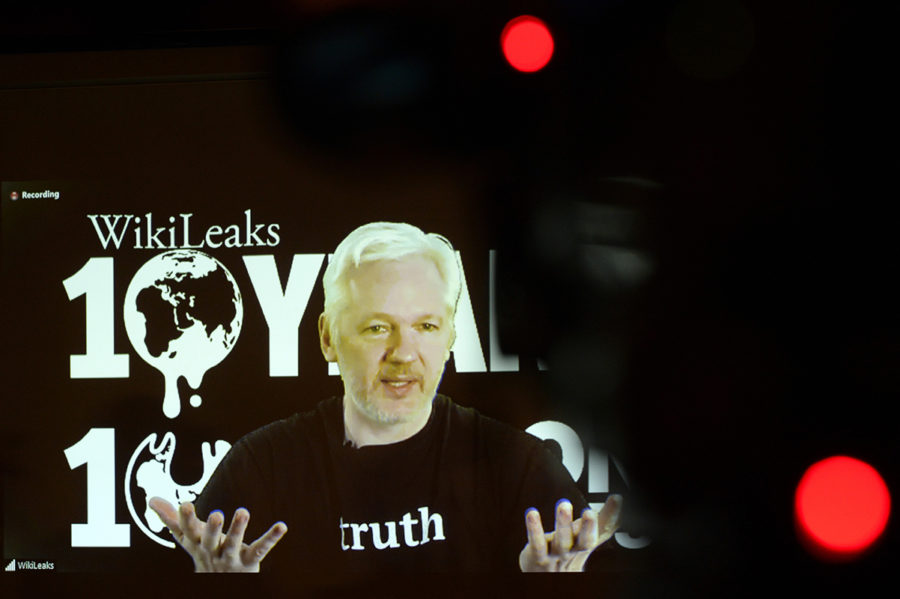 WASHINGTON — For a few years, Julian Assange seemed to have faded from relevance. He took refuge in the Ecuadorean Embassy in London in 2012, fleeing a Swedish investigation into alleged sexual assault. At the embassy, he’s been deprived of sunlight and occasionally his internet access has been cut.

But the Australian founder of the anti-secrecy group WikiLeaks has managed to re-emerge as relevant to U.S. politics, first during the presidential campaign last year and now with a new dump of leaked documents, this time from the CIA.

Again, Assange is waving the flag as champion of transparency and a thorn in the side of the U.S. government, and touting the latest release as “an enormous journalistic scoop.”

His re-emergence presents President Donald Trump with a problem. Trump once praised Assange but now faces the consequences of the CIA leak, and must decide whether to try to bring him to justice. Assange could be charged for publishing classified U.S. military and diplomatic documents in 2010 and 2011. The Justice Department did not respond to a request for comment on whether there is a sealed indictment of Assange..

Assange founded WikiLeaks in 2006. His group espouses radical transparency — and radical it has been. Disgruntled employees now see the theft and delivery of documents to WikiLeaks as a way to get back at unaccountable bosses and institutions. Encryption has become a requirement. The boundaries of privacy have changed.

“There’s absolutely no doubt in my mind that WikiLeaks has really transformed the media and political landscape, and not necessarily for the better,” said Nicco Mele, director of the Shorenstein Center on Media, Politics and Public Policy at the Harvard Kennedy School.

“If you are a leader of any kind, whether a publicly elected official, a CEO or a president of a university, you now operate under the assumption that anything you put in writing electronically can find its way to the public domain, and that’s a sobering and dramatic change,” Mele said.

For those who believe that those in power have become less accountable, Assange is a hero. And for politicians running against the establishment, as Trump did in 2016, WikiLeaks and its relentless publication of documents and campaign emails of opponents are a bonanza.

“I love WikiLeaks,” Trump said at a campaign rally Oct. 10 in Pennsylvania. “It’s amazing how nothing is secret today when you talk about the internet.”

WikiLeaks’ latest publication involved 8,761 documents from a CIA unit engaged in global hacking. The documents revealed the unit’s abilities to take over smartphones, activate microphones in smart television sets and even implant malicious code on devices not connected to the internet. It helped support the notion of an untrustworthy government interfering with individual freedom and capable of eavesdropping on our living rooms, bedrooms and offices.

Assange has plenty of U.S. enemies.

“Julian Assange should spend the rest of his life wearing an orange jumpsuit,” Sen. Ben Sasse, R-Neb., said Thursday. “He’s an enemy of the American people and an ally to (Russian leader) Vladimir Putin.”

While Trump has not spoken about Assange since taking office Jan. 20, Vice President Mike Pence was highly critical of WikiLeaks’ release of the leaked CIA documents.

Still, the world has embraced the WikiLeaks model of seeking anonymous information. The New York Times and The Washington Post seek “confidential” news tips on their websites, including anonymous drops for databases. The Panama Papers, last year’s investigation of offshore corporations in which hundreds of journalists worldwide participated, was based on millions of documents leaked from a Panamanian law firm and delivered to a German newspaper.

In recent years, Assange has managed to turn some supporters into opponents and has been questioned for what some perceive as an anti-Western position.

“They started off with a lot of trust, radical but in a different way,” said John Wonderlich, executive director of the Sunlight Foundation, a nonpartisan advocacy group for transparency in government.

He called the group “a brand and a banner that captured market share for disruptive data releases.” But as time went on, Wonderlich said, Assange expressed his desire to abolish traditional political parties and his anti-U.S. views.

“For people who see the United States as their primary adversary in the world, they would see WikiLeaks as an ally,” Wonderlich said.

Wonderlich said Assange in 2016 voiced his clear distaste for Hillary Clinton, and WikiLeaks engaged in what Wonderlich called “reckless insinuation” over the unsolved murder of Seth Rich, a Democratic National Committee staff member who was shot to death in Washington July 10.

“They were clearly insinuating that the staffer was their source (for leaks on DNC emails) and murdered in retribution, and I felt that was reprehensible,” Wonderlich said.

Assange and his supporters have also shown a thin skin, he said.

“They are a bully, and any questioning of their intentions tends to lead to immediate threats,” Wonderlich said.