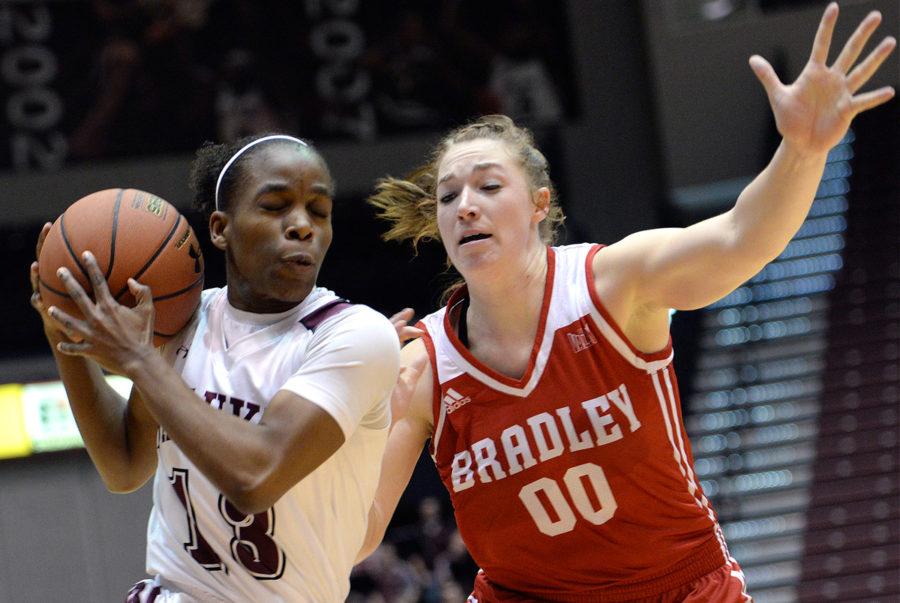 In Missouri Valley Conference basketball tournaments, the matchup of the No. 4 and No. 5 seeds is supposed to be as equal of a matchup as any.

On the women’s side, the matchup between No. 4 SIU and No. 5 Wichita State was exactly that for about 37 of the full 40 minutes.

But Wichita State’s experience and leadership showed down the stretch as the team pulled away late for a 73-60 win.

For the first three quarters, the two teams almost matched each other bucket for bucket. The lead changed hands five times and neither team led by more than seven.

Senior guard Rishonda Napier and junior guard Kylie Giebelhausen were the workhorses they have been all season, scoring 10 points each before the final quarter. The problem for SIU was its efficiency. Napier went 4-16 from the floor for the game while Giebehausen went 6-16.

Their star player counterpart, Shocker junior forward Rangie Bessard, appeared to be held in check through the first half, scoring only nine points. However, halftime did wonders for Bessard as she was nearly unstoppable in the second half.

“I feel like we were able to run our plays and get the ball to the spots we wanted,” Napier said after the game. “We just couldn’t come up with those defensive rebounds and it was too much Rangie.”

After Saluki senior forward Carlie Corrigan hit a 3-pointer to extend SIU’s lead to seven with less than five minutes to go, Bessard went on a 7-0 run of her own to tie the game.

Wichita State entered the fourth quarter with a two-point lead and didn’t squander it for the rest of the game.

SIU pulled within two points with 3:40 to go, but began to catch the turnover bug. The Salukis only hit one more shot as WSU mounted a 14-2 run to end the game, iced with two layups from Bessard, who finished with a game-high 31 points.

After playing in what may have been her final game of her career, Napier became emotional and nostalgic.

“My freshman year, as a team, we went to the athletic director and we shared our vision for this program and what we want for the Salukis and we asked him to bring in somebody that will take us there,” she said, fighting back tears. “[SIU coach Cindy Stein] accepted the job with a bunch of knuckleheads with all the talent in the world, but we lacked discipline and we lacked toughness. This is my last game and I went out with three winning seasons in a row, and that’s because of her.”

The fate of SIU’s season now rests in the hands of postseason tournament organizers. The Salukis played in the Women’s Basketball Invitational last season and are waiting to find out if they earn a bid to the same or similar tournament this season. If not, their season is over.