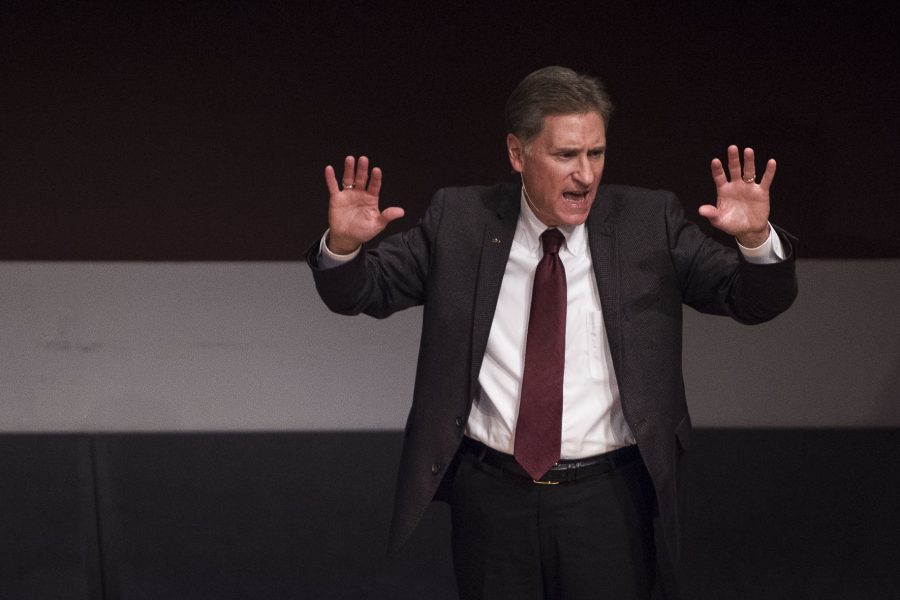 SIU President Randy Dunn on Wednesday said SIU cannot operate for another 20 months without state support “short of hollowing out” its core programs.

In the System Connection, the university president’s column emailed to faculty and staff, Dunn said SIU will have to make a case for continued stopgap appropriations if Illinois does not pass a budget for an additional two years — something Dunn described as a worst-case scenario.

If Illinois does not pass a budget for another 20 months, Dunn said SIU would be forced to gouge the core of its campus programs, services, facilities and regional support projects through another round of budget cuts. He said “the lion’s share” of those reductions would be felt by the Carbondale campus and would go into effect before July 1.

This would come after a “pounding our regular operations have taken,” Dunn wrote in the column.

Dunn’s column comes a day after he and other representatives of state universities testified before the Senate Higher Education Committee. The News-Gazette in Champaign reported Dunn told the committee SIU is reviewing whether to eliminate departments and possibly an entire college.

“If we have to go there, it will be significant and send a tectonic shock through southern Illinois,” he said, according to The News-Gazette. “… If you get away from the fiscal analysis, we have a public university system here in Illinois that in the higher education marketplace is just about to go to junk bond status.”

Dunn said SIU is back where it was at this time last year when the university considered eliminating 180 faculty and staff. That proposal would have cut programs and services by nearly $23 million — a measure Dunn describes as a “doomsday” list.

In January, Dunn told the Chicago Tribune the situation feels like “Groundhog Day.”

“I understand it may be very difficult to see a path by which we get a budget done, possibly even for the next two years,” Dunn told the Tribune. “What we won’t be able to live with is going that period of time without some sort of stopgap appropriation or more limited spending authority … it’s an untenable situation.”

Since July 2015, Republican Gov. Bruce Rauner and Democrats who control the state Legislature, including House Speaker Michael Madigan, have failed to come to an agreement on a state spending plan. In light of the budget impasse, public universities are considering ways to continue operations with the assumption some funding could be cut permanently.

Two stopgap measures passed through the Legislature in 2016 totaled $83 million in financial support for the SIU system. Those funds, for the most part, were used to pay the bills from the 2016 fiscal year.

The university started the 2017 fiscal year “basically back at zero” and is dipping into the reserves once again, Dunn has said.

University officials have since created situational proposals, one of which suggests cutting state funding from 15 institutions or centers that a prioritization committee says could become self-supporting. Those include SIU’s Clinical Center, the Office of Economic and Regional Development and WSIU Public Broadcasting.

Six of seven directors interviewed by the Daily Egyptian in a series to examine the effects of those cuts have said their units could not operate without laying off faculty.