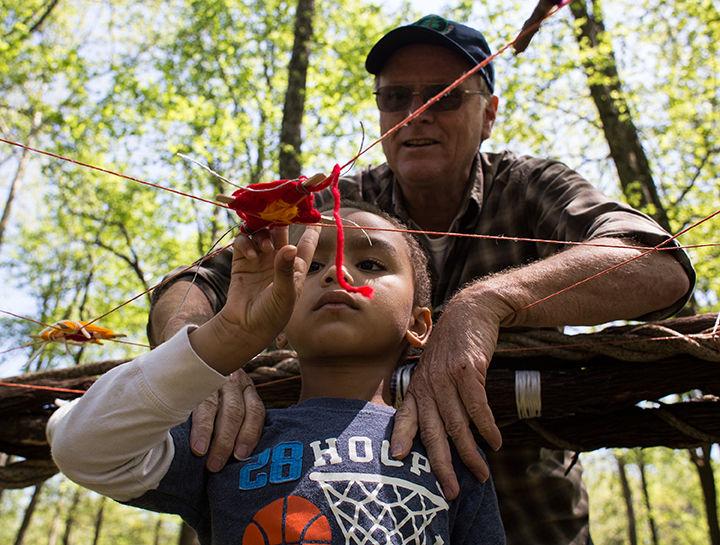 Caleb Fredrickson, 7, of Carbondale, looks at an "eye of the world" he tied onto a dreamcatcher with the assistance of Randy Osborn, the executive director of the Boys and Girls Club of Carbondale, Saturday, April 23, 2016, at Touch of Nature Environmental Center. The club, which partnered with Carbondale Community Arts, received a grant from the National Endowment for the Arts to implement community art projects, Osborn said. Since then, seven community art projects have been completed through the "Here We Live: Arts Build Community" series. One of the goals of the project was to beat the current world record holder for the largest dreamcatcher, which according to Guinness World Records has a diameter of 9 feet, 10 inches. The dreamcatcher constructed for Saturday has a diameter of 14 feet. "We wanted people to think about the dreams they have, an aspiration," said Osborn, referring to why participants tied "eyes of the world" onto the dreamcatcher. (Aidan Osborne | Daily Egyptian)

By Marnie Leonard and Luke Nozicka

Among the commotion of children darting through obstacle courses, families eating pancake breakfasts and local blacksmiths putting on demonstrations at Touch of Nature Environmental Center, JD Tanner made sure the festivities ran smoothly.

“Show me a list of universities that have a Touch of Nature and maybe I’ll change my mind, but this is what makes SIU unique,” Tanner, the center’s director, said while gesturing toward those gathered on a recent Saturday for the annual Maple Syrup Festival. “To me, one of the most important things for a university to do is community outreach.”

Touch of Nature, which sees about 12,000 visitors annually, is one of 15 centers or initiatives SIU’s non-academic prioritization committee suggested could become self supporting with the goal of eliminating state funding by 2022. This is expected to save the university $5.5 million in five years.

The Daily Egyptian is publishing a series of stories to examine the effect those proposed cuts would have on the university community. This is the sixth in the series.

The Maple Syrup Festival is one of many community and student programs the environmental center oversees. Others include summer camps, team-building retreats and environmental and adventure education programs. About 80 to 90 university-affiliated groups visit the center’s 3,100 acres each year.

The non-academic prioritization committee suggested cutting $475,361 of state funding from Touch’s budget, which Tanner said is used for office and groundskeeper staff salaries.

The rest of the center’s budget is made up of the revenue generated each year from rental fees and ticket sales from programs, retreats and weddings held on site. In 2016, this amounted to $510,000.

Tanner said if state funding is cut off, he would have to double what the center made last year in programming revenue. This would be possible, he said, if the budgetary reductions occur gradually over a five-year period.

However, if the environmental center receives cuts more quickly than it can make up for with increased revenue, Tanner said staff positions could be lost, which would lead to fewer available student programs.

“Without those positions, I don’t have anybody to work with the students,” Tanner said. “One person can’t do all that by himself.”

Tanner is the first director interviewed in the Daily Egyptian’s series who said his unit could eventually operate as it does now without state funding. Directors of other centers named in the report, including the Office of Economic and Regional Development and the Cooperative Wildlife Research Laboratory, said they would be unable to operate without it.

“The list just goes on and on of student experience opportunities that we provide to the university,” Tanner said. “You’re going to get a lot more out of coming here than just sitting in a classroom all the time.”

Steve Gariepy, who has worked as Touch’s environmental education program coordinator for more than three years, said students who have recently graduated and helped at Touch have gone on to work at the National Park Service and Montana state parks.

Gariepy said those students have told him they are more skilled than some of their professional colleagues because of their experiences at Touch.

Molly Maxwell, a graduate student studying recreation administration, said she came to the university in 2015 because Touch offered her a graduate assistantship. She coordinates the environmental education program, which includes overseeing programs, scheduling events and office management. She helps with everything from maple tree tapping to trail building.

“I’ve learned more from my project and my assistantship than I really have in school,” Maxwell said. “The opportunities we have here for students are endless.”

Before coming to Illinois, Maxwell received her undergraduate degree from Appalachian State University in North Carolina. She said Touch of Nature’s programs and the southern Illinois landscape draw students to SIU.

“When I thought of Illinois I thought of cornfields and flat spaces,” she said. “Realizing there were all these opportunities for rock climbing and mountain biking and things was my deciding factor to come here.”

Maxwell said reducing the center’s programs would be “really negative” for the SIU students and community members who rely on Touch.

“We give students experiential education,” she said. “Community members send their kids to our summer camps — they expect those things to be there.”

One such summer camp is Camp Little Giant, a therapeutic recreation camp for kids and adults with abilities and disabilities. The camp, where children can enjoy outdoor activities such as campfires, horseback riding and hikes, among others, was the first of its kind created in the country in 1952.

As a way to generate more revenue, Touch is trying to increase the number of weddings it puts on each year, said Lauren Bonner, the environmental center’s wedding and special events coordinator. She said the center hosts about 10 weddings a year.

Bonner, who started at Touch in March 2014, said she has met some of her best friends at the center.

“It’d be a let down for students,” she said. “Touch of Nature is a really hidden gem and I hope that more people come to know about it.”

In the three years Tanner has been director, Touch of Nature has lost two full-time employees who left for jobs elsewhere. Those positions remain unfilled. The center has increasingly relied on student and community volunteers to help staff events, he said.

With no state funding, Touch of Nature would operate like a business, Tanner said. Its current operational model is part non-profit, part business.

For example, Tanner said the center is happy to break even for happenings like Breaking the Surface, a free bi-annual community paddling event. Under a full-business model, turning a profit would become the focus.

But before Touch of Nature can operate as a business, Tanner said, the university has to infuse cash into it to repair and update facilities.

“If they help us out, it’s doable,” Tanner said. “We’re going to have to change the way we approach things, but if we have time we’ll make it work.”

As for Gariepy — who initially started helping out at Touch in 2005 and created its Breaking the Surface event — he said one of the best things they do is simply connecting people to nature. He said children who at first don’t want to go on field trips to the environmental center leave saying, “You know, I think nature is all right and I like it now.”

Environmental education is crucial for the future, Gariepy said, because those children could grow up to become lawyers or judges who make decisions about the environment.

“People don’t think being outside is their thing until they get here,” he said. “The more we can get people in nature, the better off we are going to be as a culture.”

Gariepy, who is one of five family members who collectively hold eight degrees from SIU, said Touch is a historic piece of the university, one he believes most people are unaware of.

The environmental center was created by then-SIU President Delyte Morris and William “Bill” Freeberg — who worked as SIU’s first chairman of the Department of Recreation and Outdoor Education. At Indiana University, Freeberg was the first student in the nation to complete a doctorate of recreation and later helped establish the National Special Olympics Program.

Touch of Nature, which the National Park Service named a National Environmental Center Landmark in 1972, got its name from the William Shakespeare quote, “One touch of nature makes the whole world kin!”

“The fight for the environment is a continuous fight,” Gariepy said. “It will always be as important as ever. We can’t get back what we lose.”

Staff writer Luke Nozicka can be reached at [email protected] or on Twitter @lukenozicka.