Rauner, Mendoza continue feud over how to pay workers 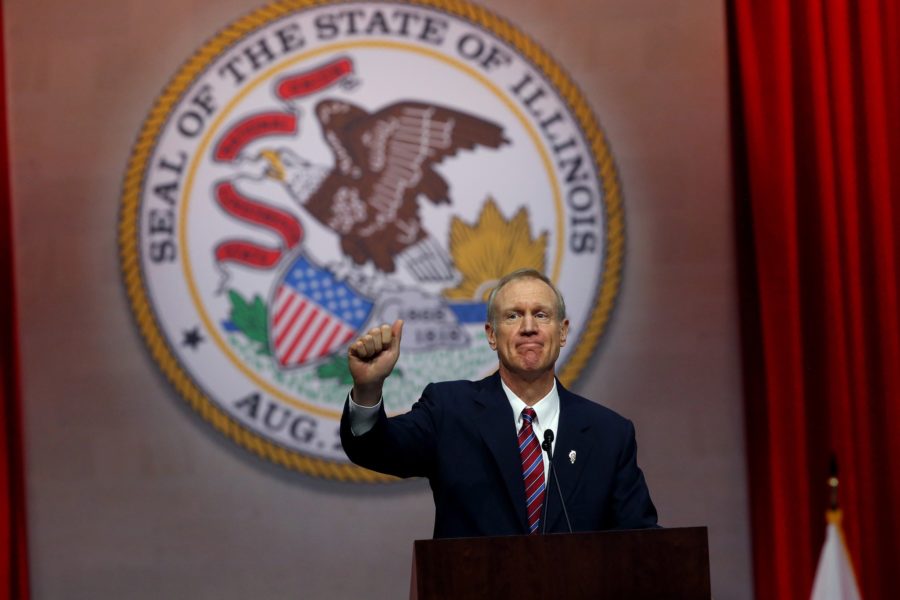 Gov. Bruce Rauner gives a thumbs up after giving his first speech as governor on Monday Jan. 12, 2015 at the Prairie Capital Convention Center in Springfield, Ill. (Nancy Stone | Chicago Tribune)

By Doug Finke | The State Journal-Register

Republican Gov. Bruce Rauner took his feud with Democratic Comptroller Susana Mendoza to court Monday, asking the legal system to step in and decide how nearly 600 state workers should be paid.

The Rauner administration, though, argues that Mendoza’s move would violate a 2015 order from the same court that has kept state workers being paid despite the lack of a state budget. The governor’s office also says the court needs to act quickly or the workers would be in danger of missing a paycheck, which would be a violation of the court order.

“The comptroller lacks the power to ignore this court’s order just because the comptroller is not satisfied with the source of funds for paying state employees,” the lawsuit says. “Put simply, her duty is to process all payroll vouchers submitted to her by CMS and other state agencies.”

Mendoza said former Comptroller Leslie Munger, a Republican, paid the 578 workers at the Department of Central Management Services from the revolving funds, just as Mendoza wants to do now.

“Now Governor Rauner suddenly wants to hoard those funds which he has tellingly renamed ‘government shutdown prevention funds’ and instead raid the state’s General Revenue Fund, which would take critical funds away from nursing homes, hospice care and care for the disabled,” the comptroller said in a statement.

Mendoza said the workers should be paid from the revolving funds that have $93 million sitting unused in them rather than the general fund where there is a $12.5 billion bill backlog.

Mendoza said in her statement that the only reason to raise the issue now is to “manufacture a phony headline about state employees in ‘danger’ of missing a paycheck.

“No employees will miss any paychecks if the administration uses the money that the General Assembly authorized them to use and the governor signed,” Mendoza said of the two revolving funds. “The administration can continue using those funds for payroll as they always have. Or they can choose to create a phony crisis for P.R. value and continue playing politics with people’s lives.”

The lawsuit was filed shortly after Rauner’s office released a video directed at state employees and critical of both Mendoza and Democratic Attorney General Lisa Madigan. He accused Madigan of trying to foment a government shutdown because she tried to dissolve the court order that has kept workers being paid. The court refused, and Madigan is appealing.

“Since the court ruling, Comptroller Mendoza has been looking for other ways to create a crisis and force a shutdown of state services,” Rauner says in the video. “The latest attempt to force a crisis is a clear violation of a court order to pay state employees. It’s part of a pattern we’ve seen — trying to create a crisis that would force another incomplete, stopgap budget or a massive tax hike with no changes to our broken system.”