Members of Saluki Spirit Squad challenge definition of a sport 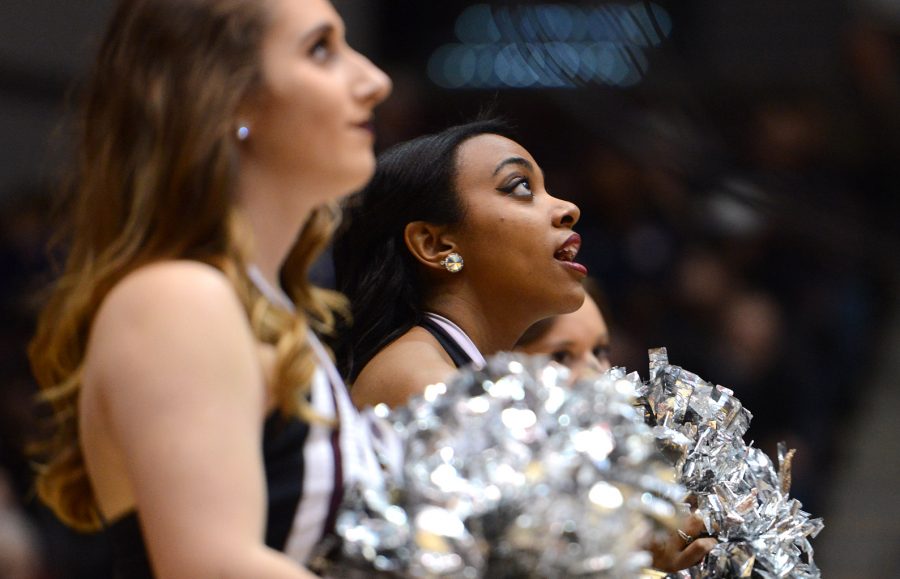 The university does not consider members of the SIU Spirit Squad to be athletes, which might have saved the cheerleaders, dancers and mascots from budget cuts.

Some members of the Spirit Squad see it differently.

“We put in the same time management as everyone does and the same amount of effort. They practice probably as much as every other sports team practices,” said Madeleine Cravens, a first-year member of the Saluki Shakers.

The university announced in January that the men’s and women’s tennis teams were being eliminated and the number of scholarships for swimming reduced because of budget problems.

Cravens said she and others on the Spirit Squad were surprised they were not cut, because they see themselves as athletes.

The university, however, does not.

“They are not considered intercollegiate sports teams,” Associate Athletic Director Tom Weber said. “They are housed in athletics as the spirit group.”

He said the 38 members of the Spirit Squad do not attend SIU on athletic scholarships. Instead, they are primarily volunteering their time. But, Weber said, they still have the same benefits athletes have, including use of the weight room, access to the training staff, a coach and regular practices.

Spirit coordinator Kelsey Baden said members receive a tuition stipend at the end of the year that is divided depending on a number of factors, including GPA, number of games attended and history with the team.

Weber said the financial pressure on the athletics department influences everyone.

Cravens said it’s difficult to work with the budget set aside for her team.

Some members said it is difficult to have time for a job while on the team, but the average stipend helps pay for textbooks each semester.

Unlike other teams in the athletics department, most of what the squad does is paid for out-of-pocket.

“When we go compete at nationals, that’s out of our pocket,” Cravens said. “We have to pay our way to Florida, or fundraise to do everything and I don’t think that’s very fair. We are doing this for SIU. The least they could do is pay for us to go somewhere, or go out and eat together for once, so I would like to see them give us the same amount of time or money everyone else gets.”

The Spirit Squad appears at every volleyball, basketball and football game. Most recently, it traveled to St. Louis for the Missouri Valley Conference tournament.

According to multiple people on the cheer squad, Saluki cheerleaders dedicate between 15 and 20 hours to weight lifting, practices and games every week.

“We spend a lot more hours at games … than people realize,” Cravens said. “We are there before the so-called athletes are every game and we put in as much time as they do, and do the same things they do.”

Fourth-year SIU cheerleader Hannah Schmitz agreed that joining the cheerleading team is a bigger commitment than most people realize, encouraging those who don’t consider it a sport to come observe one of their practices.

“You don’t really have an offseason, and it takes a lot of work and a lot of time with some would say a little reward,” she said.

Chloe Isbell, a Saluki Shaker in her last season, said the idea that the dance team isn’t considered a sport is one that every member on her squad has heard.

“Most people think that because it’s not a two-hour game on a court with some type of ball that it’s not a sport,” she said. “But come to our practice, come to our lifting, try to turn for 28 counts and not fall.”

Sports reporter Gabriella Scibetta can be reached at [email protected] or on Twitter @gscibetta_DE.