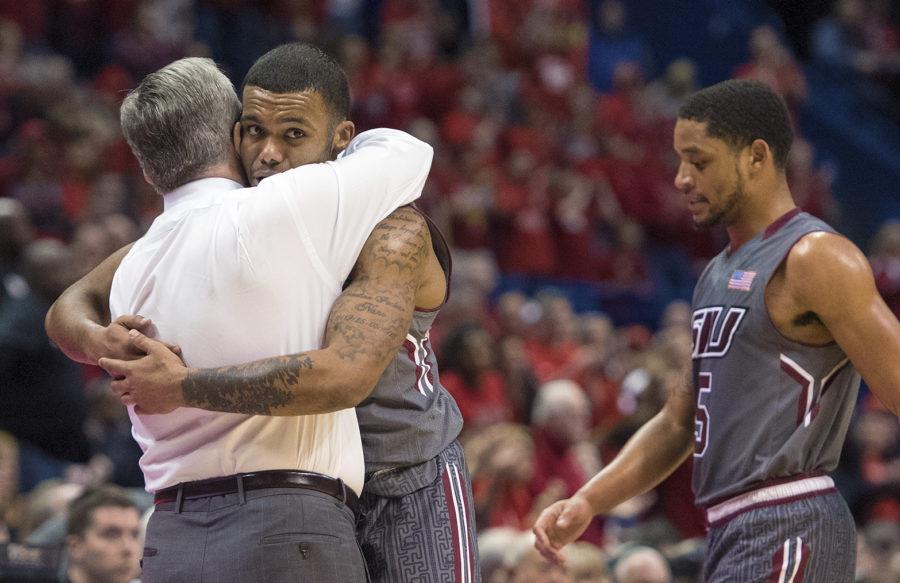 The Saluki men’s basketball season came to an end Saturday after a loss to Illinois in the semi-finals of the Missouri Valley Conference tournament.

The Redbirds beat the Salukis in all three of their meetings this season, with a 63-50 final score to secure Illinois State a spot in the MVC championship game.

ISU took control from the game’s opening tip, going on an 8-0 at the start of the first.

Sophomore guard Sean Lloyd gave the Salukis a spark and was able to get them within three points after his pair of triples in the opening minutes.

“I think Sean Lloyd was established. He can be the guy for our basketball team,” Coach Barry Hinson said. “[He] can be a defensive stopper, and then now he can also score.”

The Redbirds went on to show why they were the No.1 seed in the Missouri Valley Conference coming into this tournament.

SIU couldn’t do anything defensively to stop the Redbirds 3-point barrage in the first half. They shot 9-15 (60 percent) from behind the arc in the first half — a lot of their runs sparked by a 3-pointer.

“That goes for anything if they’re hitting shots like that,” senior guard Mike Rodriguez said.” They’re able to beat anybody in the country.”

The Salukis went into halftime trailing 43-20.

“We have not yet played our best basketball,” Hinson said. “I wish I could put a thumb on it. We never got all three [seniors] going.”

Illinois State started the second half just like they did the first.

After sophomore guard Armon Fletcher made a jumpshot for the first basket, ISU went on a 9-0 run — all 3-pointers — to give them a 30 point advantage.

The Salukis showed some signs of life late, going on two 9-0 runs and finally a late game push to get themselves within 13 points.

“I kind of stopped looking at the scoreboard,” Rodriguez said.” I kind of just went into — just reminiscing my last couple minutes of college basketball. So I just realized that we lost by 13 at the end. I think we were just playing just because it was the last time together.”

That surge came too late in the game and Illinois State walked away with a 63-50 victory.

Illinois State will advance to the championship game at 1 p.m. on Sunday against the winner of the Missouri State and Wichita State matchup in the Scottrade Center.