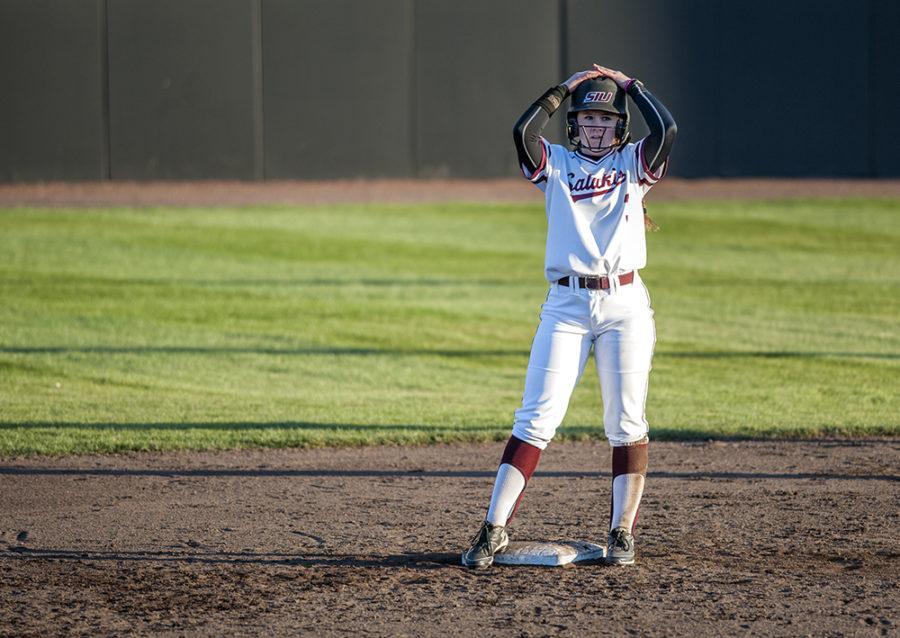 Freshman outfielder Susie Baranski rests at second base Friday, March 3, 2017, during SIU's 1-7 loss to the University of Kentucky at Charlotte West Stadium. Baranski had one hit and one RBI during the game. (Morgan Timms | @Morgan_Timms)

The tables turned for the Salukis after their rough start at the Coach B Classic.

Southern Illinois (9-8) took on Western Illinois University (4-10) in the second day of the tournament, and ended up on top, 3-2.

To start off the game, the Salukis were first up to bat as the visiting team for the matchup.

Freshman RF Susie Baranski made the first offensive move on a line drive single up the middle in the first inning.

Senior 1B Shaye Harre took a free walk to first on an interference error call off the catcher that reached out too far during retrieval of pitch.

But the first opportunity for SIU to score came to a quick end off a fly ball to Western first baseman Holly Hoelting.

Savanna Dover took the mound for the Salukis and delivered a good portion of her pitches to the Leathernecks as too low or too high.

The SIU defense backed up Dover with great fielding and quick hands with attempted offensive breakthroughs.

The top of the fourth was the turning point for the Salukis where junior 3B Sydney Jones made her way home after a line drive double hit down the foul ball line in left by 3B Merri Anne Patterson.

Defensive plays were also noted for Western when OF Jasmine Lara dove on a line drive to center field to advance to the bottom of the fifth inning.

Lara then held up the first hit for Western during the bottom of the fifth inning on a ground ball out to left field for a single, but then was called out at first for leaving the base too early.

Brianna Jones was brought in for the Salukis to relieve Dover in the sixth inning.

Jones has pitched 51 innings so far this season, reaching 136 pitches yesterday. She is 5-6 currently.

Western tied the game up in the bottom of the sixth after a pop fly to right field error advanced OF Rachel Beatty to second base.

Then third baseman Kelsey Marlow singled and brought Beatty home to put the Leathernecks back on the board.

The tied score brought the game into extra innings, and LF Eyrika Brandenburg hit a single to bring the runner on third home to score the winning run.

Vermejan was hit by a pitch and took her base before Baranski was brought home by Brandenburg, who hit a double into the outfield for the Salukis to take the 3-1 lead.

Jones allowed one hit up the middle to bring one more run for Western before the final out to end the eighth inning with a score of 3-2 Salukis.